Medicine: Who Should Make Choices for You?

An alternative to the FDA system

Almost a decade ago, I went to Canada to obtain a customized medical procedure on both of my eyes—a procedure not yet approved by federal authorities in the United States.

It involved a new “wavefront” LASIK technology designed for patients with a combination of astigmatism and very thin corneas. For more than four decades (since third grade), I wore eyeglasses because of extreme nearsightedness. My longtime eye doctor, who had earned my confidence, monitored my condition and the technologies available for correction. The type of sophisticated LASIK my particular condition necessitated wasn’t available. Then one day he told me, “Larry, what you need you can get now but only in Canada because the FDA hasn’t signed off on it here yet. I can send you to a clinic in Windsor, Ontario, if you want to give it a try.”

As an economist, I knew about the FDA and its record of denying people critical drugs and operations. Providers routinely spend a fortune in time and money until bureaucrats, remote from the needs and knowledge of patients and their doctors, get around to stamping “approved” on applications. I had no interest in satisfying bureaucrats I had never met and whose incentives were all lined up against me. All that mattered to me was my doctor’s judgment and the reputation of the clinic he recommended. I drove three hours to Windsor, had the procedure, and ever since have enjoyed perfect vision without glasses (except for reading).

My story is trivial next to that of untold thousands facing much more serious conditions. My life was not in danger. But what about Abigail Burroughs? 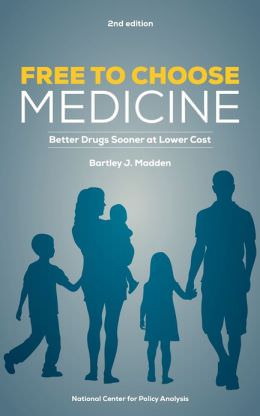 I first learned of Abigail when I recently read a powerful little book, Free to Choose Medicine by Bartley J. Madden, a senior fellow at the prestigious National Center for Policy Analysis. I was touched by Abigail’s spirit. Afflicted with neck cancer as a teenager, she advised her high school graduating class, “Success is fleeting, but when all is said and done, all you have is your character.”

Abigail’s highly respected oncologist believed that a drug called Erbitux might be the only thing left that could help her. The problem was, her cancer wasn’t in the right place. Erbitux showed promising results in other parts of the body that were approved for clinical trials but the FDA wouldn’t allow it yet for Abigail’s cancer. She passed away at the age of 21, before the agency gave Erbitux its official blessing. Days before she died, she appealed to a national television audience, “This is not just about me. This is about so many others.”

A few of those others are briefly profiled in Madden’s book. Each one, and tens of thousands more every year, could have benefited from the advice of their physicians—advice that was put on hold by people in Washington that neither the patients nor their physicians ever knew. Those who made the decision to deny drugs or procedures will never be held accountable. They will never have to apologize to anyone. Their decisions trumped the choices of the people most affected simply because they had “good intentions” and the force of government in their hands. Tough luck, Abigail.

This is the deadly and often overlooked side of government regulation. Textbooks teach us early that regulation prevents bad things from happening. They rarely tell us about the good things they stifle and the lives they take or subject to prolonged suffering. Studies pour forth showing that the FDA has likely cost far more lives than it has saved, but the agency maintains a cult-like following. Some Americans put more faith in faceless bureaucrats and ideological bumper stickers than in the choices of patients and professionals closest to these serious problems. This is a dilemma that cries out for a solution. Can you fault Abigail Burroughs for complaining about the status quo?

A solution is precisely what Madden offers, and an eminently reasonable one it is. Free to Choose Medicine makes a case for the freedom of informed patients to make some choices they don’t currently have—choices that could significantly improve their health or even save their lives.

Allow me to digress for a moment to make a point. Federal law tells us that no one but the U.S. Postal Service can deliver first class letter mail, even though there’s plenty of competition and exemplary service in every other class. Years ago, defenders of the law claimed that only the government could do the job, but their modern-day allies are usually too embarrassed to say so today. The federal monopoly on letter mail persists purely because of inertia and the lobbying power of special interests.

Let’s suppose there’s something magically different about letters that requires a government monopoly. Repealing the law would have no effect because people would just continue to patronize the monopoly as the best and only viable option in town. But if that claim is incorrect, then we might find out in a hurry how inefficient that monopoly is. Competing providers could teach us things about mail we never thought possible before.

Introducing choice is essentially what Madden proposes for a corner of life far more important than who can put birthday cards in a box at the end of your driveway. Right now, the FDA is a deadly “bottleneck in the drugs-to-patients system” because it unnecessarily delays the approval of new drugs (and of new medical procedures as well). Its excessively expensive and time-consuming testing requirements stifle the flow of investment capital to fund life-saving innovations.

As Nobel Prize-winning economist Vernon Smith points out in the foreword to Free to Choose Medicine, the problem is inherent in the regulatory system: the incentives for the FDA to delay a drug or procedure that could save lives are far greater than the incentives to approve one that might have safety or efficacy risks, no matter how many people may suffer or die as a consequence of the hold-up. Madden would allow for a new “Free to Choose track” so that people like Abigail Burroughs could exercise choice:

Instead of the current one-size-fits-all regulatory straitjacket that assumes everyone is equally risk-averse, patients could express their own unique preferences for risk versus the opportunity for health improvement. They make the tough decisions guided by their doctors’ and their own judgments about pain, the limited ability to work or perform daily chores, and the likely progression of their specific disease. These are judgments that only they can make. Patients could elect to use only FDA-approved drugs that were tested on a population of clinical trial patients who were very similar as to health conditions. Or, on the new track, patients under the care of their physicians would be able to access not-yet-approved drugs.

Madden’s blueprint incorporates a proposal for a database that would permit convenient access to the information doctors and patients need to assess risks and potential benefits. He anticipates and refutes the likely objections to freedom of choice, including the old “you would cause another thalidomide tragedy” canard that comes up every time someone questions the FDA’s monopoly power. His book provides not just a creative solution but a very good, easy-to-understand explanation of how the current system works (and doesn’t work). As to whether we’d be better off without an FDA altogether, you can be on either side of that issue and still find Madden’s choice proposal compelling.

Want to learn more? Read the book, which you can secure from www.ncpa.org or from Amazon. Visit www.freetochoosemedicine.com for current information on the proposal’s progress. There you can also learn how to become part of a new movement to advance choice in this critical area of health care. You should also take a look at a website co-founded by Abigail Burroughs’ father .

By spreading the word and getting involved, you can not only advance freedom, you can save lives, too. So what are you waiting for?

John Wilkes: The Hero of Liberty Who King George III Arrested for ‘Sedition’

Why Heroes Matter—And Now More Than Ever

The Senator Who Saved America From FDR’s Court-Packing Scheme