Meals on Wheels: Anatomy of a Fake Budget Cut

Another day, another fake story.

The annual budget for our bloated and sclerotic federal government consumes about $4 trillion of America’s economic output, yet President Trump so far has not proposed to reduce that overall spending burden by even one penny. 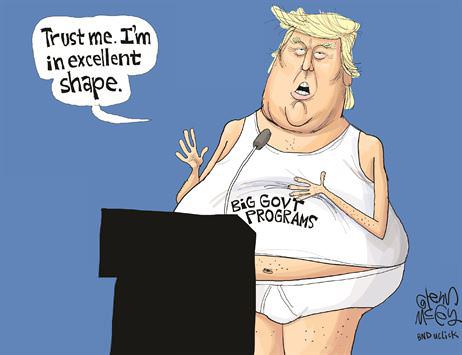 A few programs are targeted for cuts, to be sure, but I explained last week, that “taxpayers won’t reap the benefits since those savings will be spent elsewhere, mostly for a bigger Pentagon budget.” More worrisome, I also pointed out that his budget proposal is “silent on the very important issues of tax reform and entitlement reform.”

All things considered, you would think that statists, special interest groups, and other denizens of the D.C. swamp would be happy with Trump’s timid budget.

Not exactly. There’s so much wailing and screaming about “savage” and “draconian” budget cuts, you would think the ghost of Ronald Reagan is haunting Washington.

Much of this whining is kabuki theater and political posturing as various beneficiaries (including the bureaucrats, lobbyists, contractors, and other insiders) make lots of noise as part of their never-ending campaigns to get ever-larger slices of the budget pie.

And nothing demonstrates the vapidity of this process more than the imbroglio over the Meals on Wheels program. Based on news reports, the immediate assumption is that Trump’s budget is going to starve needy seniors by ending delivery of meals.

Here’s how CNN characterized the proposal.

The preliminary outline for President Donald Trump’s 2018 budget could slash some funding for a program that provides meals for older, impoverished Americans.

And a flack for Meals on Wheels added her two cents, painting a picture of doom and despair for hungry seniors.

…spokeswoman Jenny Bertolette said, “It is difficult to imagine a scenario in which they will not be significantly and negatively impacted if the President’s budget were enacted.”

Oh no, “significantly and negatively impacted” sounds brutal. How many tens of thousands of seniors will starve?

Only near the bottom of the story do we learn that this is all nonsense. All that Trump proposed, as part of his plan to shift some spending from the domestic budget to the defense budget, is to shut down a pork-riddled and scandal-plagued program at the Department of Housing Development. However, because a tiny fraction of community development block grants get used for Meals on Wheels, interest groups and leftist journalists decided to concoct a story about hungry old people.

In reality, the national office (appropriately) gets almost all its money from private donations and almost all the subsidies to the local branches are from a separate program.

About 3% of the budget for Meals on Wheels’ national office comes from government grants (84% comes from individual contributions and grants from corporations and foundations)… The Older Americans Act, as a function of the US Department of Health and Human Services, …covers 35% of the costs for the visits, safety checks and meals that the local agencies dole out to 2.4 million senior citizens, Bertolette said.

In other words, CNN engaged in what is now known as fake news, publishing a story designed to advance an agenda rather than to inform readers.

The story that Trump’s budget would kill the Meals on Wheels program was too good to check. But it was false. …it wouldn’t have taken long for reporters to find and provide some needed context to the relationship between federal block grant programs, specifically Community Development Block Grants (CDBG), and the popular Meals on Wheels program. …From Thursday’s conversation in the press, it was easy to assume that block grant programs — CDBG and similar block grants for community services and social services — are the main source of federal funding for Meals on Wheels. Not so.

And if you want some accurate journalism, the editorial page of Investor’s Business Daily has a superb explanation.

What Trump’s budget does propose is cutting is the corruption-prone Community Development Block Grant program, run out of Housing and Urban Development. Some, but not all, state and local governments use a tiny portion of that grant money, at their own discretion, to “augment funding for Meals on Wheels,” according to the statement. …So what’s really going on? As Meals on Wheels America explained, some Community Development Block Grant money does end up going to some of the local Meals on Wheels programs. But it’s a small amount. HUD’s own website shows that just 1% of CDBG grant money goes to the broad category of “senior services.” And 0.17% goes to “food banks.” …All of this information was easily available to anyone reporting on this story, or anyone commenting on it, which would have prevented the false claims about the Meals on Wheels program from spreading in the first place. But why bother reporting facts when you can make up a story…?

…this fake budget-cutting story ended up revealing how programs like Meals on Wheels can survive without federal help. As soon as the story started to spread, donations began pouring into Meals on Wheels. In two days, the charity got more than $100,000 in donations — 50 times more than they’d normally receive. Clearly, individuals are ready, willing and eager to support this program once they perceive a need. Isn’t this how charity is supposed to work, with people donating their own time, money and resources to causes they feel are important, rather than sitting back and expecting the federal government to do it for them?

At the risk of being flippant, Libertarian Jesus would approve that message.

But to be more serious, IBD raises an important point that deserves some attention. Some Republicans think the appropriate response to CNN‘s demagoguery is to point out that Meals on Wheels gets the overwhelming share of its federal subsidies from the Older Americans Act rather than CDBG.

In reality, the correct lesson is that the federal government shouldn’t be subsidizing Meals on Wheels. Or any redistribution program that purports to help people on the state and local level.

But there’s also a common-sense argument against federal involvement. And that gives me an excuse to introduce my Third Theorem of Government. Simply stated, it’s a recipe for waste to launder money through Washington. 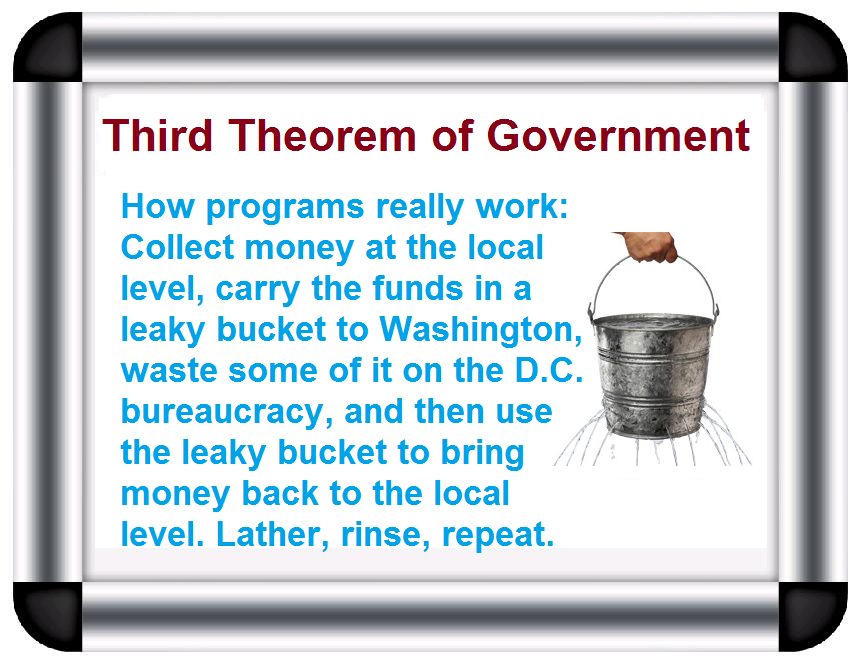 P.P.S. I started today’s column by noting that Trump hasn’t proposed “even one penny” of lower spending. That’s disappointing, of course, but the news is not all bad. The President has  endorsed the Obamacare reform legislation in the House of Representatives, and while that legislation does not solve the real problem in our nation’s health sector, at least it does lower the burden of taxes and spending.