What exactly did Liberty and Equality mean for the men who declared their independence on July 4, 1776? 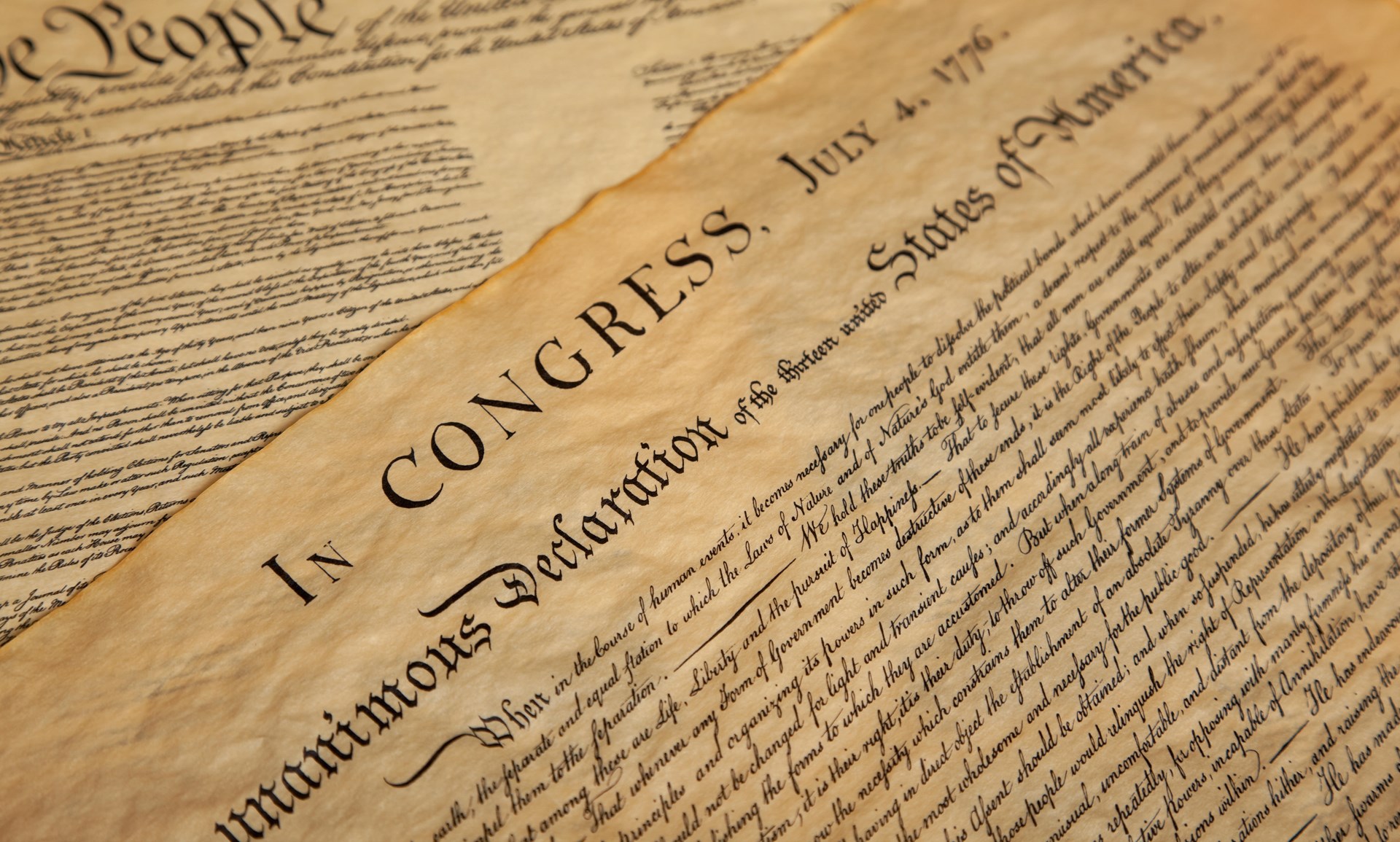 We hold these truths to be self-evident; that all men are created equal; that they are endowed . . . with certain unalienable rights; that among these are Life, Liberty and the Pursuit of Happiness;"

As familiar as these words are, their full meaning has eluded even the most astute political commentators. What exactly did Liberty and Equality mean for the men who declared their independence on July 4, 1776? And what did that understanding signify for the limits of lawful political power, as such?

To answer those pivotal questions, one must read between the lines of Jefferson's immortal Declaration. And Locke holds the key.[1] Conjuring up an imaginary state of nature, but really talking about the nature of man, as such, Locke describes this equality:

The state of nature has a law of nature to govern it, and reason which is that law teaches all mankind who will but consult it that being all equal and independent no one ought to harm another in his life, health, liberty or possessions  . . . . [For] there is nothing more evident than that creatures of the same species and rank, promiscuously born to the same advantages of nature and use of the same faculties should be equal one amongst another, without subordination or subjection . . . ."[2]

The Right to Liberty signifies a full allowance for self-directed action in pursuit of one's personally chosen goals and values. It surely embraced the full complement of economic freedoms - i.e the Right to gain, keep, use, trade or otherwise dispose of the possessions one freely acquired. If so much of a man's liberty is consumed in labor, and the fruit of one's labor is one's property, than any act that transfers the just fruits of one man's labor to another or restricts this man's freedom of action for the sake of benefiting that man's fortunes is no law.

The Right to Liberty signifies a full allowance for self-directed action in pursuit of one's personally chosen goals and values.

Now, Locke and Jefferson were no arm-chair utopians. They knew it only takes a few rotten, unrepentant apples to render life precarious for the rest. So that Liberty may find shelter under an unyielding rule of law, said Jefferson, "governments are instituted among men deriving their just powers from the consent of the governed."[3]

The question Jefferson overlooked was this: What powers do people originally possess and so may delegate to their governing bodies? The answer would determine the precise limit of power a lawful government may exercise. The pivotal point is this: as no single person has a right to "take away, or impair the life, or what tends to the Life, Liberty, Health, Limb or Goods of another,"[4] so no society or public institution can ever acquire such a power - not a single despot and not a duly-constituted legislative majority. Locke is clear as crystal on the point:

...for no body can transfer to another more power than he has in himself; and no Body has an absolute Arbitrary Power to . . . take away the Life or Property of another . . . . [A]nd having in the State of Nature no Arbitrary Power over the Life, Liberty or Possessions of another, but only so much as the Law of Nature gives him to the preservation of himself; . . . this is all he doth, or can give up to the Commonwealth . . . so that the Legislative can have no more than this."[5]

The one Right men naturally possess and will willingly cede to government is the Right of Self-Defense, what Locke called the "Executive Power."[6]

In the absence of government, men possess the moral power (1) to prevent violations of their lives, liberties and possessions, (2) to punish offenders, and (3) to obtain restitution for inflicted injuries. To avoid the anarchy of a beastly jungle, men agree not to take the law into their own hands, but to rely on a firm rule of law to settle all disputes and right all wrongs. This turns government into a protector.

Government can exceed their morally permissible authority by switching roles from protector to provider, why is that? Because whenever Congress confers special benefits on SOME it necessarily denies equal protection under the law to ALL. From a Constitutional perspective, government can promote the "General Welfare" only insofar as it provides for the "Common Defense." Otherwise, the general welfare, aside, it merely helps some and harms others.

The origins of the American Welfare State can be traced to the second bill signed into law by the nation's first president.

From a fuller Lockean perspective, it can be said: where there is Socialist redistribution, there is a deprivation of Liberty and Property. Where there is Welfare (corporate subsidies or social entitlements), there is Socialism. Is the U. S. a working, Lockean republic? Since over 75¢ of every federal dollar Washington spends serves purely redistributive purposes, as a Protector Washington is merely moonlighting.[7]

In fact, the origins of the American Welfare State can be traced to the second bill signed into law by the nation's first president. At the behest of so many "infant" industries (soon to be "establishment" interests), the Tariff Act of 1789 was meant not just to pay the expense of government, but to "encourage [domestic]manufactures." The series of protective tariffs Congress imposed did just that, but artificially raised prices for farmers, planters, shipbuilders and seaport merchants and cost thousands of seamen their livelihoods.

How did we get from that day to this? Once the nation decided that some of its citizens had a right not to go out and get but to lobby Congress and be given, it confronted two thorny questions: who else should be given and how much should the ever-expanding gaggle of special interests get? There was only one answer: politics - the corrupt game of give-and-take. Jefferson, in opposing Hamilton's bill to charter a national bank warned:

To take a single step beyond the boundaries thus specially drawn around the powers of Congress, is to stake possession of a boundless field of power, no longer susceptible of any definition."[8]

As late as 1816 Jefferson added this:

Our legislators are not sufficiently apprized of the rightful limits of their powers; that their true office is to declare and enforce only our natural rights and duties, and to take none of them from us. No man has a natural right to commit aggression on the equal rights of another; and that is all from which the laws ought to restrain him; every man is under the natural duty of contributing to the necessities of the society; and this is all the laws should enforce on him; and no man having a natural right to be the judge between himself and another, it is his natural duty to submit to the umpirage of an impartial third. When the laws have declared and enforced all this, they have fulfilled their functions, and the idea is quite unfounded, that on entering into society we give up any natural rights."[9]

[1] For a full validation of Locke's pivotal role in the period, see Jerome Huyler, Locke in America: The Moral Philosophy of the Founding Era (Lawrence, KS: The University of Kansas Press, 1995, 2000).

[3] From the Declaration of Independence (emphasis added)

[9]  Jefferson to F. W. Gilmer (1816). Quoted in Saul K. Padover, ed., Jefferson on Democracy: The Living Thoughts of America's Architect of Freedom (New York: The New American Library, reprint of original 1939 edition). pp. 17-8.  Quoted in Huyler, Locke in America, pp.300-01. Locke upholds government's right to tax. "It is true, governments cannot be supported without great charge, and it is fit everyone who enjoys his share of the protection, should pay out of his estate his proportion for the maintenance of it. Second Treatise,  § 140.

Jerome Huyler is a former assistant professor (Seton Hall University) with a PhD. in political science, and the author of Locke in America: The Moral Philosophy of the Founding Era (University of Kansas Press 1995).