Libertarians As Seen from the “Other Side”

I think it’s good to try to see an issue from the side of one’s ideological opponent, but it’s very hard to do. Sometimes, though, I see or read something that hits me in a way that really gets through.

This time it was a clever cartoon from a left-leaning blogger. 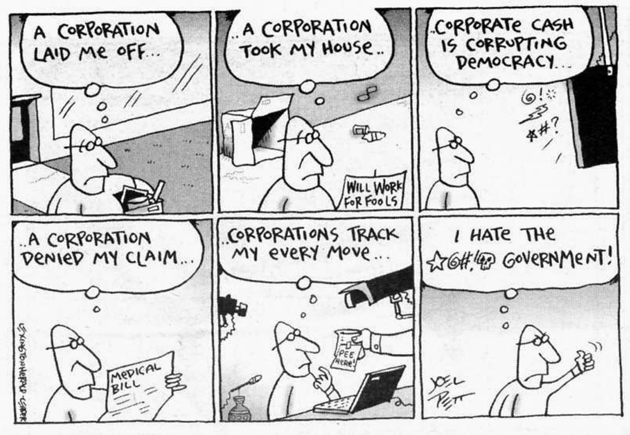 In it the following thought bubbles float above an increasingly beleaguered character:

“A corporation laid me off…

… a corporation took my house …

… a corporation is corrupting democracy …

… a corporation denied my [insurance] claim …

... corporations track my every move …

I hate the GOVERNMENT!”

Unlike a lot of blasts from the left aimed at libertarians, I found this one clever and thoughtful. I didn’t feel exasperation; it was more like getting jabbed in the ribs. Ah, I thought, here’s one reason the left finds libertarianism silly! I had to work through to get my bearings back, but I think the entire experience was worthwhile.

There are two possibilities

Despite the American law that gives a corporation the legal status of a person that can make and enforce contracts, the first thing to note is that it’s a flesh-and-blood person who lays someone off, repossesses a house, bribes government officials, etc. The question then is, “For whom is that person acting?"

It’s natural in such circumstances to try to find someone other than oneself to blame. If you’re laid off, it’s hard to blame that on the fact that your boss, if she’s doing her job right, is only conveying the wishes of consumers. The final consumer may be very far away from you in the production process, while your boss and the corporation are right there.

If the layoffs and the rest occur in a free market, then ultimately it’s the consumer who is doing the laying off. To use William H. Hutt’s famous phrase, “The consumer is sovereign,” or as Ludwig von Mises (quoted by Robert Murphy) put it, “The real boss is the consumer.” So General Motors hires or fires you, MetLife grants or denies your application, or Amazon.com tracks your spending habits because they are doing the bidding of those who ultimately pay their salaries and are the source of losses and profits: consumers.

A free market works because the rivalry among entrepreneurial competitors keeps them from charging prices that are too high, producing goods that are shoddy, or selling on terms that are unfair from the viewpoint of the consumer. If a seller charges a higher price for hiking boots that in the eyes of the consumer are of no better quality than what another seller offers, competition (on the part of profit-seeking rivals and bargain-seeking buyers) pressures her to lower the price, raise quality, or both. That could mean someone getting fired or getting hired at that company. So while it’s true that a specific person makes the immediate decision, she is only doing the bidding of consumers as a whole, who are the ultimate decision-makers.

But if you live in a system in which government habitually regulates people and redistributes wealth and income, then your woes may indeed be the fault of a specific and identifiable agent: namely, the government. Recessionary layoffs, housing crises, crony capitalism, the healthcare mess, and especially the surveillance State can more and more these days be traced to specific government interventions. (For examples and analyses you need look no further than the archives of The Freeman.) So if these unpleasant things happen to people in a mixed economy, we shouldn’t simply assume that they had it coming to them or that they have only themselves to blame.  (We ought not to assume that in a free market, either, because businesses and consumers and everyone else do make mistakes.)

The naive view of the free market

There are thus two false starting points in that cartoon. The first is to assume that the nasty experiences depicted are taking place in a free market. In a free market operating under the rule of law, people and businesses should receive no special privileges from the government. Of course, the United States economy is no pure free market.

To take but one example, General Motors has issued its 30th recall so far this year. So far it’s recalled something like 14 million vehicles for manufacturing defects, some of them quite serious. That’s more cars and trucks than it manufactured in all of 2013.

The irony of course is that GM had been initially touted as a bailout poster child. President Obama went so far as to declare, “In exchange for rescuing and retooling GM and Chrysler with taxpayer dollars, we demanded responsibility and results. In 2011, we marked the end of an important chapter as Chrysler repaid every dime and more of what it owed the American taxpayers from the investment we made under my Administration’s watch.” Then of course we learned taxpayers actually lost over $11 billion on the deal.

The other false premise ignores the concept of consumer sovereignty altogether. It is that a private company can use its wealth to trample on the rights of both consumers and its employees. Big government is necessary then to offset the “power” of big business, so big government is good.

Whenever I hear people compare the power of private wealth with the power of government coercion, I think of a line from the Netflix series House of Cards that I’ve used before. It’s in the scene where a rich businessman threatens to use his influence with the President of the United States to topple the vice president. The VP cooly responds, “You may have all the money, but I have all the men with all the guns.”

That’s ultimately what separates a big business in a free market from the government. In the free market you get wealthy by serving consumers well; under interventionism you get wealthy by accessing coercion. I often tell my students that if you put a greedy Bill Gates and all his billions in a room with some greedy guy with a 22-caliber pistol, who do you think is going leave richer?

Out of our comfort zones and back—sort of

My overall point here, however, is that each side of an issue begins with certain premises that need to be checked, both our own and those of our opponents. There are things seen and unseen by all and it’s important to try to see as much as we can. That can sometimes be uncomfortable. But find something you’re not comfortable with, then see if you can work your way logically, step by step, back to your comfort zone. If you do it right and you do make it back, it probably won’t be the same comfort zone that you left. At least, I hope it isn’t.