The Birth of Leonard Read’s “I, Pencil”

Leonard Read was a Spiritual Economist

To this day, the most influential of FEE’s publications may be Leonard Read’s “I, Pencil.” It is widely used in introductory courses in economics and social philosophy. It offers a striking way to introduce students to a market-based perspective. And yet, its origins in the mind of Leonard Read were a mystery to almost everyone — until now.

For a refresher, here’s a sliver of the classic text:

My family tree begins with what in fact is a tree, a cedar of straight grain that grows in Northern California and Oregon. Now contemplate all the saws and trucks and rope and the countless other gear used in harvesting and carting the cedar logs to the railroad siding. Think of all the persons and the numberless skills that went into their fabrication: the mining of ore, the making of steel and its refinement into saws, axes, motors; the growing of hemp and bringing it through all the stages to heavy and strong rope; the logging camps with their beds and mess halls, the cookery and the raising of all the foods. Why, untold thousands of persons had a hand in every cup of coffee the loggers drink!

The story brings out how, in a market economy, we are able to make use of socially scattered knowledge. Literally no one knows how to make as apparently simple an object as a pencil.

The story brings out how, in a market economy, we are able to make use of socially scattered knowledge.

Read sets out ideas that — once one is aware of them — seem straightforward and illuminating. The result is that it is all too easy to take his approach for granted. But no one else had put things quite that way before.

So, just how did Leonard Read come to write his essay? And what lies behind it?

In Read’s journal entry for August 29, 1958, he wrote, “Decided to try ghost writing an autobiography of a pencil — ‘I, Pencil.’ Perhaps by this device I can show what is meant by the configuration of creative human energies.”

In a later journal entry, Read includes the text of a paper of his: “On What to Do.” In the course of this paper, Read reflects on how ordinary people can enhance their creativity and reports on some of Austrian philosopher Rudolf Steiner’s ideas that he has been trying out.

Steiner prescribed several exercises but I shall present only the ones I have personally tried. These exercises cover a six-month period. If a day is missed in any month, begin the month all over again. These are designed to be habit forming, thinking disciplines; therefore laxity cancels out any possible benefits. First Month: Concentrate for not less than five minutes each day on some object of your own choosing - a blade of grass, a leaf, a rock, a pencil or whatever. Think of everything you possibly can about this object - for instance, its source, even its molecular configuration, its purpose and so on. But it should be your exploratory thinking, no one else’s. The main purpose of this exercise is to fix or identify you with reality, for any person who succeeds in a ‘break through’ is in danger of getting his ‘head in the clouds,’ whereas he should ‘keep his feet on the ground.’ Also, the exercise stretches the consciousness, remarkably.

I have completed five months of the excellent exercises. Now comes the sixth month, a recapitulation, six days of each. Out of it all comes numerous ideas and disciplines, including “I, Pencil” – the most original and most unanimously accepted piece I have done.

In the current Wikipedia discussion of “Rudolf Steiner’s exercises for spiritual development,” an account of “supplementary exercises” includes the following:

Steiner suggested that a special group of general exercises should accompany all spiritual training as he believed their influence on inner development would be beneficial whatever the spiritual path. [The first of these six exercises is]:

In the case of “I, Pencil,” Read’s meditations were only one aspect of the story.

Read met with a representative of the Lead Pencil Manufacturers Association (September 2, 1958), who arranged for him to visit a pencil factory: the Eberhard Faber Company in Wilkes-Barre, Pennsylvania.

Read comments in his journal entry for September 17:

To new $4 million plant of Eberhard Faber Pencil Company and to office of Louis M. Brown, President. Ag and I spent two hours going through plant with a Mr. Vanderrest. Afterward, we spent a good spell with Schlerer, the company research head and chemist. We lunched with Mr. Brown, had a session with Mr. Strickler and another, after which Mr. Brown had us driven to the airport. In any event, I collected an abundance of material and facts for my proposed “I, Pencil.” Let no one think a common pencil a simple thing!

Indeed, from the initial written version of “I, Pencil,” the pencil was identified as a specific product of this branch of the Faber company: the Mongol 482.

Read’s procedure was frequently to test his ideas in presentations to businesspeople, and he did this with “I, Pencil.” Read reports in his journal entry of September 28 on a seminar at Brown County State Park in Indiana: “I did most of forenoon’s session … on method, using the need for faith in free men, employing my pencil idea to explain it.”

Read then notes that he worked sporadically on a written version of the piece, completing a first draft on October 3, which is included in his journal. Read sent it to the president of Eberhard Faber to get criticism and technical feedback. Read reports in his journal:

October 9. Phoned Mr. Brown’s secretary (Eberhard Faber) about Pencil piece. The reports [are] “very clever” and they appear to like it. Will send corrections on technical detail today. 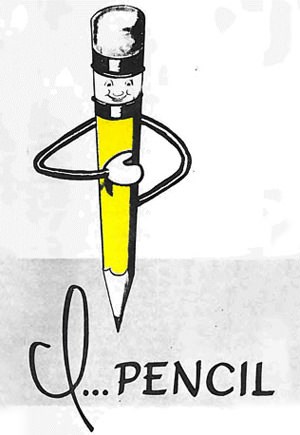 “I, Pencil” first appeared in print in the December 1958 edition of the Freeman. It is striking that it was not accorded a prominent place in the journal. Jasper Crane, a member of FEE’s board of trustees and an important fundraiser for the foundation, did not like it. Still, FEE published “I, Pencil” as a pamphlet. It was illustrated with stylized line drawings of a pencil engaged in various activities involved in its manufacture.

Eberhard Faber seems to have been delighted with Read’s essay. On December 17, 1958, the company ordered 500 copies.

“I, Pencil” has subsequently been reprinted, and the most recent edition is available from FEE’s website.

The God of Prices

In his Free To Choose, Milton Friedman summarizes the story of “I, Pencil,” and poses the question, “How did it happen?” Friedman then discusses the non-zero-sum character of voluntary exchange, the price system, and the transmission of information via prices.

Literally no one knows how to make as apparently simple an object as a pencil.

By contrast, the conclusion of Read’s essay, while referring to freedom and the invisible hand, is not obviously economic in its character:

The lesson I have to teach is this: Leave all creative energies uninhibited. Merely organize society to act in harmony with this lesson. Let society’s legal apparatus remove all obstacles the best it can. Permit these creative know­hows freely to flow. Have faith that free men will respond to the Invisible Hand. This faith will be confirmed. I, Pencil, seemingly simple though I am, offer the miracle of my creation as testimony that this is a practical faith, as practical as the sun, the rain, a cedar tree, the good earth.

Read was clearly captivated by the pencil motif. He started using an outline figure of a pencil in 1959 on the envelopes used to distribute issues of the Freeman. In the March 1959 edition, FEE announced that the pencil had joined the staff. As the pencil himself put it,

If I, an ordinary wooden pencil with all my limitations, can aid the cause of liberty, just think what countless human beings might do! MY ASSIGNMENT: No one can become really skilled at explaining the miracles wrought by men when free without constant practice — regular exercises in free market, private property, limited government thinking, writing, speaking, and reading. So, I asked myself the question, “How can I inspire more of such reading?”

This led to a practical answer: In my humble opinion, The Freeman is a first-rate study journal. While consistently libertarian, it hasn’t been getting the reading a lot of folks have intended to give it. They’ve been “too busy.” Then the thought struck me of presenting myself on The Freeman envelopes, announcing each month some unusually interesting item.

Today, Leonard Read’s pencil is still very much alive.  The fact that its roots were as much religious as economic may be interesting for readers new and old.

Jeremy Shearmur is an emeritus fellow at Australian National University’s school of philosophy.