Leftists Understand Economics When it Suits Them

Taxes impact incentives. Nanny staters understand this when they want to.

What’s the right way to define good tax policy? There are several possible answers to that question, including the all-important observation that the goal should be to only collect the amount of revenue needed to finance the legitimate functions of government and not one penny above that amount.

But what if we want a more targeted definition? A simple principle to shape our understanding of tax policy?

I’m partial to what I wrote last year.

…the essential insight of supply-side economics…when you tax something, you get less of it.

I’m not claiming this is my idea, by the way. It’s been around for a long time.

Indeed, it’s rumored that Reagan shared a version of this wisdom.

I don’t know if the Gipper actually said those exact words, but his grasp of tax policy was very impressive. And the changes he made led to very good results, even if folks on the left still refuse to believe the IRS data showing that Reagan’s lower tax rates on the rich generated more revenue.

In any event, our friends on the nanny-state left actually understand this principle when it suits their purposes. They propose sugar taxes, soda taxes, carbon taxes, housing taxes, tanning taxes, tobacco taxes, and even “adult entertainment” taxes with the explicit goal of using the tax code to reduce the consumption of things they don’t like.

I don’t like the idea of government trying to dictate what people do with their own money, but these so-called sin taxes generally are successful because supply-siders are right about taxes impacting incentives.

But that doesn’t mean it’s always popular when statist governments impose such policies. At least not in Belarus, according to a story from RFERL.

Protests over a new tax aimed at reducing social welfare spread beyond the Belarusian capital, as thousands took to the streets in Homel and other towns. Along with similar protests two days earlier in Minsk, the February 19 demonstrations were some of the largest in the country in years. In Homel, near the border with Russia, at least 1,000 people marched and chanted slogans against the measure, known as the “Law Against Social Parasites.”

But what are “social parasites” and what does the law do?

…the law…requires people who were employed fewer than 183 days in a calendar year to pay a tax of about $200. …The measure is aimed at combating what President Alyaksandr Lukashenka has called “social parasitism.”

For what it’s worth, the Washington Post reports that the government had to back down.

The protesters won. On Thursday, Lukashenko announced that he won’t enforce the measure this year, though he’s not scrapping it. “We will not collect this money for 2016 from those who were meant to pay it,” he told the state news agency Belta. Those who have already paid will get a rebate if they get a job this year. The law, signed into effect in 2015, is reminiscent of Soviet-era crackdowns against the jobless, who undermined the state’s portrayal of a “workers’ paradise.”

If people can somehow survive without working (assuming they’re not mooching off taxpayers, which is something that should be discouraged), more power to them. It’s not the life I would want, but it’s not the role of government to tax them if they don’t work. Or if they simply choose to work 182 days per year.

Mr. Lukashenko should concentrate instead on taking the heavy foot of government off the neck of his people. According to the most-recent Index of Economic Freedom, Belarus is only ranked #104, with especially weak scores for “rule of law” and “open markets.” 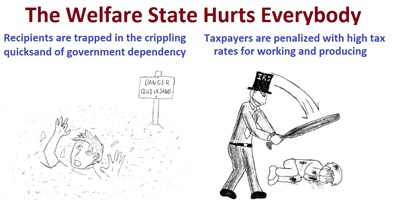 Given the low freedom ranking for Belarus, I suspect the real parasites in that country (just like in the U.S.) are the various interest groups that are feeding from the government trough.

If Mr. Lukashenko turned his country into a Slavic version of Hong Kong with free markets and small government, people will be clamoring to work. But I’m not holding my breath expecting that to happen.

P.S. While government shouldn’t tax people for not working, it’s also a bad idea to subsidize them for not working. Indeed, there’s even a version of the Laffer Curve for poverty and redistribution.

P.P.S. On an amusing note, here’s the satirical British video on killing the poor instead of taxing them.