Keynesianism Is the Real Trickle-Down Economics

Keynesians advocate stimulus programs believing that the spent money will gradually "trickle" through society. This is much closer to the caricature of "trickle-down economics" they always talk about. 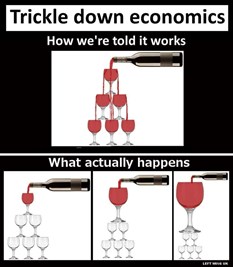 My buddy from grad school, Steve Horwitz, has a column for FEE that looks at the argument over “trickle-down economics.” As he points out (and as captured by the semi-clever nearby image), this is mostly a term used by leftists to imply that supporters of economic liberty want tax cuts for the “rich” based on a theory that some of those tax cuts eventually will trickle down to the less fortunate.

People who argue for tax cuts, less government spending, and more freedom for people to produce and trade what they think is valuable are often accused of supporting something called “trickle-down economics.” It’s hard to pin down exactly what that term means, but it seems to be something like the following: “those free market folks believe that if you give tax cuts or subsidies to rich people, the wealth they acquire will (somehow) ‘trickle down’ to the poor.”

But Steve points out that no economist actually uses this argument.

The problem with this term is that, as far as I know, no economist has ever used that term to describe their own views. …There’s no economic argument that claims that policies that themselves only benefit the wealthy directly will somehow “trickle down” to the poor.

So why, then, do leftists characterize tax cuts as “trickle-down economics” when no actual advocate uses that term or that argument?

In reality, of course, proponents of lower tax rates are motivated by a desire to improve incentives for people to earn additional income with more work, more saving, and more investment. That’s the basic insight of supply-side economics. It has nothing to do with how they spend (or don’t spend) their income.

With that out of the way, I want to address the part of Steve’s column where he suggested that policies which benefit one group are never helpful to other groups. 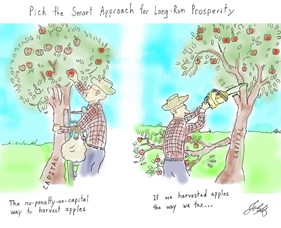 I don’t think that’s worded very well. If we lower the capital gains tax on people making more than $10 million annually, that is a policy that obviously benefits only the rich, at least when looking at direct or first-order effects.

But the impact of less double taxation should boost economic performance, even if only by a modest amount, and that will benefit everyone in society.

By the way, this works both ways. If we do something that is particularly beneficial for the poor, such as cutting back on occupational licensing requirements, that presumably doesn’t generate any direct benefit for rich people. But they will gain (as will middle-class people) as the economy becomes more productive and efficient.

Steve understands this. He closes his column by making a very similar argument about the economy-wide benefits of more economic liberty.

…allowing everyone to pursue all the opportunities they can in the marketplace, with the minimal level of taxation and regulation, will create generalized prosperity. The value of cutting taxes is not just cutting them for higher income groups, but for everyone. Letting everyone keep more of the value they create through exchange means that everyone has more incentive to create such value in the first place, whether it’s through the ownership of capital or finding new uses for one’s labor.

Now that we’ve dispensed with the silly left-wing caricature of trickle-down economics, let’s discuss how there actually is a sensible way to think about the issue.

Way back in 1996, I gave a speech in Sweden about the impact of fiscal policy on economic growth (later reprinted as a Heritage Foundation publication). 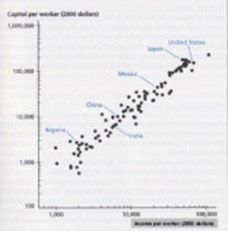 As part of my comments, I spoke about the damaging impact of the tax code’s bias against saving and investment and explained that this lowered wages because of the link between the capital stock (machinery, technology, etc) and employee compensation.

I also quoted John Shoven, a professor at Stanford University who wrote a paper back in 1990 about this topic for the American Council for Capital Formation. And here we actually have an example of an economist using “trickle-down economics” in the proper sense.

The mechanism of raising real wages by stimulating investment is sometimes derisively referred to as “trickle-down” economics. But regardless of the label used, no one doubts that the primary mechanism for raising the return to work is providing each worker with better and more numerous tools. One can wonder about the length of time it takes for such a policy of increasing saving and investments to have a pronounced effect on wages, but I know of no one who doubts the correctness of the underlying mechanism. In fact, most economists would state the only way to increase real wages in the long run is through extra investments per worker.

Amen. Capital and labor are complementary goods, which means that more of one helps make the other more valuable.