And lack of it is making it poor.

If you’re reading this, you are a very lucky person because you were born at the right time. If you were born 500 years ago, 1,000 years ago, or 1,500 years ago, the odds are overwhelming that you would have endured a very short and difficult life, one that was characterized by unimaginable poverty.

But then, as explained in short videos by Professors Deirdre McCloskey and Don Boudreaux, the world suddenly became much richer starting a few hundred years ago. 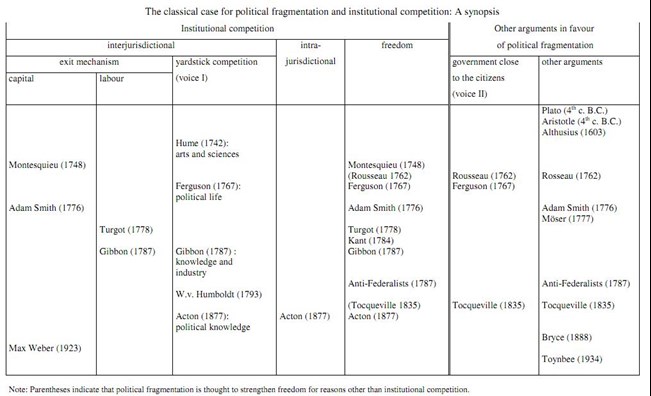 And Western Europe led the way. But why?

In 2012, I shared lots of academic research showing how jurisdictional competition enabled rising levels of prosperity in Europe. And I then augmented that research a few years later by highlighting two very important developments in 1356 that helped set the stage for that competition.

Today, let’s expand on that evidence by looking at some recent analysis.

Here are some excerpts from a fascinating Aeon article by Professor Joel Mokyr.

How and why did the modern world and its unprecedented prosperity begin? …One of the oldest and most persuasive explanations is the long political fragmentation of Europe. …The modern European economic miracle was…neither designed nor planned.…How did this work? In brief, Europe’s political fragmentation spurred productive competition. It meant that European rulers found themselves competing for the best and most productive intellectuals and artisans. …the existence of multiple competing states encouraged scientific and technological innovation. …the rivalries between the states, and their examples to one another, also meliorated some of the worst possibilities of political authoritarianism. …interstate competition was a powerful economic mover. More important, perhaps, the ‘states system’ constrained the ability of political and religious authorities to control intellectual innovation.

Mokyr then explains that the benefits of jurisdictional competition were augmented and enabled by a form of labor mobility.

…political fragmentation was not enough. …more was needed. The size of the ‘market’ that intellectual and technological innovators faced was one element of scientific and technological development that has not perhaps received as much attention as it should. …political and religious fragmentation did not mean small audiences for intellectual innovators. Political fragmentation existed alongside a remarkable intellectual and cultural unity. Europe offered a more or less integrated market for ideas, a continent-wide network of learned men and women, in which new ideas were distributed and circulated. …In early modern Europe, national boundaries mattered little in the thin but lively and mobile community of intellectuals in Europe. Despite slow and uncomfortable travel, many of Europe’s leading intellectuals moved back and forth between states. …If Europe’s intellectuals moved with unprecedented frequency and ease, their ideas travelled even faster. …Europe’s unique combination of political fragmentation and its pan-European institutions of learning brought dramatic intellectual changes in the way new ideas circulated. …Europe’s intellectual community enjoyed the best of two worlds, both the advantages of an integrated transnational academic community and a com­petitive states system.

By the way, I don’t consider this the “best of two worlds.” Labor mobility is a feature of jurisdictional competition, so I would say it’s simply one of the benefits. But six of one, half-dozen of the other.

Let’s now look at another benefit of capitalism. Here are some passages from a CapX column on how the development of a merchant class constrained militarism. Here’s the thesis.

Although a number of things contributed to the huge decline in violence of the late medieval period, …the development of capitalism, and the rise of a merchant class whose wealth was not won with a sword, played a huge part.

And here’s an example.

This order was first shaken in 1302 when France’s cavalry confidently marched north to suppress a revolt by the Flemish. Flanders is not naturally rich in resources—Vlaanderen means flooded—but its people had turned swamps into sheep pastures and towns, building a cloth industry that made it the wealthiest part of Europe, its GDP per capita 20 percent greater than France and 25 percent better than England. …The Flemish were traders, not knights, which is why the French were sure of victory. And yet, with enough money to pay for a large, well-drilled infantry they were able for the first time to destroy the cavalry at the Battle of the Golden Spurs. It was the beginning of the end—no longer could the aristocracy simply push around the bourgeoisie, and as the latter grew in strength so it undermined the violence-obsessed culture of the nobility.

European capitalism had begun in northern Italy, chiefly Venice, one of nine Italian cities that had surpassed 50,000 people by this point. …Venice was high in trust, a vital component for the growth of sophisticated markets, and so was the first to develop joint-stock companies and banks. …The Venetians, along with their arch-rivals the Genoese and Pisans, had been involved in the crusades, but despite papal prohibition had continued to trade with the infidel. Indeed, nothing would stop their desire to engage in commerce, and Arab geographer and traveller Ibn Jubayr noted that “It is amazing to see that the fires of discord burn” between Christians and Muslims when it comes to politics but, when trading, travellers “come and go without interference”.

And another case study.

London was behind Italy or Flanders but it was catching up. The city had started to grow as a trading hub in the 12th century, and its mayor, William Hardel, was the only commoner to witness Magna Carta in 1215 and helped secure Clause 41, which stated that all foreign “merchants are to be safe and secure in departing from and coming to England” without “evil exactions”. London expanded rapidly in the later middle ages, increasing its share of England’s wealth from two to nine per cent, and Henry IV (1399-1413) was the first king to invite his merchants on to the royal council, among them Sir Richard Whittington…the merchants purposefully avoided conflict, so that when in the 1380s Richard II tried to raise an army in the city to fight his various internal enemies he was met with apathy.

What makes this analysis especially important is that military conflict is one of the putative downsides of political fragmentation. Indeed, Mokyr mentions that in his article.

I confess I don’t know enough to judge that issue. For instance, I’d like to know if there were more wars in Europe, or were European wars between countries as opposed to an equal amount of civil wars elsewhere in the world?

In any event, at least there is some evidence that the prosperity generated by capitalism produced resistance to militarism. Sort of brings to mind Bastiat’s famous statement about trade and war.

(Something to keep in mind given Trump’s self-destructive protectionist impulses.)

Let’s close by looking at Europe today and exploring jurisdictional competition on the continent. The good news is that the principle of “mutual recognition” has produced a form of competitive federalism, as explained in an article by Professor Michael Greve.

…the principle of reciprocity and “mutual recognition”…allows decentralized political institutions to coexist with a common, open, and efficient economic market. …cross-border trade…must be governed either by the rules of the country where a particular good or service ends up or by the rules of its origin country. The former “destination” principle would compel each company to comply with different and often conflicting regulations in all the member states where its products might end up. The result is not a common market but a collection of regulatory fiefdoms. The solution to this dilemma is the opposite, origin-based rule: so long as a company in a member state complies with the laws of its home state, it may freely sell its goods and services in other member states. …the origin principle…is commonly called the principle of “mutual recognition.” …it is the only principle that is consistent with both a common economic market and political decentralization. Mutual recognition integrates member states without central intervention. …Mutual recognition, then, liberates commerce by eliminating the cost of complying with different, conflicting, and often incomprehensible rules. Beyond that, mutual recognition institutionalizes jurisdictional competition. …The ability of individuals and firms to vote with their feet, modems, and pocketbooks will liberate markets and discipline politicians. …Trade unions, environmental interests, and any other interest group whose agenda rests on redistribution consistently oppose mutual recognition: they cannot rob Peter to pay Paul if Peter is allowed to escape to more hospitable climes.

Incidentally, the “origin principle” is at the core of the battle over the so-called Streamlined Sales Tax Proposal, a scheme by certain state governments to impose destination-based tax laws on out-of-state merchants.

And that principle also was a big reason for my fight against the border-adjustment tax, which was a destination-based levy.

For what it’s worth, Europe generally has been better than the United States about using the origin-based approach.

Europeans [are] ahead of the United States in viewing mutual recognition as an efficient means of harmonizing, as it were, the demands of economic integration and political diversity. Here at home, mutual recognition governs corporate chartering—but almost nothing else. Tort law, insurance and financial regulation, state taxation, product labeling, and most other areas of regulation are either subject to a destination rule or else preempted under federal law. No American legislator or corporate executive has ever heard of mutual recognition, let alone pressed it as a serious policy option.

Insurance regulation is a key example. Many states impose costly mandates that drive up the cost of health insurance. But if consumers had the freedom to buy health insurance from companies based in more market-oriented states, they would be able to save money.

Unfortunately, statists in Europe are moving in the wrong direction, seeking to replace mutual recognition with one-size-fits-all harmonization.

The European political class is bent on establishing pan-European, sovereign political institutions. …As political aspirations begin to dominate the process of European integration, mutual recognition will be jettisoned. …Habermas denounces the premises on which mutual recognition rests as the “building blocks of a neoliberal world view,” and he declares them at odds with “the Europeans’ normative self-understanding.” The European Union must therefore construct a European society of citizens, a pan-European “public sphere,” and a shared European political culture…precisely to confine economic competition and choice to a subordinate sphere. …the Europeans will harmonize their way toward a common constitution and citizenship, with dental care for all.

If the centralizers in Europe succeed (and they’ve already moved policy in the wrong direction), that will not bode well. 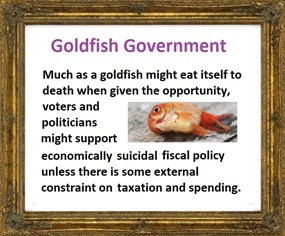 Harmonization will exacerbate the problem of too much government because the “stationary bandit” no longer will face competitive pressure.

So “goldfish government” will become one step closer to reality.

P.S. This helps to explain my support for Brexit.

P.P.S. Speaking of Brexit, here’s a UKIP member of the European Parliament expounding on the benefits of mutual recognition over harmonization.