One and a half cheers for the lame-duck speaker

John Boehner announced Friday that he will resign as Speaker of the House, after nearly five years in charge, and retire from Congress in October. During his tenure, he faced relentless criticism from conservative groups, but he managed to maintain control of the speakership against multiple revolts from within the House GOP.

Now, as another government shutdown looms, he seems to have had enough. On his way to the podium to announce his resignation, he sang, "Zip-a-dee-doo-dah, zip-a-dee-ay! My, oh my, what a wonderful day!"

It's a sentiment shared by his political rivals, from a gleeful Nancy Pelosi to the conservative wing of his own party.

Conservative and Tea Party groups have for years hammered the Ohio Republican for failing to cut spending more aggressively and for showing weakness in battling the Obama administration.

But the reality is that Boehner — for all of his many, glaring faults — has been the most fiscally conservative (and effective) Republican leader in recent history.*

As minority leader, he managed to lead a fairly effective opposition to the 2009 health care reform, forcing Democrats and the president to abandon many of the worst parts of their proposals.

He also managed to derail the president's budget proposal for the fiscal year 2011 (fiscal years run from October of the prior year through September), forcing a series of "continuing resolutions" to fund the government a bit at a time — each one an opportunity to force the Obama administration to negotiate.

When Republicans took over in 2011, Boehner fought the administration to a standstill, forcing President Obama to sign the Budget Control Act into law, putting caps on federal spending.

As a result, federal spending not only hasn't grown, it's fallen in real terms. 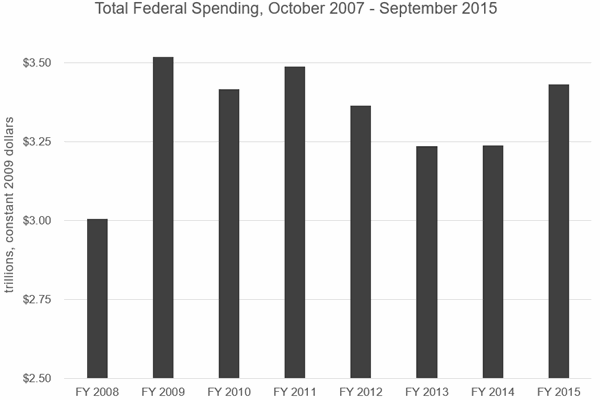 Figures from CBO via USGovernmentSpending.com.

Most of the recent jump in government spending actually came during the last budget of the Bush administration, fiscal 2009.

Bush's bank bailout, Obama's stimulus package, and the typical jump in government spending during recessions (from more unemployment and other benefits), each contributed about a third to the half trillion dollar increase.

But lest anyone try to credit President Obama for being fiscally responsible, look at the difference between what the president wanted to spend and what he actually got. 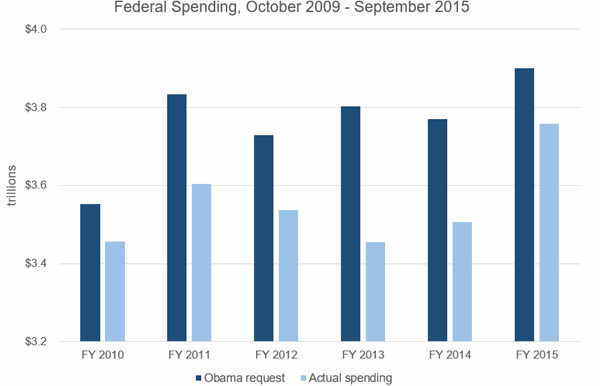 No budget was passed for the next year in 2010; about half of FY 2011 appropriations occurred after the GOP takeover in 2011. Figures are in nominal terms.

It's worth noting that many of the president's spending proposals have been so outlandish that even the Democrats voted against them — not because they didn't want to spend that much, but because the budgets were so politically impossible given the 2010 midterms and the GOP control of the House.

A back of the envelope calculation shows that the Republican Congress gave the president about a trillion dollars less than he asked for over the four-odd years that Boehner has been speaker.

President Obama has tried to make some political hay out of "meeting his goals" for reducing the deficit. But when you look at the deficits the White House asked for, you see how disingenuous this is.

In his budget requests going back to fiscal 2011, the president asked for nearly a trillion dollars more in deficit spending than he's been able to get. 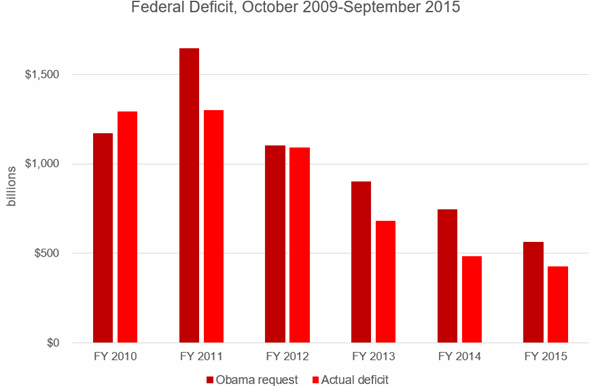 The situation here is actually worse than it looks because, even to the extent that they try to control the deficit, Obama's budgets have almost uniformly proposed higher tax revenue, not less spending — several hundred billion more in taxes, in fact.

Take the following chart of federal revenue with a grain of salt, because gross tax revenue depends as much on how the economy is doing as on what the tax rates are. But whether the disparity between the revenue Obama asked for is more due to overly optimistic economic forecasts (in which case it would have to be made up for with an even higher deficit) or to his many proposed tax hikes, it's clear the president is no fan of fiscal restraint.

And had taxes been as high the president wanted, whatever the reason, the economy would certainly have been weaker for it. 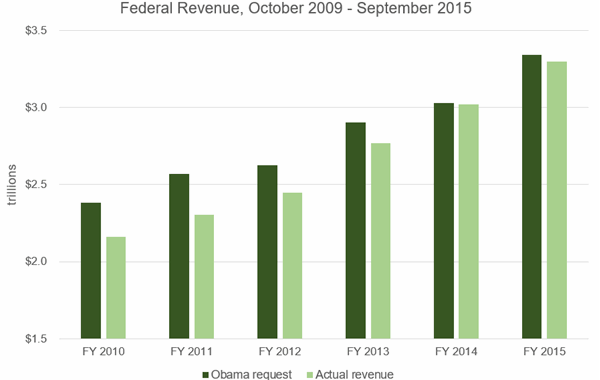 So was Boehner a pushover, a failure, a weak-negotiator? Hardly. He took the president to the wall numerous times over spending restraint (though he was against Ted Cruz's doomed attempt to shut down the government over Obamacare). What's more, he actually managed to get real spending cuts for the first time in decades.

Dylan Matthews at Vox notes that Boehner's record as a budget cutter blows Newt Gingrich and the '90s Republicans out of the water.

Boehner actually did more to reduce the size of the federal government than any other politician in recent memory.

Last year, analysts Richard Kogan and William Chen at the Center on Budget and Policy Priorities estimated that deficits over [2015-2024] would be $5 trillion lower than had been projected before Boehner became speaker.

Most of the savings — $3.2 trillion — came in the form of spending cuts enacted through the post-debt ceiling crisis Budget Control Act, spending cuts negotiated in early 2011, the Bush tax cuts deal of late 2012, the Murray-Ryan spending deal of 2013, and last year's farm bill.

Boehner had help enacting that $3.2 trillion spending reduction. But without him using the House to force President Obama and Senate Democrats to accept cutbacks, it's doubtful it would have happened.

Gingrich's biggest achievement was the Balanced Budget Act, which reduced federal spending by roughly $400 billion over five years. But a quarter of that came from reducing Medicare payments to doctors — a cut that was delayed year after year (the notorious "doc fix") until Congress just gave up on it.

By contrast, Boehner's deals with the Budget Control Act and extending (most of) the Bush tax cuts are estimated to reduce spending by four times as much per year over the next decade. The federal government and the taxpayers are now in much, much better fiscal shape than they would have been.

There are caveats worth mentioning here.

First, Boehner compromised and blew through the spending caps last year. He caved on the "cromnibus" pork spending bill. He did the typical Republican dance trying to protect the Pentagon from budget cuts (though he did compromise to get cuts to domestic spending).

Most regrettably, he and Paul Ryan failed at reforming Medicare, Medicaid, and Social Security. Of course, that was never going to happen with Obama in the White House. But entitlements are most of the problem, and they are the reason that the long-run budget situation is still bleak, despite all the recent budget control measures, which only affect discretionary spending, not "mandatory" entitlement spending.

More fundamentally, the cuts are still minuscule compared to the size of the budget. The unfortunate political reality is that Republicans and Democrats agree on 80% of spending, and the budget battles are all on the margins.

There is no real debate on what the federal government should be doing in the first place. The answer, from both sides, is apparently everything — just to greater or lesser degrees. Boehner couldn't even name a single government program he thought we could do without.

Boehner is no libertarian, nor even a principled conservative, nor even a fan of limited government. Nonetheless, for a politician, he wasn't wholly, uniformly bad.

He and his unlikely allies in the Tea Party broke up the Washington consensus for perpetually increasing spending that existed for eight years under the Bush administration. He managed to slow (and, for a time, stop) the growth of government. And that's really the most you can hope for without a major shift in public attitudes about the role of government.

* As many people have pointed out, and I make abundantly clear, this is a low bar, but former Speaker Newt Gingrich generally receives more credit for fewer concrete accomplishments.