Jerry Brown: “Economically, the Minimum Wage May Not Make Sense” 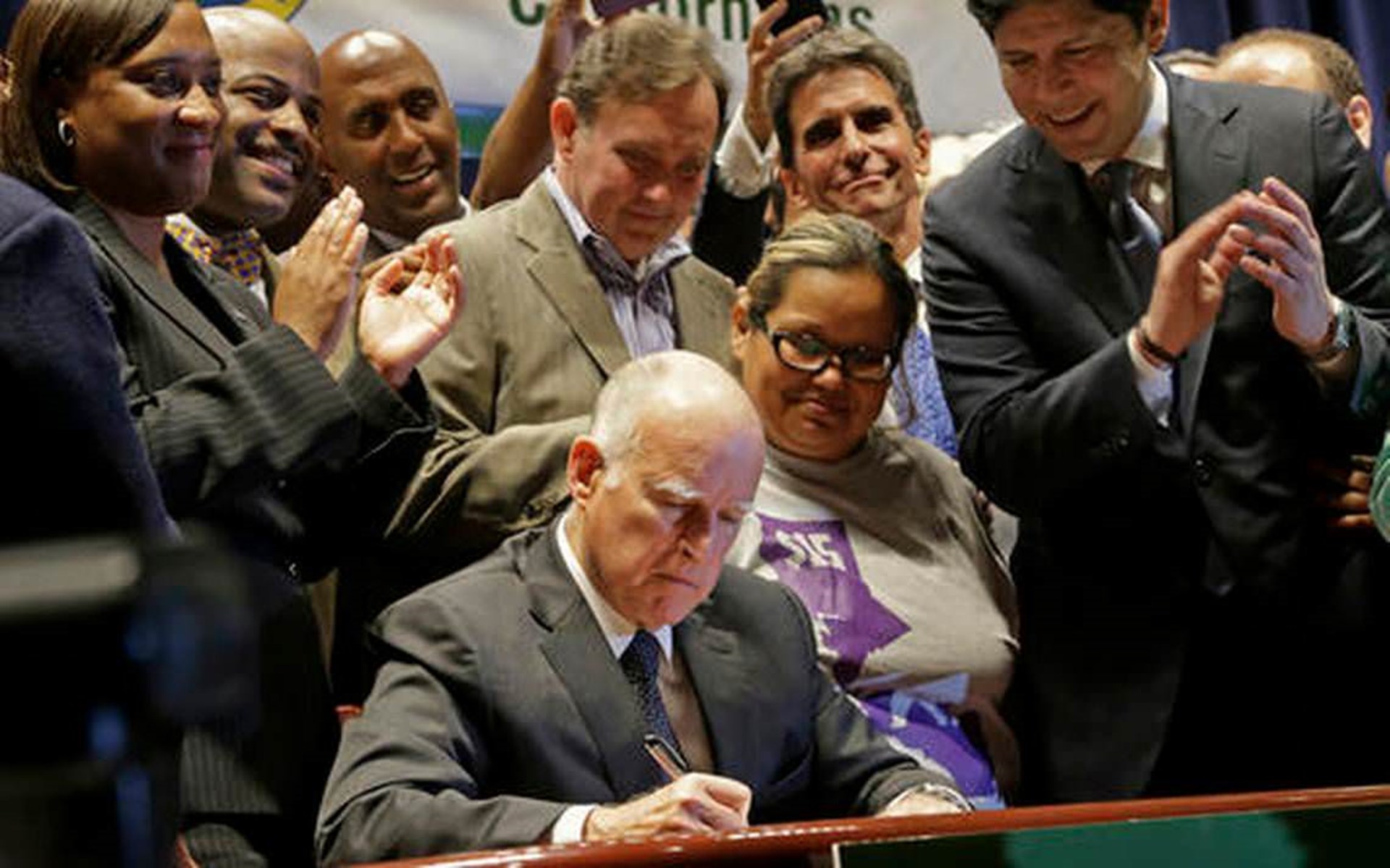 I have a certain amount of sympathy for California lawmakers. They’re held captive by political circumstance, trapped between the state’s almighty labor unions and its prodigiously ignorant electorate. If legislators refuse to do what the unions want, they’ll just bypass the elected officials by going directly to the state’s notoriously compliant, mathematically challenged voters through the ballot initiative system.

There’s an upside to the process for politicians: whenever they don’t want to be blamed for something unpopular (like tax hikes) or something that will eventually blow up in their faces (like the debt for the horrible train wreck of high-speed rail), they can pass the buck to voters.

But when they are being circumvented, there’s no chance to compromise, negotiate, balance interests, or possibly defray some of the consequences of whatever weaponized policy the unions have cooked up. If the legislature doesn't cave, the unions can set the terms of the ballot initiative unilaterally, and roll the dice on whether voters are shortsighted enough to sign off on it. It's the ultimate trump card.

This is how we get to poor Governor Moonbeam, Jerry Brown, signing a bill to raise the minimum wage to $15 an hour — a law he knows will be a catastrophe for the state’s businesses and low-skilled workers. The decision was a compromise with the unions to avoid being cut out of the process altogether, to avoid an even worse fate at the hands of California’s enthusiastically misinformed voters.

Brown, a fiscal moderate, had previously expressed reservations about a wage increase. But amid growing concern about income inequality in California and the national thrust of the labor-backed “Fight for 15” campaign, his hand was forced. Public opinion polls showed strong support for increasing the state’s mandatory minimum beyond its current $10.

The compromise Brown offered lawmakers – then celebrated with a bill-signing in Los Angeles – includes a provision allowing the governor to postpone a wage increase in the event of an economic downturn. It replaces a ballot measure that, if passed, would have raised the minimum wage to $15 by 2021, a year faster.

Brown tried to pull a 180 to take credit for the increase — he's in too deep to avoid responsibility at this point anyway — but his statement quickly degenerated to rambling nonsense.

With all the enthusiasm of a hostage praising the generosity of his captors, the governor, flanked by union reps, struggled to justify the law but ended up admitting that it made no sense.

This is an old idea, from the 19th century, from religious leaders, that work is not just an economic equation, but work is part of living in a moral community. And a worker is worthy of his or her hire. And to be worthy means they can support a family.

So, economically, minimum wages may not make sense. But morally and socially and politically, they make every sense, because it binds the community together and makes sure parents can take care of their kids in a much more satisfactory way.

So this is about economic justice. It's about people. It's about creating a little, tiny balance in a system that every day becomes more unbalanced.

What now? It doesn’t make economic sense, but you’re doing it anyway? Because workers are “worthy of their hire”? It’s creating “a tiny balance” in an “unbalanced system”? The economy is not a washing machine, Jerry.

The only truly coherent thing he said was that it may not make economic sense, but it made a lot of political sense, for him. That, in a nutshell, describes every minimum wage law. (And he might do well to study the actual origins of this old idea.)

He knew better, but it’s done now. $15 in 2022 will be nearly 70 percent of the state’s median hourly wage — a nearly unprecedented level for a wage floor. Even worse, the law indexes the minimum for inflation, so the state will never escape it.

Currently, only 15 percent of Californians without a high school degree make $15 an hour or more (for those under 30, it’s only 4 percent).

What can we predict will happen to the rest of their jobs? To low-skilled job creation? To businesses that rely on low-skilled, labor-intensive production? To young people’s job opportunities, long-term work experience, and human capital development? To less-educated immigrants?

If you think the answer is “nothing,” you are in for a surprise. But excuse me, the self-checkout line is moving again.