It's a fiscal and monetary slow motion seppuku. 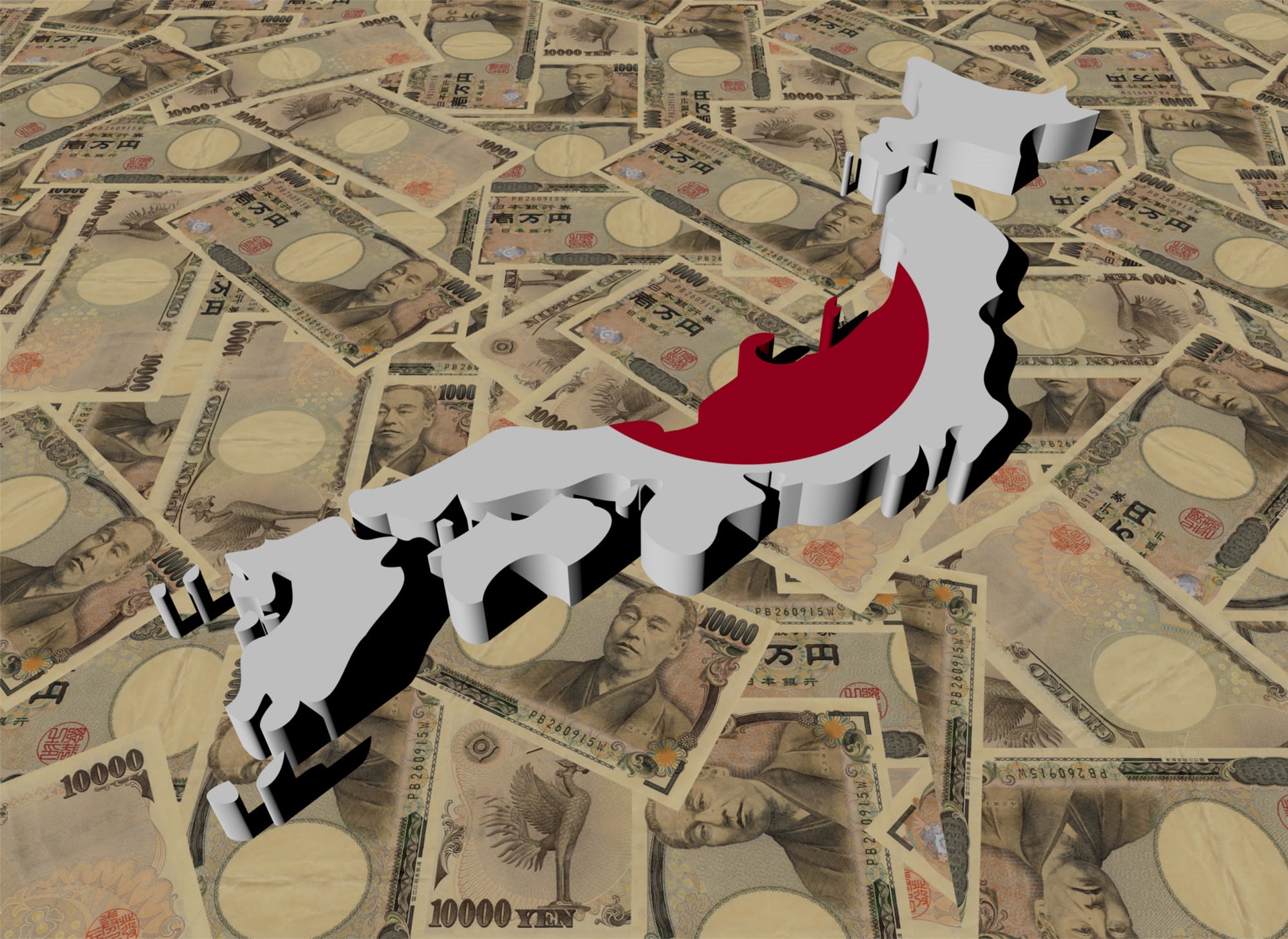 Remember Bill Murray’s Groundhog Day, the 1993 comedy classic about a weatherman who experiences the same day over and over again?

Well, the same thing is happening in Japan. But instead of a person waking up and reliving the same day,

we get politicians pursuing the same failed Keynesian stimulus policies over and over again.

The entire country has become a parody of Keynesian economics. Yet the politicians make Obama seem like a fiscal conservative by comparison. They keep doubling down on the same approach, regardless of all previous failures.

The Wall Street Journal reports on the details of the latest Keynesian binge.

Japan’s cabinet approved a government stimulus package that includes ¥7.5 trillion ($73 billion) in new spending, in the latest effort by Prime Minister Shinzo Abe to jump-start the nation’s sluggish economy. The spending program, which has a total value of ¥28 trillion over several years, represents…an attempt to breathe new life into the Japanese economy… The government will pump money into infrastructure projects… The government will provide cash handouts of ¥15,000, or about $147, each to 22 million low-income people… Other items in the package included interest-free loans for infrastructure projects…and new hotels for foreign tourists.

As already noted, this is just the latest in a long line of failed stimulus schemes. 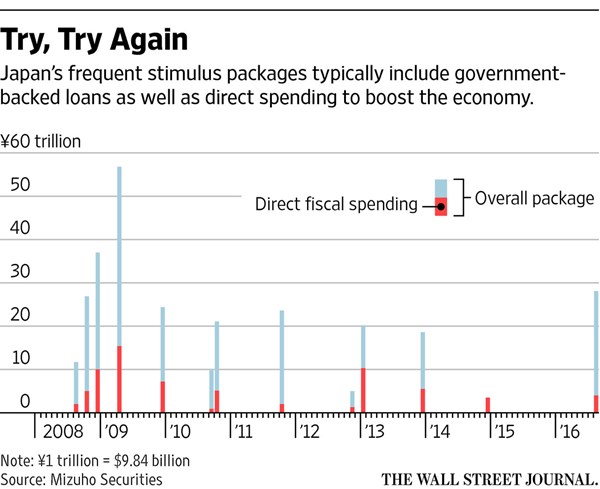 And if you go back farther in time, you’ll see that the Japanese version of Groundhog Day has been playing since the early 1990s.

Here’s a list, taken from a presentation at the IMF, of so-called stimulus plans adopted by various Japanese governments between 1992-2008. 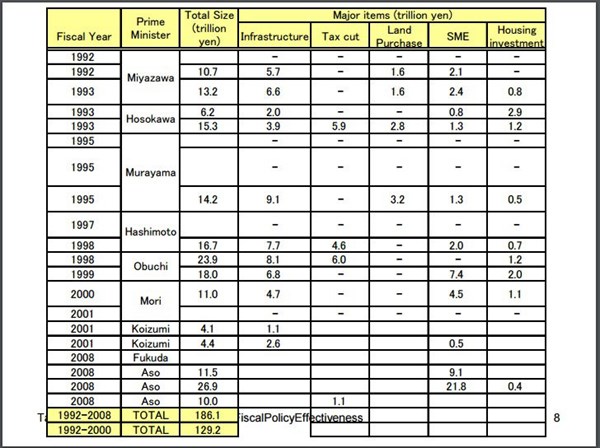 And here’s my contribution to the discussion. I went to the IMF’s World Economic Outlook database and downloaded the numbers on government borrowing, government debt, and per-capita GDP growth.

I wanted to see how much deficit spending there was and what the impact was on debt and the economy. As you can see, red ink skyrocketed while the private economy stagnated. 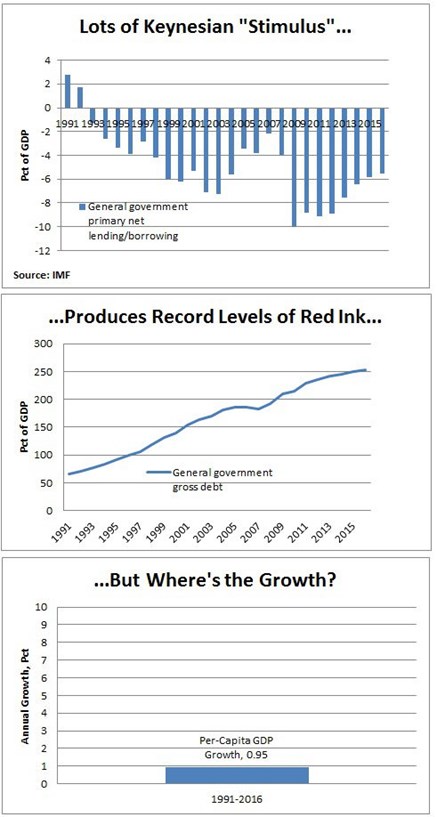 Though we shouldn’t be surprised. Keynesian economics didn’t work for Hoover and Roosevelt, or Bush and Obama, so why expect it to work in another country.

By the way, I can’t resist making a comment on this excerpt from a CNBC report on Japan’s new stimulus scheme.

In the interest of accuracy, the reporter should have replaced “despite” with “because of.”

In addition to lots of misguided Keynesian fiscal policy, there’s been a radical form of Keynesian monetary policy from the Bank of Japan.

Here are some passages from a very sobering Bloomberg report about the central bank’s burgeoning ownership of private companies.

Already a top-five owner of 81 companies in Japan’s Nikkei 225 Stock Average, the BOJ is on course to become the No. 1 shareholder in 55 of those firms by the end of next year…. BOJ Governor Haruhiko Kuroda almost doubled his annual ETF buying target last month, adding to an unprecedented campaign to revitalize Japan’s stagnant economy. …opponents say the central bank is artificially inflating equity valuations and undercutting efforts to make public companies more efficient. …the monetary authority’s outsized presence will make some shares harder to buy and sell, a phenomenon that led to convulsions in Japan’s government bond market this year. …the BOJ doesn’t acquire individual shares directly, it’s the ultimate buyer of stakes purchased through ETFs. …investors worry that BOJ purchases could give a free ride to poorly-run firms and crowd out shareholders who would otherwise push for better corporate governance.

Wow. I don’t pretend to be an expert on monetary economics, but I can’t image that there will be a happy ending to this story.

Just in case you’re not sufficiently depressed about Japan’s economic outlook, keep in mind that the nation also is entering a demographic crisis, as reported by the L.A. Times.

All across Japan, aging villages such as Hara-izumi have been quietly hollowing out for years… Japan’s population crested around 2010 with 128 million people and has since lost about 900,000 residents, last year’s census confirmed. Now, the country has begun a white-knuckle ride in which it will shed about one-third of its population — 40 million people — by 2060, experts predict. In 30 years, 39% of Japan’s population will be 65 or older.

The effects already are being felt, and this is merely the beginning of the demographic wave.

Police and firefighters are grappling with the safety hazards of a growing number of vacant buildings. Transportation authorities are discussing which roads and bus lines are worth maintaining and cutting those they can no longer justify. …Each year, the nation is shuttering 500 schools. …In Hara-izumi, …The village’s population has become so sparse that wild bears, boars and deer are roaming the streets with increasing frequency.

Needless to say (but I’ll say it anyhow), even modest-sized welfare states eventually collapse when you wind up with too few workers trying to support an ever-growing number of recipients.

Now maybe you can understand why I’ve referred to Japan as a basket case.

P.S. You hopefully won’t be surprised to learn that Japanese politicians are getting plenty of bad advice from the fiscal pyromaniacs at the IMF and OECD.

P.P.S. Maybe I’m just stereotyping, but I’ve always assumed the Japanese were sensible people, even if they have a bloated and wasteful government. But when you look at that nation’s contribution to the stupidest-regulation contest and the country’s entry in the government-incompetence contest, I wonder whether the Japanese have some as-yet-undiscovered genetic link to Greece?