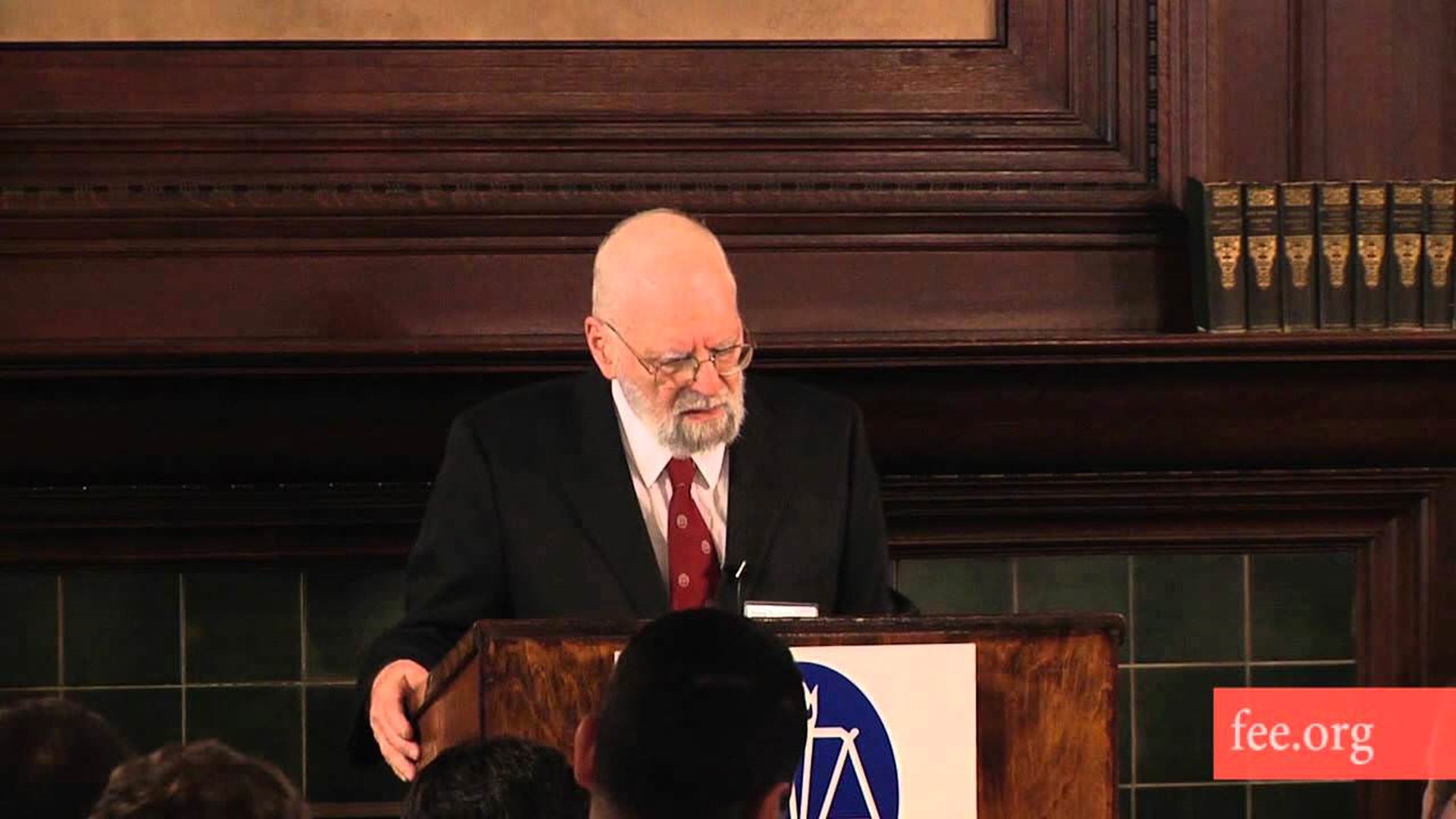 When people ask me to describe what kind of economist I want to be when I am in my 70s or 80s, I tell them a story about Israel Kirzner. For a number of years, I watched Professor Kirzner give the opening lecture at the Advanced Austrian Economics summer seminar for graduate students at the Foundation for Economic Education. The basic content of the lecture was the same each year, but each one was different in important details. You could tell that Kirzner was, to some degree, unsatisfied with his own presentation the previous year and had tinkered with it to try to make it clearer and more persuasive this time around. The fact that such a brilliant scholar was perpetually self-critical in this way, and that it mattered to him to make it better and get it right, makes him a role model for scholars of all backgrounds.

Just as important, however, was the passion he brought to that talk each year. I knew watching those lectures that he had given a version of this talk hundreds of times over the years to both his own students and audiences across the world. Yet every year, I felt like he was giving it for the first time, mostly because he spoke with such passion and urgency, as if understanding the basics of economics was a task that bore the weight of civilization on its shoulders. And, as he has argued, it in fact does. We should all aspire to the level of intellectual humility and passion that he demonstrated in those lectures.

You are in for an intellectual treat. In bringing together this collection of essays by Kirzner, the Foundation for Economic Education has given us a glimpse into that scholarship and passion. Those of us lucky to have known and interacted with Professor Kirzner will recognize in these essays two defining features of his work as a scholar: an analytical precision unmatched by his contemporaries and a passion for conveying sound economics. That passion was most obvious in hearing him lecture, but it shines through on these pages as he walks us through topics from the basics of microeconomics, to the role of the economist as a policy advisor, to the history of Austrian economics.

The opening set of essays in this collection explores the operation of the market process as seen by the Austrian school. In discussing “The Foundations of Austrian Economics,” Kirzner  distinguishes the Austrian approach from the standard textbook treatment of supply and demand. This exercise is invaluable as even mainstream economists somewhat sympathetic to the Austrian school often claim that its approach to supply and demand is really no different from the textbook version. As Kirzner points out, nothing could be further from the truth, as the Austrian approach refuses to start with the strong notions of knowledge embedded in the model of perfect competition that still dominates the textbooks.

In that model, it is assumed that everyone has perfect relevant information and therefore that markets will not deviate from the market-clearing, or equilibrium, price. Since everyone knows their preferences and constraints, any deviation from equilibrium would be recognized as such and instantaneously, or nearly so, corrected. There is in this world no genuine error, no regret, and nothing resembling learning. To the degree that the model is seen as a reflection of how actual markets operate, the only conclusion to draw is that markets are always at or near market-clearing.

Starting with Hayek’s description of the market as a process of learning, Kirzner deploys Mises’s conception of entrepreneurship as alertness to seeing opportunities hitherto unnoticed to explain how that learning takes place. It is the entrepreneurial element of human action that notices opportunities to bring the pattern of market outcomes into better alignment with human wants. In the simplest of cases, entrepreneurial insight enables an actor to see that a good is selling for two different prices such that buying low and selling high can make all parties better off. Kirzner expands on the simple arbitrage case to show how it is entrepreneurial alertness, in its refusal to take the existing means-ends framework as a given, that drives markets toward market equilibrium. In Kirzner’s view, the empirical observation that prices tend toward costs, which Hayek called the claim that makes economics “scientific,” is the result of the way in which entrepreneurship spreads knowledge and enables us to overcome our ignorance.

What Kirzner calls the “entrepreneurial market process” is also the competitive market process. As did Mises and Hayek before him, Kirzner sees competition not as a static picture of powerless market participants, but as a process that unfolds through the active entrepreneurial behavior of alert actors. The competition generated by entrepreneurship drives the innovation of the market, bringing resources into uses that better coordinate with human wants. In the essay on “Advertising,” Kirzner applies this framework to show how advertising is not a waste of resources. Instead, he argues that a product or service does not even exist in a meaningful sense unless consumers are aware of it. Even loud or unusual ads are part of the production and sale of a good as they alert us to its existence, which is even more challenging as more products and services compete for our attention. Discovering ways to get consumers to discover new products is the role played by advertising in a competitive entrepreneurial market process.

As he points out in the last of the opening essays, the Austrian view of entrepreneurship and competition has important implications for economic policy, especially antitrust. When we see markets as processes of discovery through with entrepreneurs test their judgments, we cannot make a priori judgments about the desirability of specific market behavior.

For example, a merger that creates a large firm and reduces the number of firms in an industry is a form of active, entrepreneurial competition and not evidence of competition’s absence. We cannot know ahead of time the appropriate number and size of firms. A competitive market in which barriers to entrepreneurial entry and activity are absent is the only way to discover how best to serve consumers. True monopoly happens when firms are legally barred from entering an industry or using their resources as they think appropriate to better serve their customers. This Austrian view of competition and entrepreneurship cautions us to be humble about what we think we know about markets and therefore more hesitant to interfere in the competitive process.

In the essays on the “Anatomy of Economic Advice,” Kirzner lays out an Austrian conception of the economist’s role as a policy advisor, focusing on the claim that economics is “value free.” Largely following Mises again, Kirzner sees the economist’s role as offering cause-and-effect analysis to those making policy. The question for the economist qua policy advisor is “Will the means the policymaker is adopting actually achieve the ends the policymaker claims to be seeking?” For example, will a minimum wage law actually improve the condition of workers?  Will restrictions on international trade actually enrich workers and consumers? What the Austrians call the “value freedom” of economics is the idea that we need not debate the question of whether the ends in question are desirable. The task of economics is to show what sorts of policies can or cannot achieve those ends. Describing the findings of economics is not the same thing as saying “markets are good.” Getting to the latter requires that one specify the ends trying to be achieved.

Economists might, for example, think it is better that we adopt policies that promote economic progress and increased social cooperation, but strictly speaking the truths of economics are independent of the values adopted by the economist. One can see this point at play in the Progressive Era in the United States when labor market interventions were used to promote racist ends through the use of eugenic reasoning. Those who thought minimum wage laws were desirable because they impoverished the least productive were engaged in a correct economic analysis of the effects of the laws. Economic laws operate independently of the values of the analyst. To condemn those laws as “bad,” one needs to either make a claim about value oneself, or one must know what ends those implementing the policy have set for themselves. The goals of policymakers cannot change the laws of economics, no matter how laudable or repugnant policymakers or the public might find those goals.

In the final group of essays in this collection, Professor Kirzner explores the history of the modern Austrian school and the role played by FEE and Mises’s Human Action in the school’s resurgence over the last four decades. Kirzner’s description of their important roles is accurate, but just as important to the revival of Austrian economics is Kirzner’s own work, especially his 1973 book Competition and Entrepreneurship. That book, whose essence is captured by the opening essays in this collection, brought the Austrian tradition into serious conversation with the rest of the discipline of economics in a way that the post-war foundational works of Mises, Hayek, and Murray Rothbard had not. Kirzner’s work showed young scholars a path forward for once again making the Austrian school relevant in the larger world of economics. That path was not just about the substantive content of his work, but also in Kirzner’s deep scholarship and abundant passion for economics in general and the Austrian school specifically.

More than forty years later, dozens of Austrian economists have tenured positions at universities across the US and the world, and they have published hundreds of books and articles with top-ranked university presses and in the most highly respected journals in the discipline. Each month seems to bring news of a new research center at some university and the Society for the Development of Austrian Economics continues to grow and extend its presence in the discipline. The essays in this collection capture the essence of that approach as presented in the hands of one of its masters and one of the true gentlemen of economics. It is with great joy that FEE presents these essays. You are in for an intellectual treat as you navigate your way through one of the great economic minds of the last century.