His personality might be working against the same policies he supports.

I suppose the title to this post sounds like wishful thinking. And perhaps it is. Nonetheless, I am seeing increasing signs that Trump's unpopularity may be tending to discredit some of his policy ideas. Here's The Economist:

EU deals with Singapore and Vietnam will face tricky votes in the European Parliament later this year. Cecilia Malmstrom, the EU's doughty trade commissioner, is touring the EU making the case for deals that uphold European values. But officials quietly harbour the hope that America's president has helped their case by turning opposition to trade toxic. Thanks to Mr Trump's influence the public mood in Germany, in particular, has become much less anti-trade since last year.

In the US, polls show support for foreign trade is soaring dramatically higher, and opposition is in free fall: 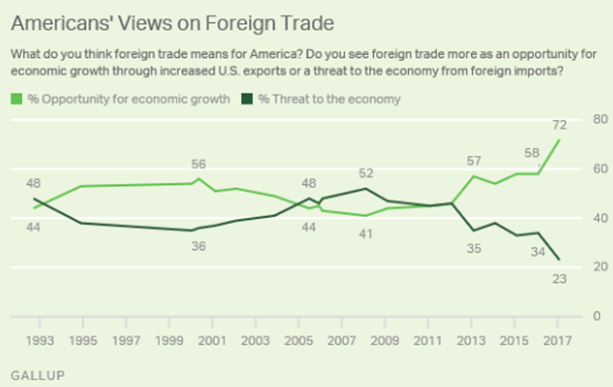 Little by little, the narrative that President Trump and his top adviser, Stephen K. Bannon, have been telling about what is happening in this country is getting translated into concrete policy specifics. And Americans are recoiling from the results.

The CNN poll tries to pin down public sentiment about Trump's expanded deportation efforts. It finds that 58 percent of Americans worry that those efforts "will go too far and result in deportation of people who haven't committed serious crimes," while only 40 percent worry that those efforts "won't go far enough and dangerous criminals will remain."

The poll also finds that a whopping 90 percent favor allowing those who have been working here "for a number of years," know English, and are willing to pay back taxes to stay and eventually apply for citizenship. Only nine percent want them deported. And 60 percent say the government should prioritize legalizing those working here illegally over deporting them.

This mirrors a recent Quinnipiac poll finding that support for allowing undocumented immigrants to remain is at a new high of 63 percent, even as a plurality thinks Trump's deportation policies are "too aggressive." Meanwhile, sizable majorities disapprove of Trump's planned border wall and ban on refugees and migrants from Muslim-majority countries.

I tend to be pro-immigration, but if I were opposed to immigration I would try to avoid deporting the most sympathetic characters:

(CNN)Helen Beristain voted for Donald Trump even though she is married to an undocumented immigrant.

In November, she thought Trump would deport only people with criminal records – people he called "bad hombres" – and that he would leave families intact.

"I don't think ICE is out there to detain anyone and break families, no," Beristain told CNN affiliate WSBT in March, shortly after her husband, Roberto Beristain was detained by US Immigration and Customs Enforcement.

On Wednesday, Beristain was proven wrong as ICE split her family across two countries.

Roberto Beristain, 44, was deported back to Mexico despite having no criminal record, family attorney Adam Ansari said.

"He hadn't committed any crimes. He didn't even have a parking ticket," Ansari said. "From everyone's accounts he is probably one of the most lovable guys you will ever meet. He is a loving husband and father. And he put a lot of work into his restaurant."

P.S. In case you think I just cherry-picked a few examples, note that I also could have mentioned Obamacare, which is becoming increasingly popular. However, I don't consider the ACA to be a "liberal" policy, in the original (political) sense of the term 'liberal'.