Is Good Globalism Being Undermined by Bad Globalism?

The biggest challenge, when I talk to politicians about the free-market agenda, is convincing them that they should restrain the growth of government. To be more specific, I think they often understand and accept the argument that ever-rising fiscal burdens are bad for a nation’s economic and moral health, but they are afraid that voters and interest groups will kick them out of office if they reduce the size and scope of the public sector.

I have a different challenge when talking to ordinary people about the free-market agenda. They’re quite comfortable (at least in theory) with the notion that it’s good to cap the growth of government spending, but there is a lot of skepticism about trade. And their doubts sometimes persist even after I share my eight questions and five charts showing the folly of protectionism.

In part, I think these skeptics share Trump’s mistaken belief that a trade deficit is a sign of weakness. But I’ve also found in my many conversations that some people simply are not comfortable with globalization.

But what does that concept even mean?

In his latest column for the New York Times, Bret Stephens points out that there’s no clear definition of what it means to be pro-globalist.

I grew up in Mexico City… Since then, I have lived in Chicago, London, Brussels, Jerusalem, New York, and Hamburg. I suppose this makes me a “globalist” in certain eyes. To be a globalist means almost nothing—even “Davos Man” has to trundle home somewhere after the annual forum draws to a close. Rex Tillerson is as much a globalist as Samantha Power. Ditto for John Bolton and John Kerry, Charles Koch and George Soros, Mike Pompeo and Julian Assange. A term that embraces opposites has almost no explanatory power.

So he suggests a definition of what it means.

Maybe it’s time now to make “globalist” mean something after all. An earlier generation of globalists—they called themselves internationalists—had learned the lessons of the 1930s and understood that the U.S. could not cut itself off from the world and expect to remain safe from it. Successive generations of Americans—military and foreign-service officers, businessmen and teachers, humanitarians and entertainers—went out into the world and sought to make it a better place.

All of that sounds very appealing.

Especially when compared to what it means to be on the other side.

To be an anti-globalist…does specify something. …In short, anti-globalism is economic illiteracy married to a conspiracy mind-set.

Since I’ve written about the foolishness of protectionism and also explained why it’s silly to believe in conspiracy theories, I obviously agree.

But we have a problem. Globalism (or globalization, or internationalism, or the policies of “Davos Man,” or whatever you want to call it) increasingly is perceived to be about more than free trade and comity between nations. In the minds of market-oriented people, it is getting linked with other policies that cause considerable angst.

This is why I find this issue so frustrating.

Like Bret Stephens, I consider myself a globalist. To me, it’s a way of saying I want peaceful trade and investment flows between people in different nations. Heck, it’s also a way of saying I like and appreciate other peoples and other cultures.

But many of the other people who self-identify as globalists support policies that increase the power of governments over the private economy.

Here’s my simplified way of looking at this issue. All globalists are in favor of free trade and cross-border investment flows, but there’s then a division based on whether they want governments to compete or collude. And that’s basically a proxy for whether they favor small government or big government.

In this 2×2 matrix, the globalists are on the left side, but they’re divided between “Good Globalism” and “Bad Globalism.” Sort of the difference between Switzerland and Sweden. 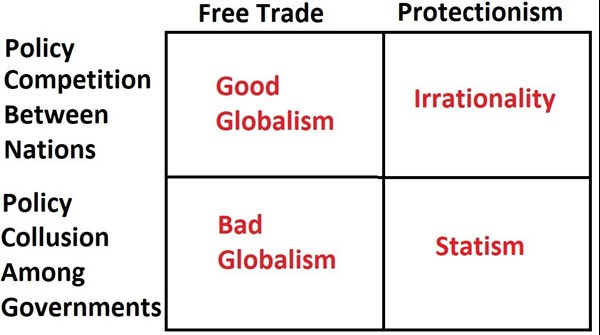 I initially identified the bottom-right as “Anti Globalism,” but decided that “Statism” was the better label. After all, there should be a place for those who want global agreements to expand the power of government while also closing borders to trade and investment. Maybe India would be a good example of this bad approach.

But I couldn’t figure out a good label for the top-right. So I put “Irrationality” for the obvious reason that competition and protectionism are mutually exclusive concepts. And I have no idea what country belongs in this box.

P.S. This is my first stab at this issue. I’m open to suggestions on better labels and descriptions for my 2×2 matrix. And I also freely admit that there are aspects of the globalization debate—such as migration and military alliances—that aren’t included in my analysis. I’ll let others figure out how to create and classify a 4-dimensional matrix.