Is “Buying Local” Even Possible?

Is any product truly “local?”

The residents of my bucolic town of Duvall, situated in the foothills of the Cascade Mountains, love local food. Townsfolk grow a variety of fruits and vegetables, raise cows and sheep, brew beer, and even distill liquor. Farm-to-table gatherings are popular in the area, and signs posted around town urge citizens to “buy local.”

My neighbors are jumping on the bandwagon of a growing trend to urge customers to “go local” in order to keep money in the community and/or reduce “food miles” that supposedly harm the environment. 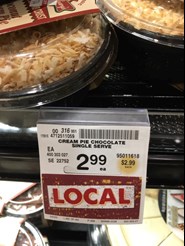 So imagine my surprise when I encountered a sign promoting a “local” food
product in the bakery aisle of our town’s Safeway (a corporate grocery chain). Was the delicious item a blueberry tart from the local “U-Pick” farm down the road? No! It was a single-serving chocolate cream pie topped with coconut shavings

How fantastic! My neighbors must now be setting up cocoa bean farms and planting palm trees.

I quickly inquired on the town’s social media discussion board regarding the whereabouts of these cocoa and coconut farms, only to be told that I was being silly; those foodstuffs do not grow well in the cool, damp climate of western Washington. “So why is this luscious pie labeled local?” I retorted quizzically. Well, the answer was simple: It was baked locally.

Well, then! My next task became to discover the whereabouts of this superb bakery. I figured I could walk over to the establishment and compliment the owners for successfully satisfying my taste buds. Upon investigating the label, however, I was surprised to find out that it was made in Airway Heights, Washington. I had never heard of Airway Heights. Further research indicated that it was near Spokane, WA, just a short 275 miles east of my town.

Wait a minute?! How can something that is roughly a five-hour drive away be “local?" How could we be “keeping money in the local community” if the likelihood of anybody from Airway Heights shopping in Duvall on any given day is close to zero?

How can something that is roughly a five-hour drive away be “local?"

Further queries led me to discover that Safeway labels any product made and sold in Washington as “local.” A pie baked just 25 miles further east in Idaho, a mere addition of 30 minutes on a five-hour drive, would not get the “local” label.

But what about Vancouver, British Columbia? That Canadian city is less than half the distance away (at 130 miles) even though it is in some far-flung “foreign” country. A slab of back bacon from Vancouver purchased in our town’s Safeway would not get the “local” seal of approval, whereas the farther-flung Airway Heights pie would. None of this makes any sense!

If you are as confounded as I was, then you might be suffering from the geographic confusion that comes naturally (and often gluten-free) with the “locavore” movement. Fortunately, basic economic logic provides an effective antidote to this intellectual malady. In essence, economics informs us that “home” is really wherever you want it to be.

Is Anything Really “Local?”

The operative question is whether any product is truly “local”? If you are familiar with Leonard Read’s famous I, Pencil, then you won’t be surprised to find out that even the simplest things (e.g., pencils) are made from materials and labor all over the world.

As for my pie, it turns out that Airway Heights, like Duvall, also lacks the cocoa and coconut farms to make the product’s content geographically local. These ingredients most likely come from Africa and/or Southeast Asia, by way of processing plants in Central America. But what about the labor? Granted, we could buy the ingredients from elsewhere and assemble them with “neighborly hands,” making it “local” labor, but does that even matter?

The only truly “local” thing I could eat here would be the mushrooms that pop up in our backyard.

Consider a food product that has ten ingredients and requires a baker. All ten ingredients come from some “non-local” source (perhaps 400 miles away). However, the pie is baked in ovens just down the street. The baker is a local fellow and we would guess he would spend his profits locally, or so we hope.

Now, consider a pie baked in Idaho by a “non-local” pastry chef, using wheat and milk produced in Duvall, with Duvallian hands. Here we have a situation of “local labor” providing two of the ten ingredients even though the fruits (or grains and dairy products) of their labor were shipped off to Idaho for final assembly. If we refused to buy this delicious tort because it wasn’t baked locally, we would not be helping to “buy local” wheat and milk. Those Duvall farmers would have less revenue to spend locally! Eegads, what have we done?!

From the perspective of “locavores,” does it matter what part of a product (including labor) is local, so long as something is local? If we want to ramp up our requirements and demand that the entire product be locally produced – from the material and labor going into producing the ingredients to the baker who does the final assembly – then we best prepare to really limit our choices or go hungry. To be entirely “local,” the citizens of Duvall would need to end their chocolate-coconut pie habits.

But even local foodstuffs such as carrots quickly fall off the list of things to consume “locally” considering that the farm machinery used to plant and harvest crops rely upon metal, gasoline, and labor sourced from far-off lands (perhaps even … gasp … Montana!). I personally figured the only truly “local” thing I could eat here in western Washington would be the mushrooms that pop up in our backyard in the spring and fall. I’m not sure if I want to risk that.

Local to My Taste Buds

Of course, there are other objections to the “consume local” movement. The issue of “food miles” often fails to take into account the efficiencies of comparative advantage of producing goods elsewhere in the world, not to mention the rapid decrease in transportation costs over time.

If Airway Heights is “more local” than Vancouver, even though the former is farther away, aren’t we merely playing rhetorical games?

Although my town grows great blueberries in the spring, it is cheaper – when all resources are considered – to get them from Chile in the winter. Thanks to modern transportation technology, Chile is more “local” than it used to be.

And as for “keeping money in the local community,” I have tried to convince local farmers and bakers not to buy Toyotas with the “local” dollars I give them, but that contract is just too difficult to enforce. Apparently, they like Toyotas. (I also notice sometimes that the dollars I use were printed in Philadelphia and Denver!)

My point to all the locavores is that “local” is really a state of mind. If Airway Heights is “more local” than Vancouver, even though the former is physically farther than the latter, aren’t we merely playing rhetorical games? Does it matter that the ingredients from my chocolate pie come from Africa?

It may be nice to support a neighbor you see face-to-face, but the cocoa farmer in Nigeria or baker in Idaho might be just as wonderful folk and deserving of my gains-from-trade. Since I’m not sure exactly, why not assume the best? For me, “local” isn’t so much where something is produced, so long as it is near to my taste buds. Now, who has a fork?

Anthony Gill (Ph.D. UCLA) is a professor of political science at the University of Washington, recipient of the 1999 UW Distinguished Teaching Award, author of The Political Origins of Religious Liberty (Cambridge University Press) and Rendering unto Caesar (University of Chicago Press), and will take the last donut when nobody is looking (but don’t tell anyone).