In Uber-less Austin, People Are Using Facebook to Find Rides

Something unsurprising but very interesting is happening in Austin, Texas.

Last month, voters in Austin voted against Proposition 1, which would have repealed regulations mandating that wannabe rideshare drivers include fingerprints as part of their applications. Uber and Lyft left the city in the wake of the vote.

Austin residents looking for a ride need not resort to taxis. Rather, they can join the Facebook group “Arcade City Austin/Request a Ride.” Members of the group can request rides. These requests includes arrival and pickup locations as well as preferred times. Drivers in the group interested in driving the passenger can comment on the request with a phone number, fare, and “brochure” showing that Uber and Lyft had approved them to drive.

As Arcade City notes, their approach removes “corporations” (read: Uber) and other institutions that act as middlemen in popular ridesharing services. There is no Uber or Lyft connecting passengers with drivers, the two parties voluntarily submit information to one another in order to make each other better off.

As great as it is to see so-called micro-entrepreneurs in Austin working around poorly-considered local regulations, the Facebook group isn’t without concerns. 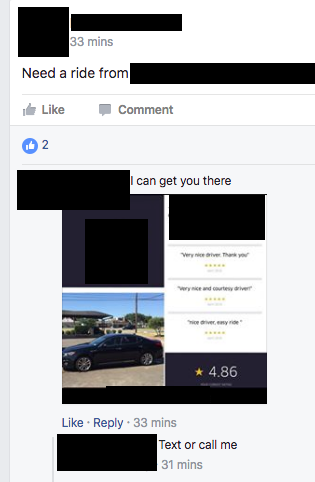 The “brochures” put on display by drivers could be faked without too much difficulty. A driver found via the Facebook page could be a dangerous person who knows how to use Photoshop. Passengers do not know for sure that their potential driver was cleared by Uber or Lyft. In fact, they don’t even know if the driver has a valid license or insurance.

There are additional safety concerns associated with Arcade City’s Facebook page. It doesn’t seem difficult to be added to the Facebook group. In fact, I was promptly added to the group after I sent in my request, despite the fact that I work in Washington, D.C. and live in Virginia. It’s not hard to see how this page could be used by stalkers or would-be assailants to identify or track targets. As the screenshot below shows, passengers using the page can reveal specific addresses and telephone numbers. 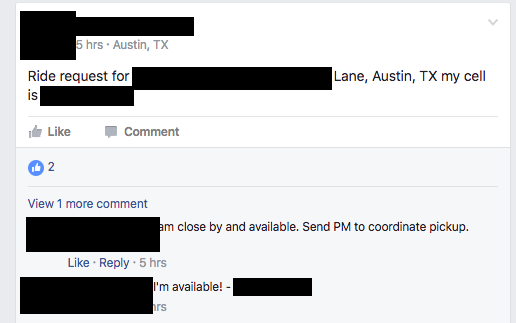 Arcade City, which has yet to release its app, claims that their platform will allow drivers to create a profile that can embed a social media account, which will enable them to list their safety qualification, as TechCrunch explained:

Arcade City is confident they have a solution that will protect riders, while still remaining decentralized.

The startup explained that each driver will have a profile that can embed a Facebook or Twitter profile, background check, FBI check, driver’s license, proof of physical address, and more. Each driver can attach as few or as many of these verification options as they like, and the app will use these to compile a score that summarizes trustworthiness for each driver. Essentially, since riders will always be able to pick their driver, drivers who choose not to verify should be weeded out of the platform.

However, while this approach may work to provide some safety reassurance, it remains the case that the current Facebook page doesn’t provide rides as safe as Uber or Lyft rides.

Ironically, Uber and Lyft leaving Austin over a safety regulation has left residents with a ridesharing platform more dangerous than the services offered by Uber and Lyft.

Matthew Feeney is a policy analyst at the Cato Institute.