If We Step Up the Drug War, You'll Be a Victim 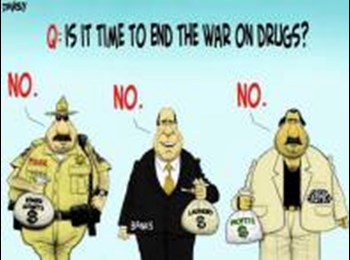 The right answer is All of the Above. Politicians have ruined lives and wasted money in a futile campaign to stop people from recreational drug use.

It may be true that people who use drugs are being stupid. Or even immoral. But the key thing to understand is that it’s a victimless crime.

Actually, that’s not true, there are victims. They’re called taxpayers, who have to finance the government’s drug war. And there are secondary victims thanks to bad laws (dealing with asset forfeiture and money laundering) that only exist because of the drug war.

Speaking of which, here’s another horror story from the drug war:

A report by the Justice Department Inspector General released Wednesday found that the DEA’s gargantuan amount of cash seizures often didn’t relate to any ongoing criminal investigations, and 82 percent of seizures it reviewed ended up being settled administratively—that is, without any judicial review—raising civil liberties concerns … the Inspector General reports the DEA seized $4.15 billion in cash since 2007, accounting for 80 percent of all Justice Department cash seizures.

Here’s the jaw-dropping part of the story:

… $3.2 billion of those seizures were never connected to any criminal charges.

In other words, the government took people’s money even if they weren’t charged with a crime, much less convicted of a crime.

Drug users also can be victims. Heck, sometimes people are victims even if they’re not users, as we see from this great moment in the drug war:

“They thought they had the biggest bust in Harris County,” Ross LeBeau said. “This was the bust of the year for them.” A traffic stop in early December led to the discovery of almost half a pound of what deputies believed to be methamphetamine. The deputies arrested LeBeau and sent out a press release, including a mug shot, describing the bust. According to authorities, the arrest was due to deputies finding a sock filled with what they believed to be methamphetamine … After the arrest, LeBeau was fingerprinted and booked into a jail where he spent three days before being released. The problem came after two field tests, performed by deputies, came back positive for meth. Later a third test was conducted by the county’s forensic lab which revealed that the kitty litter was not a controlled substance. The case was later dismissed.

And more bad things like this are probably going to happen because the Justice Department now wants a more punitive approach to victimless crimes.

C.J. Ciaramella of Reason reports on the grim details:

Attorney General Jeff Sessions ordered federal prosecutors to seek the toughest charges and maximum possible sentences available, reversing an Obama-era policy that sought to avoid mandatory minimum sentences for certain low-level drug crimes … the overall message is clear: Federal prosecutors have the green light to go hard after any and all drug offenses … The shift marks the first significant return by the Trump administration to the drug war policies that the Obama administration tried to moderate. In 2013, former Attorney General Eric Holder ordered federal prosecutors to avoid charging certain low-level offenders with drug charges that triggered long mandatory sentences. The federal prison population dropped for the first time in three decades in 2014, and has continued to fall since.

Some Republicans are unhappy about this return to draconian policies:

“Mandatory minimum sentences have unfairly and disproportionately incarcerated too many minorities for too long,” Sen. Rand Paul (R-KY) said in a statement. “Attorney General Sessions’ new policy will accentuate that injustice … Sen. Mike Lee (R-UT), although he did not directly criticize Sessions, wrote in a tweet Friday morning that “to be tough on crime we have to be smart on crime. That is why criminal justice reform is a conservative issue.”

For what it’s worth, Sessions isn’t the only one who deserves blame:

While it’s easy to point the finger at Sessions … Congress ultimately passed the laws the Justice Department is tasked with enforcing. Lawmakers in Congress had a golden window of opportunity over the past three years to revise federal sentencing laws—with bipartisan winds at their back and a friendly administration in White House—and failed miserably.

And there is a tiny bit of good news:

… the Office of National Drug Control Policy … Trump plans to reduce the agency’s budget by 95 percent … there are plenty of actual harm reduction advocates who would be happy to see the agency close up shop.

Though don’t get too excited:

… you know what federal agency with drug policy ramifications is not dormant? The Justice Department … In the grand scheme of the drug war, who might occupy the ONDCP’s bully pulpit matters less than the army Sessions is building.

So don’t hold your breath waiting for better policy.

Here’s another reason why the war on pot is so absurd. As reported by the Daily Caller, people without access to marijuana are more likely to get in trouble with opioids:

Last but not least, an article in Reason explains how greedy politicians are undermining the otherwise successful pot legalization in Colorado:

Colorado … voters legalized recreational marijuana in 2012, transforming the popular stuff from a prohibited vice to a substance that could be produced, bought and sold without the hassle of hiding dealings from the authorities and the fear of arrest for voluntary transactions. Yet the marijuana black market is still going strong over four years later, with many sellers and customers willing to take a chance on legal consequences rather than make a risk-free deal … the driving force behind the black market … is taxes so sky high and regulations so burdensome that they make legal pot uncompetitive. “An ounce of pot on the black market can cost as little as 180 dollars,” according to PBS correspondent Rick Karr. “At the store Andy Williams owns, you have to pay around 240 dollars for an ounce. That’s partly because the price includes a 15 percent excise tax, a 10 percent marijuana tax, the state sales tax, and Denver’s marijuana sales tax.” Colorado also piles on expensive regulatory requirements to get a license. 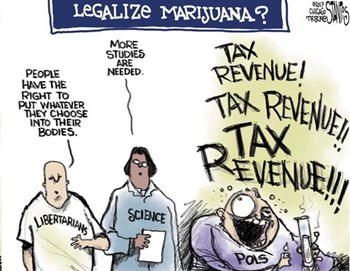 This is not a surprise.

I wrote back in 2015 that the tax burden was excessive.

Indeed, I even wondered if legalization in Colorado was a good thing if the net result was a big pile of tax revenue that could be used to expand government.

The libertarian part of me says Colorado made the right decision, though the fiscal economist part of me definitely sees a downside.

And that downside may become an even bigger downer:

P.S. I wonder if Senator Steadman realizes he just embraced the Laffer Curve?