If Scandinavia Is Socialist, Then So Is the U.S.

The world is not black and white, at least when measuring the extent of bad government policy.

In yesterday’s column, I shared a humorous video mocking the everywhere-it's-ever-been-tried global failure of socialism.

And I tried to preempt the typical response of my left-wing friends by pointing out that Scandinavian nations are not role models for statism.

In global ranking of economic liberty, Nordic nations score relatively high, with Denmark and Finland in the top 20. Scandinavian nations have large welfare states, but otherwise have very laissez-faire economic policies. Nordic nations got rich when government was small, but growth has slowed since welfare states were imposed.

Based on some of the emails I received, some critics have a hard time understanding this argument.

All of which is very frustrating since I’ve repeatedly tried to make this point. So I pondered the issue for hours, trying to figure out whether there was some way of helping people grasp the issue.

Maybe this chart from Economic Freedom of the World will help. It shows, based on the five major categories of economic liberty, that the once-significant gap between the United States and Scandinavia has almost completely disappeared.

In other words, anyone who claims that Scandinavian nations are socialist must also think that the United States also is socialist.

To be sure, there are differences. If you look at specific categories of economic liberty, America gets a noticeably better score than Nordic nations on fiscal policy.

But we get a significantly worse score for governance issues such as property rights, corruption, and the rule of law.

We also do a bit worse on trade and slightly better on regulation.

The bottom line is that both the United States and Scandinavian nations are market-oriented, but also saddled with plenty of bad government policies. If that makes us socialist, then what’s the right term for nations where government has a much bigger footprint, such as France, Italy, or Greece?

How about Venezuela and Zimbabwe?

Or North Korea and Cuba?

What I’m saying is that there’s a spectrum and we should be cognizant that there are different degrees of statism. And nations closer to one end are much different from countries closer to the other end.

Plenty of other people make similar arguments about the Nordic countries.

Tim Worstall, writing about Finland for CapX, emphasizes the laissez-faire nature of Scandinavian nations while also pointing out that there’s a degree of decentralization that makes big government somewhat less inefficient.

…high tax rates do indeed reduce economic growth rates by undercutting incentives. So do interfering bureaucracy and state planning. And so if you’re going to go overboard on one of those two then you’ve got to be minimalist on the other point. In other words, you’ve got to kill off bureaucracy in order to leave room for the tax rates and still have a growing economy. …That is more or less how Finland and other Scandinavians do things. …The other important point is quite how decentralised they all are. …A much larger piece of the pay packet goes to the local government… That money raised locally is then spent locally too. …There’s thus an efficiency to the system, something that gets lost when…people send their cash off to the national government to be distributed without that local accountability. …if you want that Scandi life then you’ve got to do it as they do. Very local government and taxation plus a distinctly less economically interventionist government.

Amen. Local government oftentimes is bad, but it’s rarely as bad as a centralized system.

I also found a must-read 2016 article for FEE by Corey Iacono. 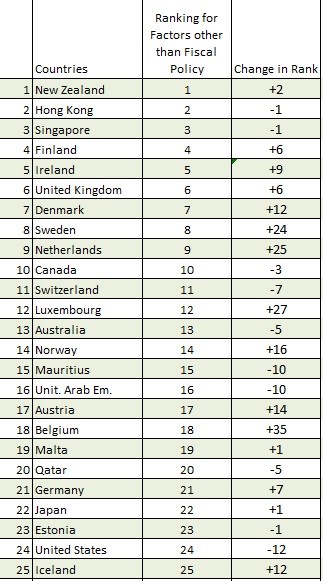 If you don’t believe Worstall and Iacono, check out this table of data I prepared back in 2015.

I took the Economic Freedom of the World rankings and I removed the variables for fiscal policy.

And what you find is that Denmark, Sweden, and Finland were all in the top 10 for economic liberty. And Norway was #14.

That’s compared to #24 for the United States.

Heck, there were plenty of other European nations that ranked as being more free market than the United States.

So we should be grateful that we only have a medium-sized welfare state. Because our better score on fiscal policy helps to offset our comparatively anemic scores on the other four variables.

Having pointed out that the United States now has only a rather small advantage over Scandinavian nations when looking at all five measures of economic liberty, that’s still better than nothing.

It probably explains, for instance, why Americans of Scandinavian descent earn so much more than their cousins who remained back home.

And why Americans of all backgrounds generally enjoy higher living standards than folks in Europe, even the ones in Nordic nations.