Close to 1,500 people were crammed into that club on Saturday night.

I spent Saturday night at a punk/folk show. Will Varley, Arkells, and Murder by Death opened for Frank Turner in a club called Bogart’s in Cincinnati. I’m a huge fan of Frank Turner’s smart and angry libertarian-leaning protest music, and Steve had never seen him play live before. There was no way we were going to miss it.

When we got our tickets, it hadn’t occurred to me that the show fell on the night after the inauguration. Standing in line waiting to get into the club, I started to get a little nervous.

Close to 1500 people crammed into that club on Saturday night.There had been a large protest march in Cincinnati that morning, and reports were coming in from DC of broken windows and other property damage associated with the larger march there. Punk shows do not have a pristine reputation where violence is concerned. And there was already a significant police presence outside the club. Had I gotten us into a situation we were going to regret?

Close to 1500 people crammed into that club on Saturday night. Steve and I were one or two rows behind the barricade between the stage and the audience. We were a few feet away from what became an unbridled circle/mosh pit. And we were standing between two families who had come with their kids.

It should be terrifying. But it’s not.How do I explain to you what it’s like when the headliner starts to play at a punk show? You’ve spent the three opening acts jumping up and down already. You’re hot and sweaty and bumping into the people around you. The floor is already slippery with spilled beer. Then the lights go down and that whole heaving mass of humanity pushes closer to the stage. Because we all just want to get closer to the wall of sound and to the high priest of noise who is going to bring it to us.

It should be terrifying. But it’s not. It’s ecstatic, in the emotional and religious sense. It pulls you outside of yourself and makes you part of something larger.

But we all know how wrong that can go. The maenads, in similarly ecstatic moments, tore animals and humans to shreds. No one who knows anything about the history of the 20th century can fail to be concerned about what happened when large groups of people gather in front of a charismatic individual and let all their emotions out to play.

I should have had a lot more faith in my people.

Out of all those 1500 people at the show—and with the two of us placed at the most raucous part of the club—Steve and I saw two or three people ejected by security (with surgical precision) for excessive inebriation. One fight got broken up. That’s it.

Because punk looks scary from the outside, the ethics internal to the culture are strong. I’m pretty sure there was more bad behavior at the Garth Brooks concert that same night.

This is because while Punk looks scary from the outside, the ethics internal to the culture are strong. Done right, Punk says “No one in authority will take care of us. No one in authority can be trusted. We have to take care of and trust each other.” Vincent Ostrom tells us that self-governance is the crucial element for the survival of democracy. It doesn’t always work, of course, but it can.

And on Saturday in Cincinnati, it did. Frank Turner paused once a while throughout the show to ask, “Is everyone having a good time?” And he didn’t mean it in Vegas lounge act fashion. He added, “If you’re not having a good time, if you have a problem, these folks [indicating the security crew] are here to help you.” He reminded the crowd, “It’s important that you not be the [expletive] here. If you’re having a good time, look around you and check on the people around you. Make sure they’re having fun, too.”

And that fight that broke out? He paused at the end of a song to ask, “Are you [expletive] fighting? Don’t do that. Fighting is for [expletive] morons.” 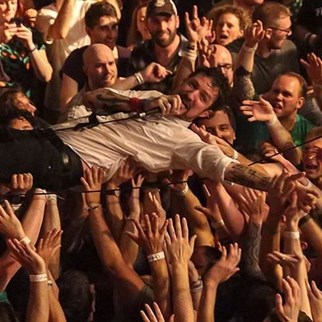 The ethic that makes an artist do that, and the ethic that brings a crowd of people to see him is the ethic that underlies one of the great punk traditions—stage diving and crowd surfing. While Wikipedia will tell you that stage diving was “initially seen as confrontational and extreme,” for me, it is an act of radical trust between a performer and a crowd.

Turner engineered two stage dives on Saturday night. The first time, he called up a friend from the audience and had him dive into the crowd, which was instructed to “Pass Jeremy back to the bar” so he could bring Turner two shots of Jamieson’s. The not-insubstantial Jeremy was passed from hand to hand, over the tops of 1500 people’s heads all the way to the bar at the back of the room, then all the way back up to the stage, cups in hand, where he and Turner downed their whiskey.

Later in the evening, Turner himself dove from the stage. His fans bore him up for most of the length of a song and, I think, would have held him in the air all night.

We Can Govern Ourselves

It’s a bonus for me that so many of Turner’s lyrics have a mindset that aligns with mine. I’d actually intended to refer to several of them in the body of this piece. But at this show, this time, on this night, what I was most grateful to him for was reminding me that we can govern ourselves. No one else will do it. And we shouldn’t trust anyone who wants to try.

But that doesn’t have to be scary. If we each make sure that we are not the jerk in the room, if we each check to make sure everyone else is having fun, and if we agree to hold each other up and share a little Jameson’s, we’ll be fine.