Peace, low taxes, small government. That's how you do it.

The recipe for growth and prosperity isn’t very complicated.

Adam Smith provided a very simple formula back in the 1700s.

For folks who prefer a more quantitative approach, the Fraser Institute’s Economic Freedom of the World uses dozens of variables to rank nations based on key indices such as rule of law, size of government, regulatory burden, trade openness, and stable money.

One of the heartening lessons from this research is that countries don’t need perfect policy. So long as there is simply “breathing room” for the private sector, growth is possible. Just look at China, for instance, where hundreds of millions of people have been lifted from destitution thanks to a modest bit of economic liberalization.

That’s the main message in this new video from the Center for Freedom and Prosperity.

The first part of the video, narrated by Abir Doumit, reviews success stories from around the world, including Hong Kong, Singapore, Chile, Estonia, Taiwan, Ireland, South Korea, and Botswana.

Pay particular attention to the charts showing how per-capita economic output has grown over time in these jurisdictions compared to other nations. That’s the real test of what works. 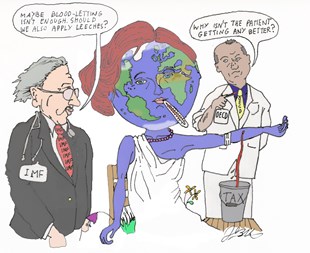 The second part of the video exposes the scandalous actions of international bureaucracies, which are urging higher fiscal burdens in developing nations even though no poor nation has ever become a rich nation with bigger government. Never.

Yet bureaucracies such as the United Nations, the International Monetary Fund, and the Organization for Economic Cooperation and Development are explicitly pushing for higher taxes in poor nations based on the anti-empirical notion that bigger government is a strategy for growth.

As Ms. Doumit remarks in the video, these bureaucracies never offer a shred of evidence for this bizarre hypothesis.

And what’s especially frustrating is that the big nations of the western world (i.e., the ones that control the international bureaucracies) all became rich when government was very small.

And while the bureaucracies never provide any data or evidence, the Center for Freedom and Prosperity’s video is chock full of substantive information. Consider, for instance, this chart showing that there was almost no redistribution spending in the western world as late as 1930. 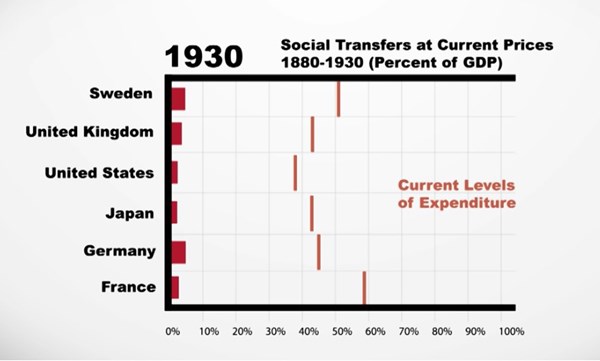 Unfortunately, the burden of government spending in western nations has metastasized starting in the 1930s. Total outlays now consume enormous amounts of economic output and counterproductive redistribution spending is now the biggest part of national budgets.

But at least western nations became rich first and then made the mistake of adopting bad fiscal policy (fortunately offset by improvements in other areas such as trade liberalization).

The international bureaucracies are trying to convince poor nations, which already suffer from bad policy, that they can succeed by imposing additional bad fiscal policy and then magically hope that growth will materialize.

And having just spent last week observing two conferences on tax and development at the United Nations in New York City, I can assure you that this is what they really think.