How Middle-Class Europeans Fare Under the Welfare State

Even the OECD admitted that European nations would grow faster if the burden of government was reduced.

According to progressives like Bernie Sanders, European nations have wonderfully generous welfare states financed by high tax rates on the rich.

They’re partly right. There are very large welfare states in Europe (though I wouldn’t use “wonderfully” and “generous” to describe systems that have caused economic stagnation and high levels of unemployment).

But they’re wrong about how those welfare states are financed. Yes, tax rates on the rich are onerous, but not that much higher than in the United States. Instead, the big difference between America and Europe is that ordinary people pay much higher taxes on the other side of the Atlantic.

The US Has the Most “Progressive” Tax System

Indeed, I’ve previously cited Tax Foundation data showing that the United States arguably has the most “progressive” tax system in the developed world. Not because we tax the rich more, but simply because we impose comparatively modest burdens on everyone else.

And now we have some new evidence making the same point. Joseph Sternberg of the Wall Street Journal has some very sobering data on how the German tax system imposes a heavy weight on poor and middle-income taxpayers.

Europeans believe their tax codes are highly progressive, giving lower earners a break while levying significant proportions of the income of higher earners and corporations to fund generous social benefits. But that progressivity holds true only for direct taxes on personal and corporate income. Indirect taxes, such as the value-added tax on consumption and social-security taxes (disguised as “contributions”), are a different matter. The VAT disproportionately affects lower earners, who spend a higher proportion of their incomes. And social taxes tend to kick in at lower income levels than income taxes, and extract a higher and more uniform proportion of income. …if you look at the proportion of gross household income paid in all forms of tax, the rate varies by only 25 points. The lowest-earning 5% of households pay roughly 27% of their income in various taxes—mainly VAT—while a household in the 85th income percentile pays total taxes of around 52%, mostly in social-security taxes that amount to nearly double the income-tax bill.

Here’s a chart the WSJ included with the editorial.

As you can see, high payroll taxes and the value-added tax are a very costly combination. 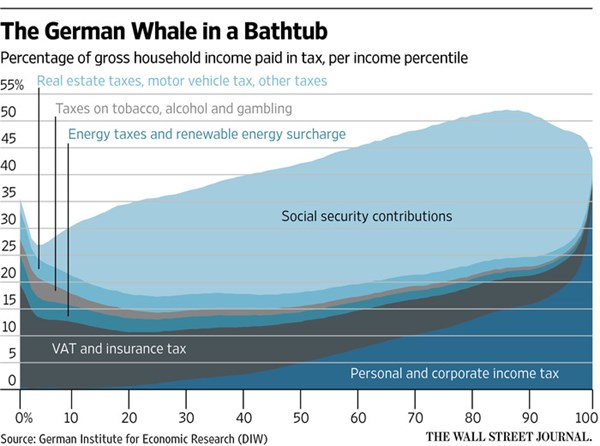 And the rest of Europe is similar to Germany.

…Germany is not unique. The way German total revenues are split among income taxes, social taxes and the consumption tax is in line with the rest of Western Europe, as are its tax rates, according to OECD data. If other countries are more progressive than Germany, it’s only because Germany applies its second-highest marginal income-tax rate of 42% at a lower level of income than most.

Speaking of the OECD, here’s the bureaucracy’s data on the burden of government spending.

Germany is in the middle of the pack, with the public sector consuming 44 percent of economic output (Finland edges out France and Greece for the dubious honor of having the most expensive government). 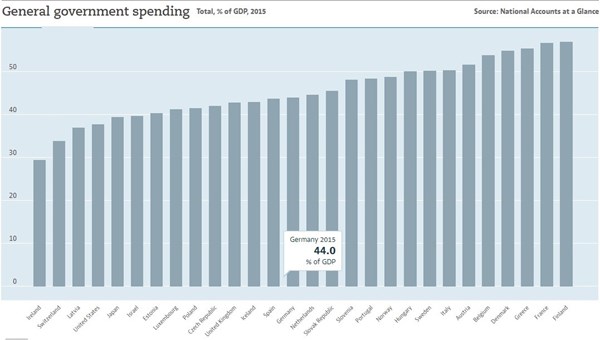 The overall burden of the public sector is far too high in the United States, but we’re actually on the “low” side by OECD standards.

According to the data, total government spending “only” consumes 37.7 percent of America’s GDP. Only Ireland, Switzerland, and Latvia have better numbers (though my friend Constantin Gurdgiev explains we should be cautious about Irish economic data).

But I’m digressing. The point I want to emphasize is that punitive taxes on poor and middle-income taxpayers are unavoidable once politicians decide to impose a large welfare state.

Which is why I’m so inflexibly hostile to any tax increase, especially a value-added tax (or anything close to a VAT, such as the BAT) that would vacuum up huge amounts of money from the general population. Simply stated, politicians in Washington will have a hard time financing a bigger burden of government if they can only target the rich.

Sternberg makes the same point in his column.

Tax cuts have emerged as an issue ahead of Germany’s national election next month, with both major parties promising various timid tinkers… Not gonna happen. The VAT and social taxes are too important to the modern welfare state. The great lie is that there are a) enough “rich people,” b) who are rich enough, that c) taxing their incomes heavily enough can pay for generous health benefits and an old-age pension at 65. None of those propositions are true, and the third is especially wrong in an era of globally mobile capital and labor. That leaves the lower and middle classes, and taxes concealed in price tags or dolled up as “insurance contributions” to obscure exactly how much voters are paying for the privilege of their welfare states. …reform of the indirect taxes that impose such a drag on European economies awaits a more serious discussion about the proper role of the state overall.

There’s no feasible way to ease the burden on ordinary German taxpayers (or regular people in other European nations) unless there are sweeping reforms to reduce the welfare state.

And the moral of the story for Americans is that we better enact genuine entitlement reform if we don’t want to suffer the same fate.

P.S. If you don’t like German data, for whatever reason, I wrote last year about Belgium and made the same point about how a big welfare state necessarily means a bad tax system.

P.P.S. By the way, even the OECD admitted that European nations would grow faster if the burden of government was reduced.