How Many People Are Killed by Police?

Until this year, we had no idea – because nobody was counting.

How many people are killed by police?

It’s a simple and important question, but, until this year, the shocking answer was “we have no idea.” There is no central authority systematically keeping track of killings by law enforcement, and police in most states are not required to report the use of lethal force to anyone.

The FBI’s annual crime report does keep track of homicides reported by police as justified killings by police. As defined by the FBI, “justifiable homicide by law enforcement” means “the killing of a felon by a peace officer in the line of duty.” From 2000 to 2014, the FBI reported an average of 390 justifiable homicides by police each year, with a very slight (but erratic) upward trend.

The obvious question was, how many unjustifiable killings were committed by law enforcement? There is no report for that at all: unjustified homicides by police would, in theory, be recorded as generic murders. Moreover, because police departments themselves decide what is justifiable, there’s plenty of room for doubt about whether all those homicides really were justified — or whether police actually reported all of their killings.

So from 2003 to 2009, the Bureau of Justice Statistics (BJS) tried to track police killings more systematically, using data (once again, voluntarily reported by police) on “arrest-related deaths: homicides by law enforcement.” 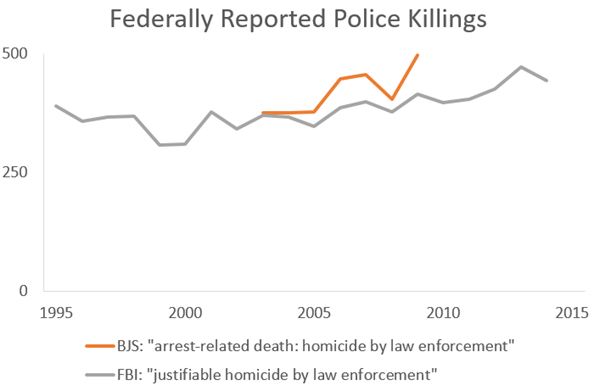 This data doesn’t distinguish between justified and unjustified killings, so you might think that you could simply subtract the FBI’s “justifiable” killings from the BJS total killings, and you’d get the number of “unjustifiable” killings. If you do that math, the BJS recorded 2,931 “arrest-related homicides” by police, and over the same time, the FBI recorded 2,660 “justifiable homicides” by police. That’s a difference of 271 (presumably unjustifiable) homicides, about 9 percent of the total, over seven years.

But not so fast. The BJS and FBI numbers conflict in weird and impossible ways. As the charmingly titled blog “numbskulduggery” points out, from 2003 to 2005, California police reported 160 homicides to the BJS, while reporting 354 justifiable homicides to the FBI — “implying that in California there were 194 more justified police shootings than there were total police shootings.” In addition, some states participated in the BJS program but not the FBI’s, or vice versa, but they are lumped into the total comparison anyway.

So despite two federal databases, there was no clear picture on the number of police killings, and the data was hopelessly muddled by states and agencies not participating or reporting conflicting numbers.

That was the situation in 2014, the last time I wrote about this. I concluded then: “Still, this record is the best data there is and probably tracks the true figure pretty well.”

A lot has changed since then, following national controversy over the deaths of Eric Garner and Michael Brown in the summer of 2014. And, boy, was I wrong. Cops do not report anywhere close to the true number of people they kill, either because of neglect, confusion, or not wanting to draw attention to their department. 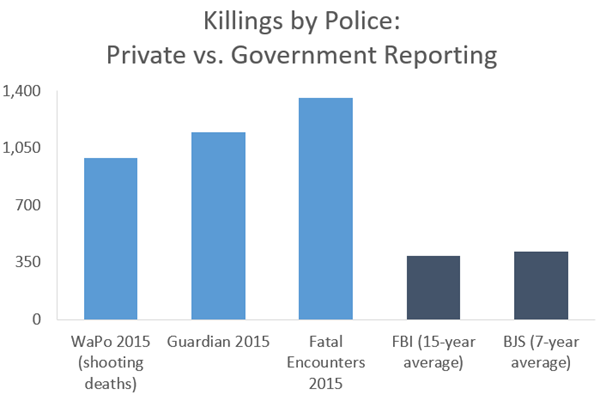 These are two, three, four times higher than the numbers typically reported by the FBI or the BJS. (This, of course, does not and cannot say anything about how many are justified or not.)

Are Police Killings More Common – Or Are We Just Paying More Attention?

Fatal Encounters’ data from earlier years is admittedly incomplete, but they have so far collected more than 14,000 records of people killed in interactions with police from January 2000 through June 2016. From 2000-2014, FE records at least 12,137 people killed by police, compared to just 5,830 reported to the FBI by police over the same period — and they estimate their records are only about 60 percent complete so far.

Unfortunately, it’s not yet possible to compare national trends over time. While FE believes they have complete records for all 50 states since 2013, we don’t know for sure how complete their records are from prior years. There are many obstacles: searching and finding old media and government reports is difficult, and the likelihood of a police killing being reported on at all probably decreases the further back in time you go. Nonetheless, FE states:

So a comparison of just these 28 “complete” states should give us a true indication of the frequency of police killings over time, in at least half the country. What it shows is alarming and incredible: a steep and steady increase from 359 police killings in 2000 to 739 in 2015. 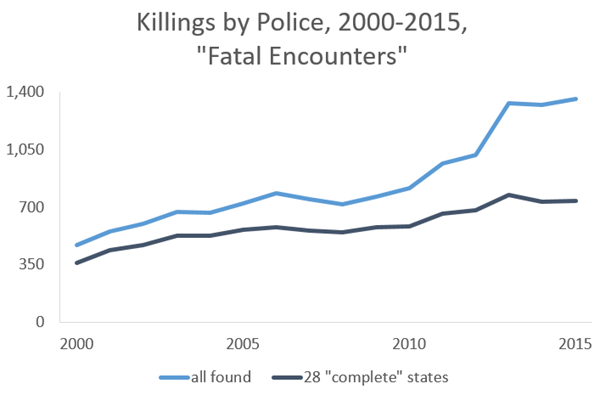 My rule of thumb with numbers that look unbelievable is generally “don’t believe them,” at least without corroboration. There are a few reasons to be skeptical of this trend. Reporting might be a lot better in recent years, and reports in prior years (if they were made at all) may be increasingly difficult to find the further back you go. In addition, FE’s totals for the last three years — the years they consider most complete — are pretty flat.

So I can’t testify to the quality or completeness of the historical data FE has assembled, but if the trend is significantly upwards, that would be disturbing, since violent crime has hugely declined over the same period, as have attacks on police officers.

A Puzzle Missing Most of Its Pieces

So here’s what we know now about how often cops have been killing people in the United States: 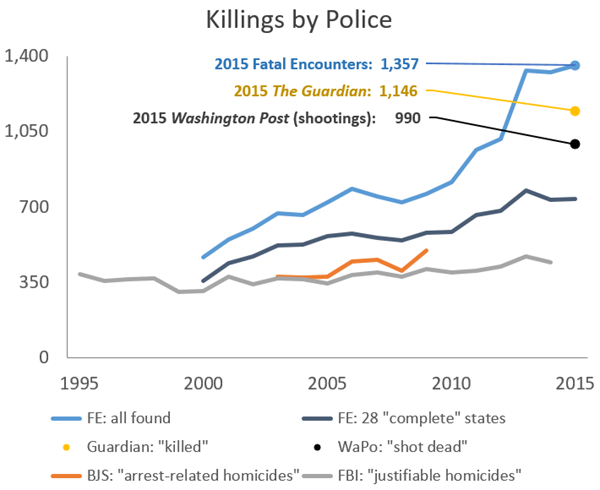 The federal data is mostly useless, the private data is better but still incomplete, and there’s a bunch of recent data points and a couple possible (but not definitive) trends that seem suggestive. Like a puzzle missing most of the pieces, the data so far are interesting, but not illuminating.