How Fascism Became the Political Boogeyman

"Fascism" isn't just a term used to describe your political opponents. It is its own unique form of collectivism and its past should not be forgotten. 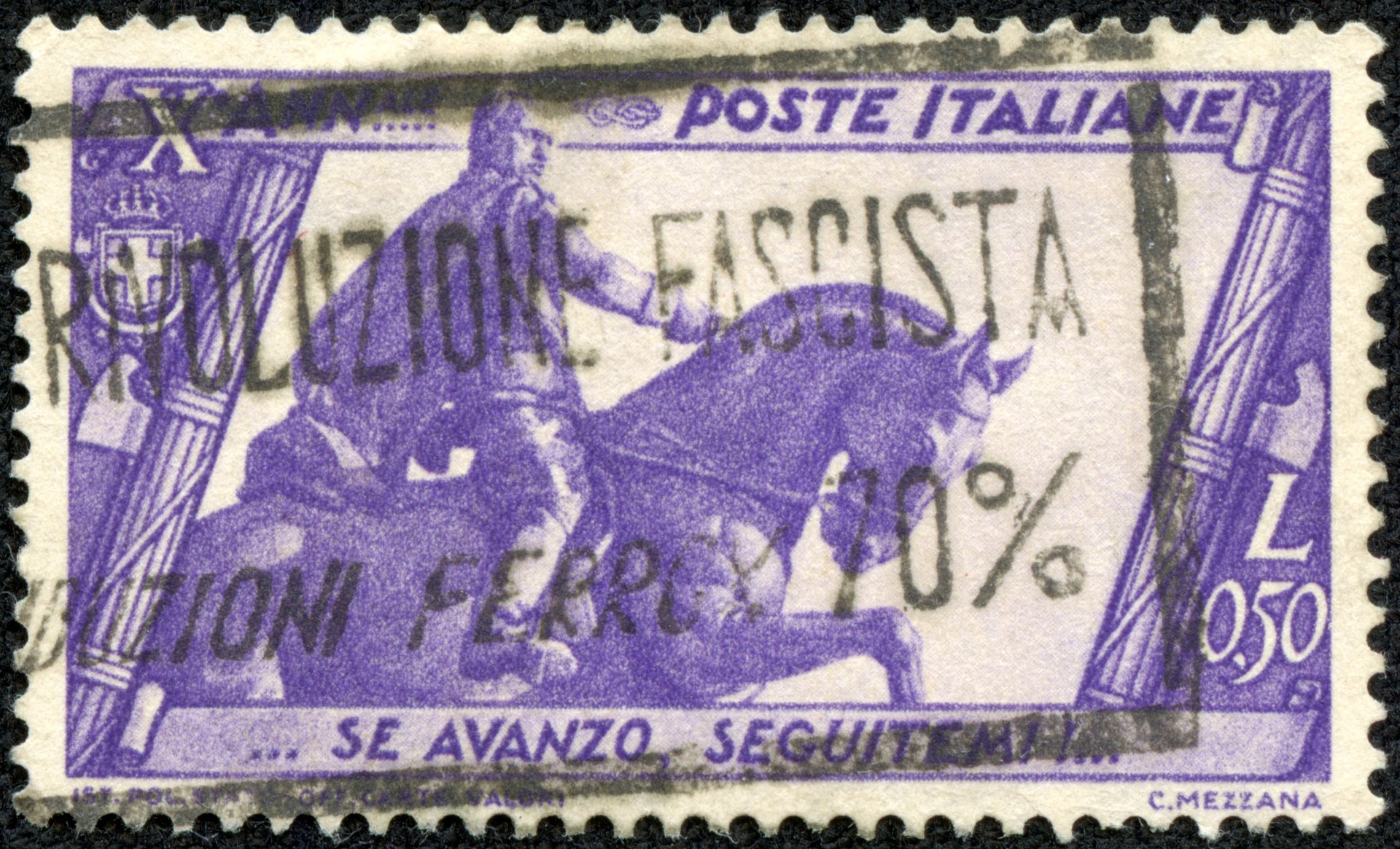 With the rise of the political right in both Europe and America, the word fascism is everywhere. It’s not just everywhere in print, but shouted across college campuses by furious youth, traded as gossip in cafes, flung across the floor of the Irish Senate, and spammed almost daily at the Huffington Post.

So what does it mean? George Orwell’s own attempt to answer this question in his 1944 landmark essay "What is Fascism?” lamented the transformation of fascism as a system of government and economics into little more than a swear word. He observed that:

“You will find that there is almost no set of people- certainly no political party or organized body of any kind- which has not been denounced as Fascist during the past ten years.”

This should sound familiar. Certainly, today when you hear the word fascist, there is little to no allusion to a specific system of government or economics.

“The word Fascism has now no meaning except in so far as it signifies something not desirable.”

It's remarkable that the meaning of the term was ever in dispute. In 1944, much of the free world had declared war against the menace of fascism, yet we could not firmly say who or what was fascist. Why, then, was the task to form a definition of the term fascism so unyielding?

For the most part, the reasons were the same then as they are today: the definition of fascism is being perverted to suit just about anyone’s agenda. To this extent, Orwell writes, “The word Fascism has now no meaning except in so far as it signifies something not desirable.”

But it did, once, have a meaning. The word fascism was born from the Fascist Party, the leader of which was Benito Mussolini, who invented the word himself. Look no further than the designer of the system; Mussolini was the fascist, and his essay, the Doctrine of Fascism, lays the definition out more plainly than we could ask for. Although broad in scope, here is one excerpt:

“Anti-individualistic, the Fascist conception of life stresses the importance of the State and accepts the individual only in so far as his interests coincide with those of the State."

In the view of historian Martin Kitchen:

It should come as no surprise then, that the American progressives of the 20s and 30s were openly in favor of fascism. One of the chief architects of the New Deal—the foundation of modern liberalism—Rexford Guy Tugwell, remarked of fascism that, “It's the cleanest, neatest most efficiently operating piece of social machinery I've ever seen. It makes me envious.”

Widely admired by the radical left during that time was that the New Deal was going to be America’s very own experiment with fascism, and an attempt to reproduce Mussolini’s idea—Mussolini who had not yet acquired a brutalist reputation. John Patrick Diggins  recalls that “For the radicals of the twenties the whiff from Italy carried no foul ideological odor.”

But when these utopias began enforcing race laws, fascism was tainted to its American admirers, and harmful to their reputations. And so began the practice of cursing their political opponents (the right) with the often baseless label of "fascist."

It was a clever trick. Historian John Lukacs remarks similarly, “the overall application of ‘fascism’ to all right-wing, and strongly anti-communist parties and practices and phenomena was very useful for international communist and left-wing rhetoric and practice.”

It stands to reason that progressives today do not hate fascism, they hate conservatism.

All kinds of absurd attempts to liken the American Right to fascists were made, and have persisted to this day. Economic liberty was even deplored as fascist. Even in the face of Hitler and Mussolini’s glaring statism Leon Trotsky, the father of one of the major schools of Marxist thought wrote in 1930 that, “The germ of fascism is endemic in capitalism.” Peter Davies more comprehensively states that, “Marxist orthodoxy demands the overthrow of capitalism as the only way to rid modern society of fascism.”

Corporatism and capitalism are not at all the same thingThe marxist definition has been criticized severely by scholars of fascism, however. Davis and Lynch notice that among traditional Marxists, “there is a tendency to identify fascists and fascism in every nook and cranny."

The Comintern and such orthodoxy have mainly faded, but it is difficult to ignore the deep influence that marxism has had on the liberals of today. It comes as no surprise then, that the vestige of marxist anti-capitalism remains endemic to both European and American liberalism. According to Roger Griffin, a prolific and acclaimed chronicler of fascism, “It is self-evident that in leftist strictures fascism is simply viewed as being synonymous with capitalism.”

“We live in a democracy, after all, and is that not the very antithesis of fascism? But even democracy is not without its limitations. We may have a choice of what car to buy and what designer clothes to purchase, but we have little choice but to be a consumer.”

This is reductive, to say the least. Apparently, even freedom is fascist because it is protected, or “forced,” by the enforcement of the law. The Doctrine of Fascism, however, clarifies itself on the issue, “It is not the people who make the state but the state that makes the people,” not a sentiment I would eagerly attach to the free market.

Nor is democracy free market capitalism—a rather cursory distinction that Kulik fails to make. Let’s remember that Hitler’s Germany was an engine of national socialism, not capitalism, yet his rise was, remarkably, entirely democratic.

Mussolini Has the Last Say

What the left has been omitting from their attempts to associate capitalism with fascism is that corporatism and capitalism are not at all the same thing.

Corporations, or corporazioni, in fascist Italy, were not creations of individuals, but creations of the fascist state itself, and in all aspects were designed to be a “return to the guilds,” as Mussolini put it, and not private companies at all. The Doctrine of Fascism says similarly:

There is some amount of desperation involved when repudiating Mussolini’s own words, but there is no escaping the historical fondness progressive economists have had for fascism, nor even Mussolini’s own fondness for them:

“Fascism entirely agrees with Mr. Maynard Keynes, despite the latter's prominent position as a Liberal. In fact, Mr. Keynes' excellent little book, The End of Laissez-Faire (1926) might, so far as it goes, serve as a useful introduction to fascist economics. There is scarcely anything to object to in it and there is much to applaud.”

Leftists who are not so focused on economics (your average accuser) simply have a tendency to conflate America’s right, or La Pen’s National Front, or even British conservatives, with what was once, in 1933, known as “the right," simply because they bear the same moniker. This is an illusory correlation akin to thinking today’s liberals have something in common with the classical liberals of early America; they are alike only in name.

In other words, fascism shares an extricable relationship with statism.

And so eventually, even American republicanism becomes subject to these fallacies—something expressly focused on reducing state intervention in favor of individual liberty. Here the word really begins to lose its meaning. Such a system is nothing like the actual Fascist Party, whose founder once again sets the record straight on the matter, “It is not the people who make the state but the state that makes the people." That is the totalitarian strain of fascism.

Hitler disagrees, declaring that, “For us, the idea of the Volk is higher than the ideas of the state,” and in 1938: "In the beginning was the Volk, and only then came the Reich.” This is the authoritarian strain.

In other words, fascism shares an extricable relationship with statism, or collectivism— the obverse of individualism. It is regrettable then that the word continues to be ascribed to ardent opposers of fascist systems, namely American Republicans. With a little digging, we find its true form, and there is little similarity between it and the American right.

Trevor Chase is an undergraduate biology student and a freelance writer.