Despite the insistence that they're all about helping the disadvantaged, progressive policy has the actual effect of creating a place where only the rich can afford to live.

The San Francisco Bay Area is a booming locale, and certainly one of the most naturally beautiful. It should be a fantastically desirable place to live.

Yet, according to a recent poll, nearly half of San Francisco residents say they want to leave the Bay Area entirely.

A study from the Bay Area Council, a public policy organization, found that 46 percent of San Francisco residents have plans to move out of the area, a jump of 12 percent since 2016. Of those who participated in the survey, 61 percent said they planned to leave the state, with Texas being a primary destination.

Why Leave the Bay Area?

There are certainly many reasons for leaving the Bay Area. Rising crime rates and lawlessness, as well as worsening sanitation, are among them.

San Francisco’s homelessness problem is becoming, at this point, a national embarrassment. 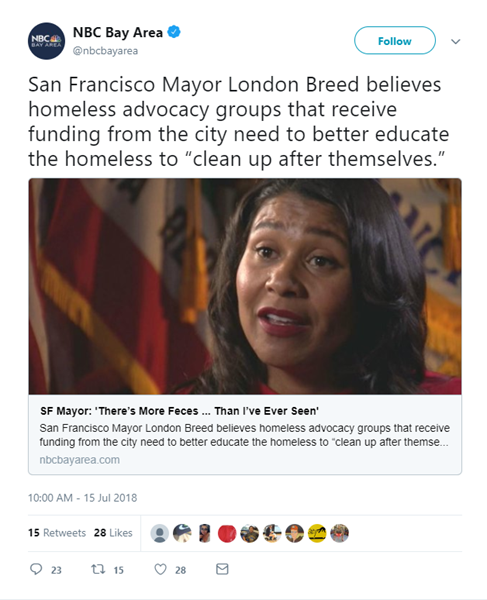 But the top reason for wanting to leave San Francisco, according to the poll, is the cost of housing. As jobs have flowed into the Bay Area, the cost of living has become astronomical.

“Despite the fact that many of the homes and apartments are small and located close together, San Francisco now has the highest rent in the world,” wrote Rachel Alexander in Townhall. “The average monthly rent is $3,500. A median-priced home sells for $1.5 million, but only a paltry 12 percent of residents can afford this.”

Why Is Housing so Expensive?

The explosive housing costs can’t just be excused as simply the product of a growing economy and urban environment. Other thriving cities such as Nashville and Atlanta are also doing well without the surge in housing costs.

Some have argued that high housing costs are simply due to the natural geographic constraints of older cities.

So why is housing in San Francisco particularly out of control? Politics.

However, as urban expert Scott Beyer wrote in Forbes, it’s a faulty argument.

“There is much raw, developable land north and south of the city, as well as east of San Francisco and the East Bay cities of Oakland and Berkeley. According to a San Jose Mercury News report, 75 percent of the Bay Area is open space,” Beyer wrote.

“Given these facts, to complain about the region’s geographical constraints is frankly ludicrous,” Beyer wrote. “San Francisco is little different than Atlanta, Houston, or Dallas in the amount of housing development it could theoretically handle.”

So why is housing in San Francisco particularly out of control? Politics.

There is actually plenty of space to grow in the Bay Area, but for over a generation, San Francisco specifically has pursued “no growth” policies, deeply restricting the building that can take place in the city.

This parallels a philosophy that took hold around the state, where no-growth policies combined with draconian environmental restrictions—such as the California Environmental Quality Act passed in the 1970s—made new building impossible or prohibitively expensive.

When the economy boomed over the last decade in the wake of the tech surge, the pressure on the housing market became extreme—especially in San Francisco.

A CityLab article from 2015 explained:

When San Francisco should have been building at least 5,000 new housing units a year to deal with the growing demand to live here, it instead averaged only about 1,500 a year over the course of several decades. In a world where we have the ability to control the supply of housing locally, but people still have the freedom to move where they want, all of this has played out in predictable ways.

Progressive Policies Price Out Those They Claim to Help

Ironically, a city deeply committed to progressive values has become a place where only the super-rich can thrive.

A report from Paragon Real Estate earlier this year showed that the “household income now required to buy a median-priced home in San Francisco reached an all-time high of $303,000 in December.”

These prices are a stretch even for those working in the tech industry; they are becoming impossible to overcome for nearly everyone else.

San Francisco is a microcosm of California’s larger problems.

Remarkably, California has the highest poverty rate of any state and the lowest rating for “quality of life.”

While the state is riding high due to a surging national economy and enormous growth in the tech industry, this success masks fundamental problems below the surface that are doing damage to the Golden State.

Remarkably, California has the highest poverty rate of any state and the lowest rating for “quality of life.”

San Francisco and the state of California have touted their welcoming attitude, embracing sanctuary city policies to shield immigrants who have entered the country illegally.

Increasingly, though, these newcomers, like everyone else, will find it nearly impossible to reach the middle-class lifestyle that California became famous for in the 20th century.

San Francisco is in no danger of collapse anytime soon, but it’s important to remember that a half-century ago, Detroit was one of the great cities of the world and the heart of the American economy.

Now Detroit is a sad tale of decline and dysfunction.

San Francisco’s natural beauty and appealing climate will likely prevent such a steep fall. The fact that people are desperate to leave at the first opportunity, though, is certainly a canary in the coal mine.