Hillary, It Takes a Village, Not a State 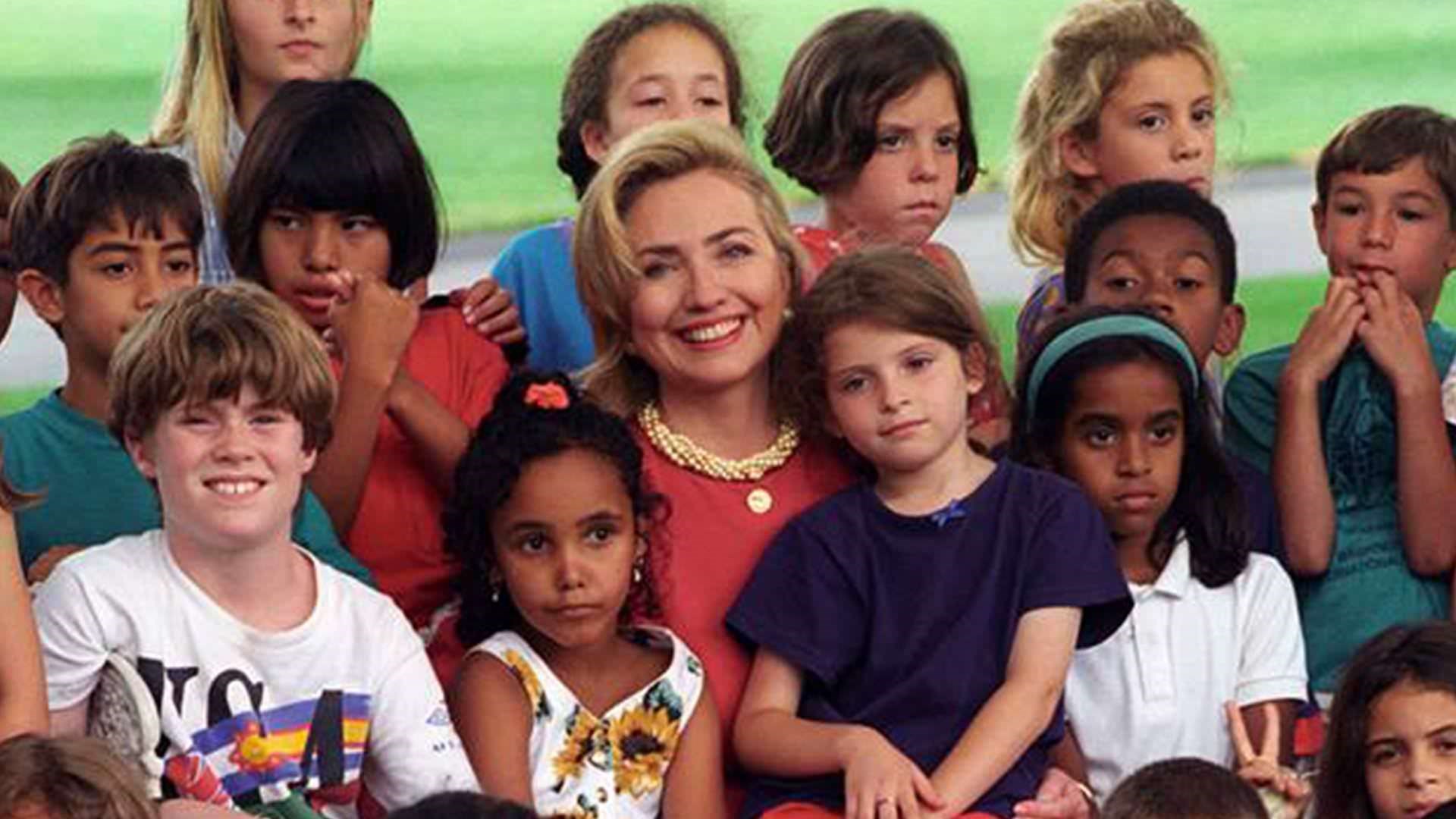 In a rare moment of candor during the primaries, Hillary Clinton saw fit to remind us of an adage long popular among politicians, “You campaign in poetry, you govern in prose,” as though she was imparting some straightforward, benign wisdom about democracy. But to the keen ear, this motto is hardly forthright or innocuous; it actually reveals a major flaw running throughout Hillary’s public musings.

We personally rely on poetic lies to help us face the difficult truths of our lives, but politicians use campaign poetry to avoid  telling the truth to voters.

Whenever she is speaking, even in moments of attempted sincerity, Hillary Clinton seems unable to escape her dependence on euphemism.

The very phrase “you campaign in poetry” is a euphemism of euphemisms – a whitewashed way of saying a naughty truth – that politicians weave lies dressed up in hopeful and beautiful metaphors as a means to potpourri their ambitions for power. As Mencken reminds us, “The aim of poetry is to give a high and voluptuous plausibility to what is palpably untrue.” Although each of us may personally rely on poetic lies to help us face the difficult truths of our lives, politicians use campaign poetry to avoid facing the difficulty of telling the truth to voters.

Hillary Clinton is the epitome of this rule. She has a severe case of the poetics: one so bad that she actually believes her euphemisms. Given her several decades in the public eye, it is certainly a possibility that her personal truths have merged with her public poetry. For instance, as much as Hillary has “evolved” on policy over her many years in politics, she has remained consistent in her reliance on the proverb, “It takes a village to raise a child.” Nearly 20 years after the release of her 1996 book It Takes a Village, Clinton criticized Republicans in her campaign launch speech for the 2016 election cycle, saying, “Fundamentally, they reject what it takes to build an inclusive economy. It takes an inclusive society. What I once called ‘a village’ that has a place for everyone.”

Hillary Clinton has, indeed, become a woman of destiny, but not how she or the short-sighted watchers of American politics may think.

I understand why Clinton would say this. Who doesn’t want to live in an inclusive “village” where neighbors look out for one another?  So, I agree in a way: it does take a village to raise a child – if by “village” we mean an actual village, a local community built upon a positive peace, respect for human rights, and voluntary consent. Of course, children learn from more than just their parents. Every person a child meets is a potential teacher, whether they be professional teachers, lawyers, doctors, employers, friends, or extended family. Often forgotten, children are also great at teaching themselves through experience first-hand, making up their own minds. Both villages and children need the liberty to develop in their own way, free from the heavy hand of authority.

But, this isn’t the “village” Hillary Clinton has in mind. No, she extends the metaphor too far, carrying us into the land of dishonest euphemism. Her appeal to the folksy wisdom of the “village” is merely a means to obscure what’s really on the agenda – one that goes far beyond the purview of our local villages, townships, cities, and even our childhoods. In Hillary Clinton’s mind, a diverse nation of 300 million-plus people, a nation of nearly 20,000 actual cities, can be managed like a single village where childhood never ends. If only we surrender more of our liberties and governing decisions to Washington, DC, Hillary thinks, “the children” of the United States can be prodded to live up to their God-given potential with her fulfilling destiny as President.

Hillary Clinton has, indeed, become a woman of destiny, but not how she or the short-sighted watchers of American politics may think. No, her political agenda is helping to fulfill two secular prophecies that go beyond the scope of partisan politics – the first given by a famous French aristocrat, the second by a mustachioed man born posthumously.

An Immense and Tutelary Power

In 1840, the second volume of Alexis de Tocqueville’s Democracy in America was published. In the chapter What Sort of Despotism Democratic Nations Have to Fear, Tocqueville muses on the future of democratic societies and their potential for tyranny. After dispensing with the idea that democratic despotism will look anything like that of the ancients, Tocqueville ventures a picture of the future whereby a nation of isolated men, in pursuit of self-interest, are close to their fellow citizens without seeing them, touching one another without any real sense of feeling.

Above this race of men stands an immense and tutelary power, which takes upon itself alone to secure their gratifications and to watch over their fate. That power is absolute, minute, regular, provident, and mild. It would be like the authority of a parent if, like that authority, its object was to prepare men for manhood; but it seeks, on the contrary, to keep them in perpetual childhood: it is well content that the people should rejoice, provided they think of nothing but rejoicing. For their happiness such a government willingly labors, but it chooses to be the sole agent and the only arbiter of that happiness; it provides for their security, foresees and supplies their necessities, facilitates their pleasures, manages their principal concerns, directs their industry, regulates the descent of property, and subdivides their inheritances: what remains, but to spare them all the care of thinking and all the trouble of living?

Thus it every day renders the exercise of the free agency of man less useful and less frequent; it circumscribes the will within a narrower range and gradually robs a man of all the uses of himself. The principle of equality has prepared men for these things; it has predisposed men to endure them and often to look on them as benefits.

After having thus successively taken each member of the community in its powerful grasp and fashioned him at will, the supreme power then extends its arm over the whole community. It covers the surface of society with a network of small complicated rules, minute and uniform, through which the most original minds and the most energetic characters cannot penetrate, to rise above the crowd. The will of man is not shattered, but softened, bent, and guided; men are seldom forced by it to act, but they are constantly restrained from acting. Such a power does not destroy, but it prevents existence; it does not tyrannize, but it compresses, enervates, extinguishes, and stupefies a people, till each nation is reduced to nothing better than a flock of timid and industrious animals, of which the government is the shepherd.

And there you have it: a portrait of what Hillary Clinton and her horde fancies the American “village” whereby she as President will shepherd the people through their perpetual childhood, sparing them as best as she can “all the care of thinking and all the trouble of living.” Let me be clear, the program Hillary Clinton advanced in It Takes a Village is very much the program she hopes to advance as President. Whether it be more mandates or subsidies, gun control restrictions or minimum wage increases, universal health care expansion or education mandates, domestic surveillance at home or wars for democracy abroad, Hillary Clinton hopes to further foster the “supreme authority” Tocqueville foresaw nearly two centuries ago.

This brings us to our second prophecy.

As Friedrich Nietzsche put forth in his own prophetic poetry in the late 19th century:

A state, is called the coldest of all cold monsters. Coldly lieth it also; and this lie creepeth from its mouth: "I, the state, am the people."

It is a lie! Creators were they who created peoples, and hung a faith and a love over them: thus they served life.

Destroyers, are they who lay snares for many, and call it the state: they hang a sword and a hundred cravings over them.

Where there is still a people, there the state is not understood, but hated as the evil eye, and as sin against laws and customs.

How clever of Hillary to carry a white flag as her battle banner!

To Hillary Clinton and her ilk, in order to be our brother’s keepers in the American village, we must look to “our” big brother Washington to keep us in equal dependency. Hillary’s “village” metaphor is merely another way of saying “we” are the government, and, accordingly, she continues to claim that her election to the Presidency is the only way to bring about “unity” for the nation. She has lately taken up the slogan “Stronger Together” on the campaign trail as a means of somehow distinguishing herself from Donald Trump, but I do not see much of a distinction. For all her “inclusive” language, she is the first person to single people out in the herd for censure if they oppose her quest for power. “I am a unifier, and you are a divider,” she divisively scolds her political opponents.

How clever of Hillary to carry a white flag as her battle banner! How bold of her to take up the sword of government in the name of peace!

Obviously, Hillary Clinton does not speak for the whole nation. Obviously, her election to the Presidency will be viewed as an awful thing by nearly half of the American people. For Hillary Clinton to suggest she can unify the nation with her election, shows she does not understand or is lying about the current state and stakes of American politics. Given the amount of power up for grabs in Washington, all this election will achieve is further division. Presidential elections are now nearly zero-sum games wherein the actual people across America’s diverse villages are reduced down to votes for team A or B and forced to impose “their” will upon one another through the power of the federal government. No wonder the American people are in such a rude mood this election cycle; they are essentially being held hostage by the power of “their” mass democracy.

However, there is another way.

If Hillary Clinton truly believes it takes a village to raise a child, she will give power and liberty back to the villages of the United States. If Hillary Clinton genuinely wants to unify the nation, she will use her vaunted ability to listen to heed these warnings of the past. If Hillary Clinton honestly considers herself a champion of American democracy, she would be wise to remember that the democracy in America Tocqueville once praised was local, voluntary, and infused with the spirit of religion, or hope, in the village to manage its own affairs.

But, I fear she will not give power back to the villages. She will not listen to the warnings of the past. She will not champion American democracy as it once was.

No, her poetry has gotten the better of her, so I expect she will continue to “hang a sword and hundred cravings” over the people of the United States, proudly proclaiming. “I, the state, am the village!”