Here's the Thing about Those Political Orientation Quizzes

Does liking arugula really make me a leftist?

I realize that such exercises are probably “click-bait,” but I generally can’t resist taking tests/quizzes designed to identify my philosophical/political orientation.

Here are some previous examples, all of which made sense.

But there was also a political quiz that pegged me as a “moderate,” which might be reasonable conclusion since libertarians have some right-wing views and some left-wing views. But that quiz also concluded that I had “few strong opinions,” which is a nonsensical result.

But maybe I really am a moderate because there’s a new 20-question quiz from IDRlabs and – as you can see – I’m exactly in the middle. 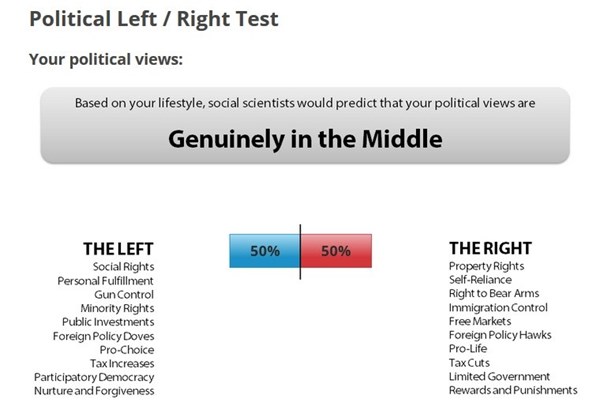 What makes this quiz interesting (or bizarre, depending on your outlook) is that none of the questions are about issues. Instead, you’re asked about lifestyle. Such as:

For what it’s worth, I think the quiz does capture something important. There is research indicating that people’s policy views are largely determined by underlying values.

And these values are more important than economics. Coming from a leftist perspective, Thomas Frank wrote What’s the Matter with Kansas last decade to address the supposed paradox of people with modest incomes voting for conservative politicians. And Thomas Edsall, also coming from the left, observed in the New York Times that wealthy people have become Democrats.

So much for Marx’s theory of economic determinism!

But how do you convince people about issues if their views are dependent on an underlying value system?

And it gets more complicated because of what’s happening in society.

I’ll share a couple of items that struck me as important. First, here’s some of what Peggy Noonan wrote in the Wall Street Journal:

There are the protected and the unprotected. The protected make public policy. The unprotected live in it. …The protected are the accomplished, the secure, the successful—those who have power or access to it. They are protected from much of the roughness of the world. …They are figures in government, politics and media. They live in nice neighborhoods, safe ones. Their families function, their kids go to good schools, they’ve got some money. All of these things tend to isolate them, or provide buffers. …They’re insulated from many of the effects of their own decisions. …This is a terrible feature of our age—that we are governed by protected people who don’t seem to care that much about their unprotected fellow citizens.

And here’s a video featuring David Goodhart of London’s Policy Exchange, who says that the split is now between the “anywheres” who are cosmopolitan and the “somewheres” who are traditional.

Incidentally, this worries me because elites have a disproportionate influence on public policy, and there’s now cultural pressure for such people to adopt left-wing views (a good example is the condescending tone of this Washington Post column). Simply stated, most educated people want to be seen as urbane and cosmopolitan, characteristics that are now associated with the left.

And it goes without saying that Trump is probably accelerating this process — which is doubly frustrating to me because his occasional support for good policy doesn’t change the fact that he’s not a supporter of free markets and limited government. Yet because he is now an avatar for the right, many educated people will decide they should support statist policies and candidates.

The bottom line is that being an advocate for liberty is becoming an even bigger challenge!

P.P.S. By contrast, I thought the quiz on supposed libertarian hypocrisy was largely a straw-man exercise.