Hayek’s thinking represents a danger to all those who have great ideas for the enlistment of the masses in their great plans for authentic existence. 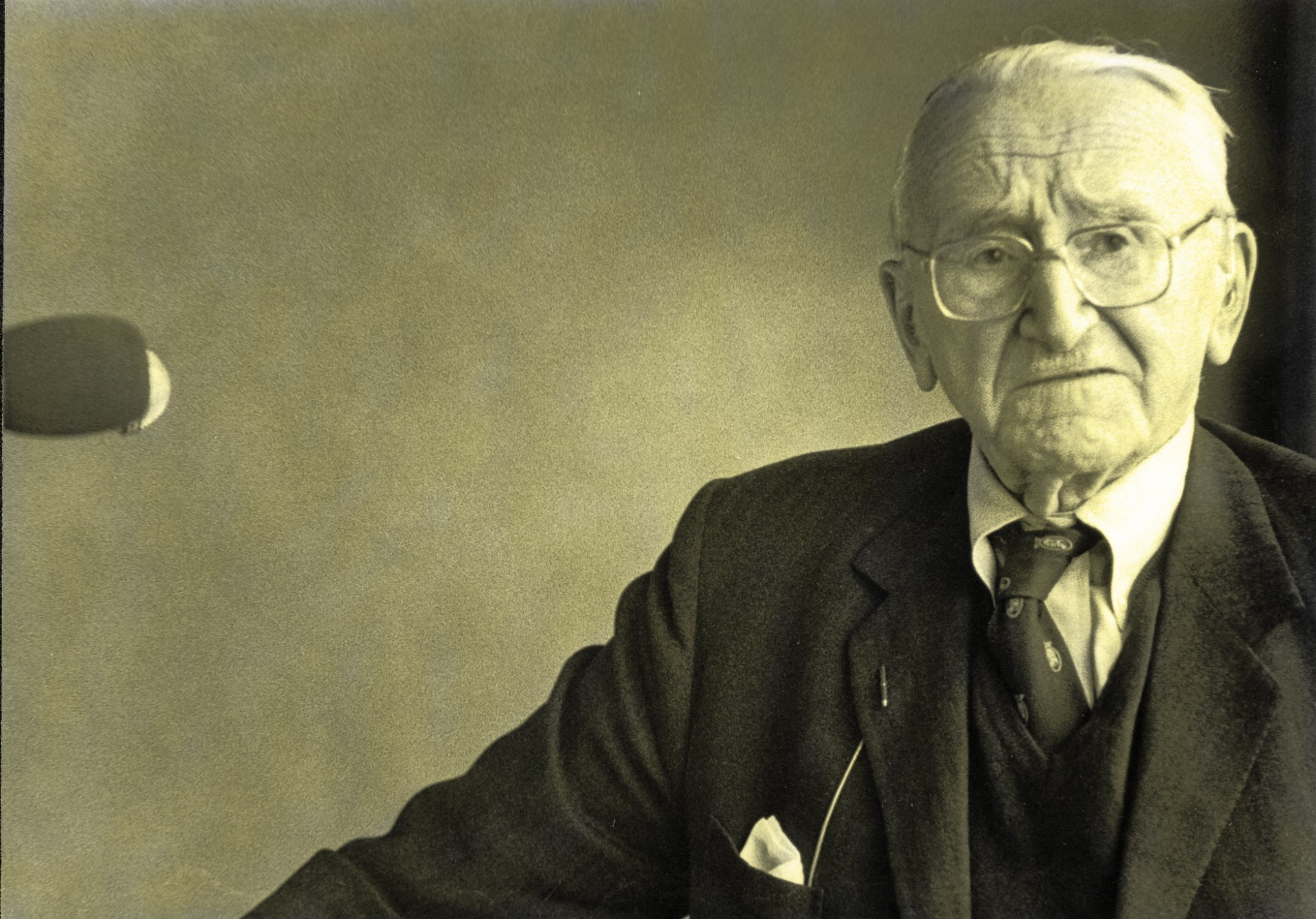 The third dangerous philosopher is very dangerous. He is dangerous to the plans of those inspired by the first two. He knew the writings of Heidegger, Schmitt, and Jünger, and he combatted their influence consistently while acknowledging, certainly in the case of Schmitt, their intellectual power. (I would add that I consider Schmitt’s The Concept of the Political one of the most intelligent attacks on libertarian ideas ever written.)

That thinker, who stood for the worth, dignity, and freedom of the individual human being, who defended the rationality of the market economy, who stood for peace when others raged for war, for reconciliation while others thirsted for revenge, was F. A. Hayek.

I find him an inspiration in almost every way. Many years ago, when I was a much younger man, I heard him speak on a number of occasions. On one, he had outlined the thinking that was to take form in his final, and not entirely completed, work, The Fatal Conceit. An audience member posed a question and Hayek responded in his Austrian/British accented voice that he presumed from the form of the question that the questioner believed X. The questioner affirmed that to be the case and Hayek’s response was memorable: “I also was of that opinion for about fifty years, but I have been thinking about it a great deal lately and I believe that it was a fundamental mistake.” (Incidentally, Hayek’s re-thinking of some fundamental questions is currently being taken up in psychology and neuroscience; he was on the cutting edge of thinking through difficult issues in our understanding of the self, but I digress.)

Hayek’s thinking, which is vast and sprawling and a joy to explore, represents a danger to all those who have great ideas for the remaking of society, for the enlistment of the masses in their great plans for authentic existence. Hayek’s individualism was not like Ayn Rand’s, which some have accused (perhaps very unfairly) of shading into a philosophy of superhuman power and thus of rule by the able over the rest of us, but is radically different: it is rooted in the limitations of human reason and the importance of evolved institutions of social cooperation.

Hayek's thinking represents a danger to all those who have great ideas for the remaking of society.Hayek’s individualism is not wedded to the idea of man “as a highly rational and intelligent” being, but instead sees the human being “as a very irrational and fallible being, whose individual errors are corrected only in the course of a social process …”1 Each individual is limited in the knowledge on which he or she may draw. There is no mind to whom all of the relevant information is available; among limited and fallible human beings, institutions have emerged by which individuals may share information without even being aware of the existence of those with whom they are interacting. For example, some of Hayek’s most important work in economics focuses on the role that prices play in providing encapsulated forms of information that help millions or billions of people who share different interests and are generally unaware of each other to coordinate their actions.2

Hayek focused on the evolved rules by which human beings coordinate their actions without relying on an omniscient central planning authority; he associated “true individualism” not with superhuman resolve, strength, intellect, or powers – characteristics that might suggest that coherent social planning by an intelligent, capable, and informed elite would be possible – but with humility and a recognition of the limits of individual minds.3

Hayek considered the key insight of enlightened classical liberal thinkers to be the importance of limiting the damage individuals could do and deflating their ambitions to impose their self-proclaimed genius on society:

It would scarcely be too much to claim that the main merit of the individualism which he [Adam Smith] and his contemporaries advocated is that it is a system under which bad men can do least harm. It is a social system which does not depend for its functioning on our finding good men for running it, or on all men becoming better than they now are, but which makes use of men in all their given variety and complexity, sometimes good and sometimes bad, sometimes intelligent and more often stupid.4

Unlike Heidegger, who saw human destiny as merely projecting possibilities from our historical thrownness and thus as being inevitably collective destinies determined by our historical past, Hayek saw a world that held opportunities, novelty, discovery, surprise, and enterprise. Rather than a world of embracing our destiny or fate, it is a world of learning. As Hayek concluded the third volume of his book Law, Legislation, and Liberty,

Man is not and never will be the master of his fate: his very reason always progresses by leading him into the unknown and unforeseen where he learns new things.

Hayek is dangerous to the plans of totalitarian thinkers, as well as to the petty tyrants who believe that they can plan the lives of everyone else better than people can plan their own lives. Heidegger and Schmitt, on the other hand, are dangerous to humanity. Although Heidegger is the most overrated philosopher of the 20th century, there is value in reading him, as well as in reading Schmitt and Jünger, but primarily only to see the gleaming Autobahn they built, which led to conflict and death. Hayek, on the other hand, provides a better map to understand the modest and meandering path of liberty.

This is an excerpt from a speech delivered at the 2016 FreedomFest.
Parts 1 and 2 can be found here and here.

[3] “From the awareness of the limitations of individual knowledge and from the fact that no person or small group of persons can know all that is known to somebody, individualism also derives its main practical conclusion: its demand for a strict limitation of all coercive or exclusive power. Its opposition, however, is directed only against the use of coercion to bring about organization or association, and not against association as such. Far from being opposed to voluntary association, the case of the individualist rests, on the contrary, on the contention that much of what in the opinion of many can be brought about only by conscious direction, can be better achieved by the voluntary and spontaneous collaboration of individuals.” F. A. Hayek, “Individualism: True and False,” p. 16.

[4] F. A. Hayek, “Individualism: True and False,” p. 12. James Madison argued against reliance on “enlightened statesmen” in the design of institutions, “It is in vain to say, that enlightened statesmen will be able to adjust these clashing interests, and render them all subservient to the public good. Enlightened statesmen will not always be at the helm: nor, in many cases, can such an adjustment be made at all, without taking into view indirect and remote considerations, which will rarely prevail over the immediate interest which one party may find in disregarding the rights of another, or the good of the whole.” “Federalist Number 10,” The Federalist: The Gideon Edition, by Alexander Hamilton, John Jay, and James Madison (Indianapolis: Liberty Fund, 2001), p. 45.

Dr. Palmer is executive vice president for international programs at the Atlas Network and a senior fellow at the Cato Institute and director of the Institute's educational program, Cato University.