Government Shutdown Shows Why We Should Decentralize National Parks

As tourist attractions, and as giant recreational areas for locals, public lands are quite valuable as indirect sources of revenue for both private and government sector institutions in the area. 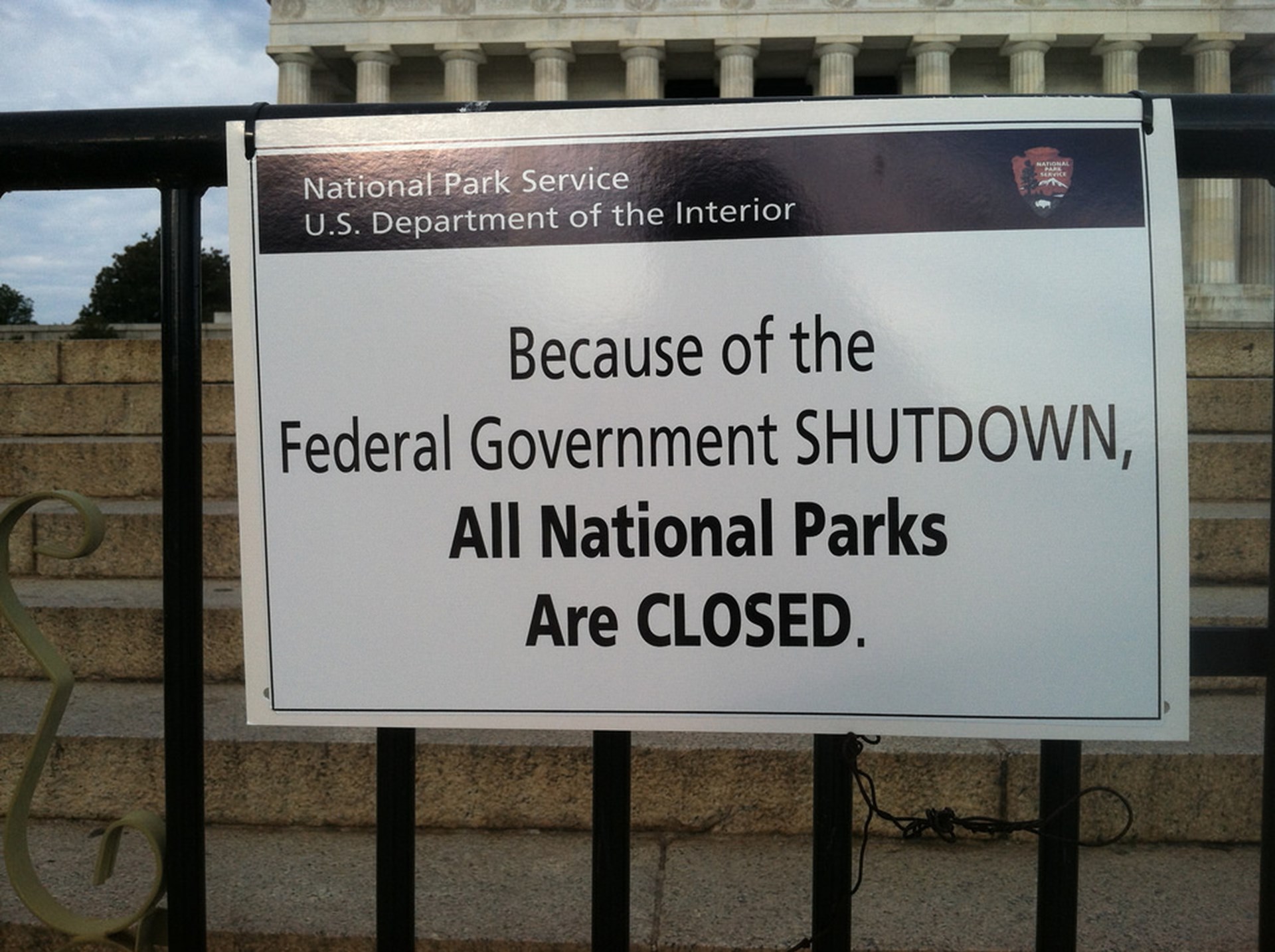 The federal government is in the midst of a partial "shutdown." Don't worry, there's still plenty of money flowing to a great many government departments. And even those workers who experience deferred salaries during the shutdown will almost certainly get their back pay paid in full.

But as always occurs during these so-called shutdowns, many of the most popular amenities offered by the federal government are being shut down. This includes national parks like Yosemite and Rocky Mountain National Park.

Back during the 2013 shutdown, under the Obama administration, the federal government took an especially punitive position. The administration sent armed government agents to shut down the parks. It sent in extra staff to erect barriers around some monuments—monuments funded by private trusts—such as the World War II memorial in Washington, DC.

This time, the feds are being a little bit more laissez-faire about it.

Rather than sending armed guards barking threats and orders at visiting taxpayers, the administration is simply closing down services. Most of these "services" of course, won't be missed by most people. But when the government closes off all the bathrooms and outhouses, things can start to get messy.

And apparently, this is what's happening at parks such as Joshua Tree National Park, where the land along the roads is in danger of becoming one big outdoor latrine.

Some volunteers have attempted to address the issues:

Once those port-a-potties fill up there's no amount of cleaning that will save them," said Sabra Purdy, who along with her husband, Seth, owns the rock-climbing guide service Cliffhanger Guides in the town of Joshua Tree.

The 40-year-old Purdy is among dozens of volunteers who have been collecting garbage, cleaning bathrooms and generally keep an eye on the park. Local business owners and park supporters are donating toiletries and cleaning supplies.

"People are doing it because we love this place and we know how trashed it'll get if we don't," she said.

It doesn't have to be this way.

Contrary to the myth that public lands would immediately be sold to rapacious developers and oil drillers if they were to fall into the hands of state or local governments, the reality is that public lands such as those in national parks are usually viewed very favorably by surrounding communities and by the voters in the states where they are located.

As tourist attractions, and as giant recreational areas for locals, public lands are quite valuable as indirect sources of revenue for both private and government sector institutions in the area.

At the local level, access to local tourist attractions could mean a restaurant's ability to pay its staff with income from tourists.

The federal government, on the other hand, has no skin in the game when it comes to shutting down monuments and national parks thousands of miles from Capitol Hill. For the feds, it's all a political game in Washington, DC. What happens in the communities bordering federal lands—many of them rural—is but a mere afterthought to people like Nancy Pelosi. But at the local level, access to local tourist attractions could mean a restaurant's ability to pay its staff with income from tourists.

In some cases, locals have even attempted to work around federal shutdowns by paying for the parks themselves. In 2013, for example, the state of Colorado paid the Department of the Interior more than $360,000 dollars to open up Rocky Mountain National Park during that shutdown. This was only possible after an arduous process of negotiations with federal bureaucrats who could have easily vetoed the deal for any reason at all.

The Pitfalls of Centralized Power

The whole thing illustrates the danger of allowing the federal government to exercise control over vast swaths of the American landscape while minimizing the influence of those who are impacted most by federal decisions. Besides, there's certainly no justification for having an entire national system of parks dependent on Washington, DC. The very idea that access to an outhouse in rural California should depend on a backroom deal in Washington DC should strike every reasonable person as utterly absurd.

Maybe, just maybe, the use of a pit toilet in middle-of-nowhere Arizona ought to be a decision of the people who live within 500 miles of it.

Maybe, just maybe, the use of a pit toilet in middle-of-nowhere Arizona ought to be a decision of the people who live within 500 miles of it.

But how to pay for it?

Well, there's an easy way to deal with that, too. If a "shutdown" is going to cut off the usual subsidies for a national park, then let the park collect a fee that covers the full cost of operation. After all, national parks already charge far too little for entry because they are subsidized by federal tax revenue. This means even people who have never set foot in a park pay so that the park's visitors can use the park's amenities at subsidized prices.

This also means that when things don't go as planned—i.e., when DC politicians don't rubber stamp all the usual paperwork in time—then everything closes down. Sometimes private businesses within the parks are forced to shut down, too.

Were the parks allowed to operate without subsidies, of course, we all know what would happen. Countless articles would be published at The Atlantic and Salon about how the national parks are now just for "the one percenters." When a fee increase was proposed in 2017, we were told an increase would "threaten access to nature." But at the same time, we're told to rend our garments over the fact that infrastructure in the parks is underfunded. In the end, it turns out, we're told that yet another tax increase and more government spending will fix everything. But don't you dare think about charging the actual users a fee that covers costs!

At the moment, though, all of this is moot since the feds can't get their act together enough to even empty a few dumpsters. Remember this the next time we're told that state or local governments—or even private conservation trusts—could never, ever be trusted with the delicate business of managing some rural lands.