Government Does Not Belong in Our Showers

First they came for our toilets, then our light bulbs, now our showers.

When I write about regulation, I usually focus on big-picture issues involving economic costs, living standards, and competitiveness.

Those are very important concerns, but the average person in American probably gets more irked by rules that impact the quality of life. 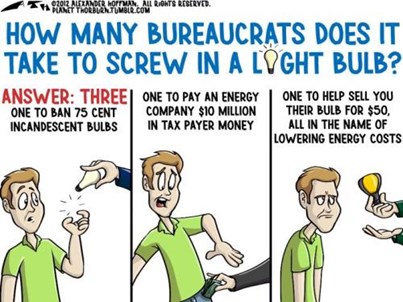 That’s a grim list, but it’s time to augment it.

Jeffrey Tucker of the Foundation for Economic Education explains that the government also has made showering a less pleasant experience. He starts by expressing envy about Brazilian showers.

…was shocked with delight at the shower in Brazil. …step into the shower and you have a glorious capitalist experience. Hot water, really hot, pours down on you like a mighty and unending waterfall… At least the socialists in Brazil knew better than to destroy such an essential of civilized life.

I know what he’s talking about.

I’m in a hotel (not in Brazil), and my shower this morning was a tedious experience because the water flow was so anemic.

Why would a hotel not want customers to have an enjoyable and quick shower?

The answer is government.

…here we’ve forgotten. We have long lived with regulated showers, plugged up with a stopper imposed by government controls imposed in 1992. There was no public announcement. It just happened gradually. After a few years, you couldn’t buy a decent shower head. They called it a flow restrictor and said it would increase efficiency. By efficiency, the government means “doesn’t work as well as it used to.” …You can see the evidence of the bureaucrat in your shower if you pull off the showerhead and look inside. It has all this complicated stuff inside, whereas it should just be an open hole, you know, so the water could get through. The flow stopper is mandated by the federal government.

It’s not just about the showerhead. The water pressure in our homes and apartments has been gradually getting worse for two decades, thanks to EPA mandates on state and local governments. This has meant that even with a good showerhead, the shower is not as good as it might be. It also means that less water is running through our pipes, causing lines to clog and homes to stink just slightly like the sewer. This problem is much more difficult to fix, especially because plumbers are forbidden by law from hacking your water pressure.

So why are politicians and bureaucrats imposing these rules?

Ostensibly for purposes of conservation.

…what about the need to conserve water? Well, the Department of the Interior says that domestic water use, which includes even the water you use on your lawn and flower beds, constitutes a mere 2% of the total, so this unrelenting misery spread by government regulations makes hardly a dent in the whole. In any case, what is the point of some vague sense of “conserving” when the whole purpose of modern appliances and indoor plumbing is to improve our lives and sanitation? (Free societies have a method for knowing how much of something to use or not use; it is called the signaling system of prices.) 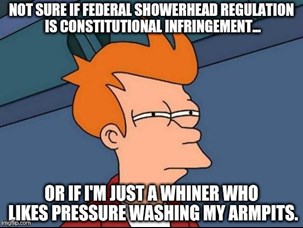 Jeffrey is right. If there really is a water shortage (as there sometimes is in parts of the country and world), then prices are the best way of encouraging conservation.

Now let’s dig in the archives of the Wall Street Journal for a 2010 column on the showerhead issue.

Apparently bureaucrats are irked that builders and consumers used multiple showerheads to boost the quality of their daily showers.

Regulators are going after some of the luxury shower fixtures that took off in the housing boom. Many have multiple nozzles, cost thousands of dollars and emit as many as 12 gallons of water a minute. In May, the DOE stunned the plumbing-products industry when it said it would adopt a strict definition of the term “showerhead”…

A 1992 federal law says a showerhead can deliver no more than 2.5 gallons per minute at a flowing water pressure of 80 pounds per square inch. For years, the term “showerhead” in federal regulations was understood by many manufacturers to mean a device that directs water onto a bather. Each nozzle in a shower was considered separate and in compliance if it delivered no more than the 2.5-gallon maximum.

But in May, the DOE said a “showerhead” may incorporate “one or more sprays, nozzles or openings.” Under the new interpretation, all nozzles would count as a single showerhead and be deemed noncompliant if, taken together, they exceed the 2.5 gallons-a-minute maximum.

You've Got to Be Kidding

And here’s something that’s both amusing and depressing.

The regulations are so crazy that an entrepreneur didn’t think they were real.

Altmans Products, a U.S. unit of Grupo Helvex of Mexico City, says it got a letter from the DOE in January and has stopped selling several popular models, including the Shower Rose, which delivers 12 gallons of water a minute. Pedro Mier, the firm’s vice president, says his customers “just like to feel they’re getting a lot of water.” Until getting the DOE letter, his firm didn’t know U.S. law limited showerhead water usage, Mr. Mier says. “At first, I thought it was a scam.”

Unsurprisingly, California is “leading” the way. Here are some passages from an article in the L.A. Times from almost two years ago.

The flow of water from showerheads and bathroom faucets in California will be sharply reduced under strict new limits approved Wednesday by the state Energy Commission. Current rules, established in 1994 at the federal level, allow a maximum flow of 2.5 gallons per minute from a shower head. Effective next July, the limit will fall to 2.0 gallons per minute and will be reduced again in July 2018, to 1.8 gallons, giving California the toughest standard of any U.S. state.

Though “toughest standard” is the wrong way to describe what’s happening. It’s actually the “worst shower” of any state.

P.S. I forget the quality of shower I experienced in South Korea, but I was very impressed (see postscript) by the toilet.