Taxation is the great source of everything a corrupt government can devise to the detriment of the peoples. 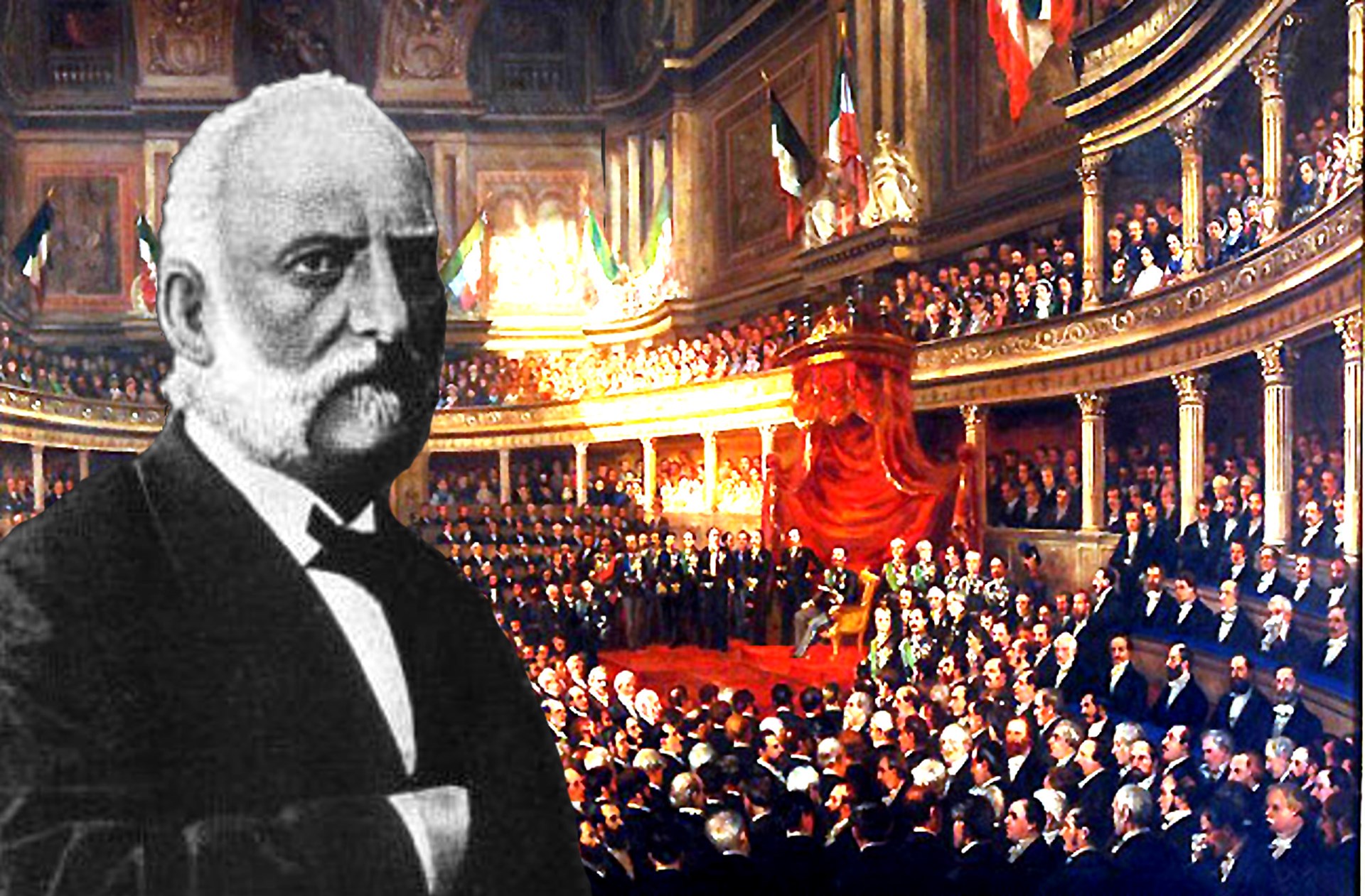 With a public debt to GDP ratio at 132% and general government spending at 51% of GDP, Italy can’t be mistaken for a beacon of classical liberalism. Things may have gone differently, had the country listened to its classical liberal economists. They had diagnosed some of the country’s most resilient problems with clarity and courage. Though often forgotten, they are still a source of inspiration. This is certainly the case of Francesco Ferrara.

Ferrara was suspended from teaching in 1857, as he frequently used his lectures to denounce the government and its policies.

Francesco Ferrara (1810–1900) was the most prominent Italian economist of the 19th century. A Sicilian, born in Palermo in 1810 of a family of modest origins, he entered the world of studies and politics as a statistician. In 1848, he took part in the Sicilian uprising. He was jailed briefly and later elected to the newly established Sicilian parliament. He was subsequently dispatched to Turin as part of a mission to offer the crown of Sicily to the Duke of Genoa, the brother of the Piedmontese king. When the House of Bourbon re-established its hold on Sicily, the envoys remained in Turin, to persist in their efforts to free Sicily. In 1852, the Bourbons condemned Ferrara to “perpetual exile” (Faucci). Later, in the unified Italy, Ferrara was briefly a cabinet minister and a member of the Italian tax court. In his forceful and prolific writings, the principles of individualism and economic liberalism were “glorified always and everywhere” (Weinberger). Commenting on Ferrara’s prose, Einaudi called him a “wizard” who “enthused thousands of mature men and ardent youths, making them fall in love with economic science”.

Ferrara was appointed to the chair in Political Economy at the University of Turin. He was widely engaged in policy debates and in 1858 was suspended from active teaching, as he frequently used his lectures to denounce the government and its policies—including the government’s monopoly in education. This prohibition to enter classrooms did not hamper Ferrara’s creativity and scholarship. He later taught in Pisa and eventually in Venice, after having served in a number of public offices.

Ferrara is best remembered for the remarkable publication series Biblioteca dell’economista, a far-reaching program of translations aimed at making the latest economic literature available to Italians. … In all, 26 books were published (two series of thirteen books each), most prefaced by a long introduction by Ferrara himself. These introductions were both biobibliographical and critical, full of insights. James M. Buchanan wrote of Ferrara’s introductions:

On the whole his criticisms are excellent by modern criteria, and he anticipated many of the neo-classical contributions. … He was forceful in his emphasis that value theory must be based on individual behavior, his whole construction departing from what he called “the economic action,” the author of such action being the individual who feels, thinks, and wants. … Ferrara was perhaps the first economist completely to shed all of the mercantilistic trappings in his rejection of economics as the science of wealth.

Not unlike the ‘Austrian’ economists, Ferrara trumpeted subjective value and was skeptical of the efforts to mathematize economics. He was critical of Ricardian economics and was heavily indebted to the French: Bastiat, who he considered a “hero and martyr in his battles for economic freedom” (Faucci), Antoine Destutt de Tracy, and especially Jean-Baptiste Say. Like Say, he based his view of the entrepreneurial function on a “knowledge-based approach” (Bini). He opposed intellectual property rights as a form of government-granted monopoly (for Ferrara, “a patent is the lottery win of industrious men”), endorsed free banking, and favored Italian unification but opposed the development of a strong, centralized Italian state. Ferrara maintained that centralization was not a price worth paying for unification: “I place my hopes in the unity of the Italian nation, but I cannot conceal that I am frightened by the centralization urges that manifest themselves everywhere whenever the Italian unification is mentioned, nor would I hesitate to proclaim that, in my opinion, a divided Italy is preferable to a centralized one.”

Besides the Biblioteca dell’economista, Ferrara engineered efforts to spread liberal ideas in Italy, including the publication of different journals in the Kingdom of Sardinia (one was called L’economista echoing the British Economist) and the establishment of the Società Adamo Smith in 1874, to bring together the intellectual devotees of free trade.

In the realm of politics, Italy moved increasingly in the opposite direction. In 1878 Italy abandoned Cavour’s free trade policies by introducing a modest tariff. In 1881, it embarked on a large program of naval construction, and in 1884 an Italian ‘industrial policy’ debuted with the creation of the Terni steel mills. In 1887, Italy got a new protectionist tariff, the second highest in Europe, for the sake of protecting not only infant industries but also agriculture. The rapid undoing of Cavour’s free trade policies is emblematic of a cause of a longstanding feature of Italian classical liberalism, namely its disenchantment with politics. It is hard to take politics seriously when the talk and conduct of political actors appear so capricious.

Ferrara was already well aware that “At the end of the day, all governments are a minority”. The downside of the representative system was that it enabled governing elites to manufacture an illusion of participation in collective choices, an illusion that greatly facilitated government spending:

The representative system is characterized by this serious flaw, that it can effortlessly become an instrument of delusion. The people is less loath to pay, when it deludes itself into believing that its taxes—as they are assented to by its representatives, whose interests are purportedly the same as its own—are for this only reason warranted by inescapable necessities. A large number of instances presented by modern history teach us how easily the good faith of peoples can be abused and reveal the covert motive that made not a few governments to reckon that, ultimately, it was in their own interest to suffer the establishment of deliberative assemblies, as a means to get rid of the odious appearance of oppressors of their own people and to enjoy the pleasure of spending large sums… When the administration has made an outlay unavoidable, majorities tend to feel obliged to allow it.

Buchanan highlights Ferrara as an important figure in starting the scienza delle finanze, the Italian tradition of public finance theory. “The ‘economic’ conception of fiscal activity was, to Ferrara, an ideal. In the actual state of the world, Ferrara considered that the levy of taxes tended to be oppressive and constituted the ‘great secret through which tyranny is organized.’ … Ferrara was intensely critical of the view, which had been expressed by German writers, that merely because tax revenues are transformed into public spending and are returned to the economy, society does not undergo a net loss” (Buchanan).

Scholars in the Italian tradition tried to develop a scientific definition of taxation, distinguishing two sorts: taxation necessary for financing for a limited government, and taxation that was essentially predatory. In its “purest meaning,” the imposta (tax) would be “the price—and a slim one—of the great benefits that the social state, the organized state offers to each of us”. Given the immense utility provided by the social state (that is: by the organization of law and order in society), such a price could be understood as something that would be paid voluntarily by each taxpayer. Since “Any tax is ultimately equivalent to a prevented consumption and a prescribed one in its stead,” and so it all boils down to the question whether “the substituted consumption is more or less productive than the prevented one”. For Ferrara, the cornerstone of the problems of taxation is the economic use of taxes, the fact that government should operate in a parsimonious way.

But if taxation can be theoretically understood as a fee, Ferrara was fully aware that historical evidence pointed in another direction:

Looking realistically at the dry facts of history, one sees taxation as the propellant of arbitrary government:

Would you like to fathom how a swarm of parasites and harlots can exist in the royal courts? Why ignorance and intrigue are exalted and knowledge and virtue are rejected and derided? How comes it that in a temperate government a bad minister can make the houses of parliament to be in thrall of his will? And representatives and newspapers can be found to conceal his faults and incompetence? Taxation contains and explains the whole riddle. Taxation is the great source of everything a corrupt government can devise to the detriment of the peoples. Taxation supports the spy, encourages the faction, dictates the content of newspapers.

This piece was excerpted and adapted from Alberto Mingardi, Classical Liberalism in Italian Economic Thought, from the Time of Unification, Econ Journal Watch 14(1), January 2017