Forget Finding Your Passion. Build It, Instead

There's no one passion sitting out there like a package sitting on a shelf, waiting to be delivered to the right owner.

Has anyone ever asked you for directions and you were too embarrassed to admit you don’t know? So much in fact, that you tried to tell them where to go regardless? Just to save your face?

That’s what most career advice feels like these days. Nobody has a clue, so everyone goes with their best guess — which is everybody else’s best guess also.

Hence, we live in a world of depressed millennials, which is permeated by two ideas:

If you’re fine with putting your life into the hands of chance, then you can stop reading right now.

Or, you can flip both of these ideas on their head.

Idea #1: Passion follows from being good at what you do, not the other way around.

The word “passion” in combination with career advice only showed up in modern business literature in the 1980s and started to really take off in the 90s, when “follow your passion,” became the go-to mantra of career advice gurus.

You don’t find passion. You build it.

By the early 2000s, authors had stopped bothering to even explain the idea and why it’s good, just assuming you’d already be familiar with it and had accepted it as the right thing to do.

This has led to an entire generation, namely our generation, the Millennials, desperately trying to figure out their passion, so that they can then choose the right career accordingly. As a result, now only one third of the U.S. workforce feels engaged at work.

In 2012, Cal Newport dedicated an entire book to debunking this myth, called So Good They Can’t Ignore You.

It argues that passion is slowly built over time, as you get better and better at your craft — it’s not a predisposed character trait that you can draw upon to pick the perfect career.

You don’t find passion. You build it.

It’s your job to choose your passion. There’s no passion set aside for you somewhere. You can’t just go somewhere and pick it up, like a package sitting on a shelf, waiting to be delivered to the right owner.

One of the key arguments he rests his case on is that passion is highly correlated with motivation, which in turn is based on three components (according to Daniel Pink’s book Drive),

Having a high level of control over your work, feeling like you know what you’re doing, and working with like-minded people to make a difference in their lives all happen to be the result of, you guessed it, being good at what you do.

So instead of fretting about what’s your passion and trying to align your career with it, you can just pick one of the many things that interests you, really dedicate yourself to it, and thus, as you get better and better, slowly build a big passion for it.

Idea #2: To be good at what you do, you have to push through the Dip, and that’s where you’re most likely to quit.

When you start learning something new, excitement and motivation run high. There’s easy stuff to learn, people encourage you, your skill level matches the challenge, and you pick up steam.

But once you’re a few weeks in, making progress gets harder. You’ve gone from beginner to intermediate, and you need a better grasp on your subject than most of your friends. None of the easy things are left to learn, so to move on, you have to practice what is difficult and uncomfortable.

You put in more effort, but you see fewer results, which of course hurts your motivation to continue to put in effort — and you really want to quit.

Welcome to The Dip. 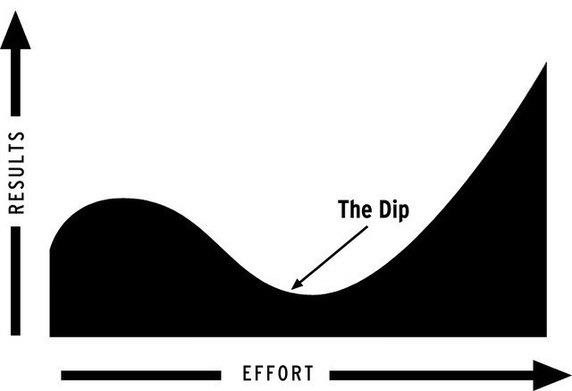 In 2007, Seth Godin published this little book that’s supposed to teach us when to quit, and when to stick with things.

The reason you seem to lose your curiosity, motivation and results all at once isn’t special. It’s not because you’re bad. It’s because you’ve reached the zone where it gets hard — the zone that separates extraordinary from average.

You’ve reached the line where most people will turn back, settle for average, and take comfort in another thing they can start to learn.

What the world has told us is that we need to be well-rounded. The world is wrong.

If the way to become passionate is getting really good at what you do, and the Dip is what separates you from being great at something, then on the other side of the Dip passion is waiting.

So once you do pick a skill you want to build, prepare for what’s to come. Be fully aware of the Dip you’re about to enter, and know that plenty of good things are waiting for you on the other side.

What if you didn’t wait for work to become fun? What if you just worked until it is?