The gargantuan expansion of the federal government undermined prosperity.

In an interview with an economic organization from India last month, I discussed many of the economic issues associated with coronavirus (fiscal fallout, excess regulation, subsidized unemployment, etc).

But I want to highlight this short clip since I had an opportunity to explain how the “New Deal” made the Great Depression deeper and longer.

For newcomers to this issue, “New Deal” is the term used to describe the various policies to expand the size and scope of the federal government adopted by President Franklin Delano Roosevelt (a.k.a., FDR) during the 1930s.

And I’ve previously cited many experts to show that his policies undermined prosperity. Indeed, one of my main complaints is that he doubled down on many of the bad policies adopted by his predecessor, Herbert Hoover.

Let’s revisit the issue today by seeing what some other scholars have written about the New Deal. Let’s start with some analysis from Robert Higgs, a highly regarded economic historian.

…as many observers claimed at the time, the New Deal did prolong the depression. …FDR and Congress, especially during the congressional sessions of 1933 and 1935, embraced interventionist policies on a wide front. With its bewildering, incoherent mass of new expenditures, taxes, subsidies, regulations, and direct government participation in productive activities, the New Deal created so much confusion, fear, uncertainty, and hostility among businessmen and investors that private investment, and hence overall private economic activity, never recovered enough to restore the high levels of production and employment enjoyed in the 1920s. …the American economy between 1930 and 1940 failed to add anything to its capital stock: net private investment for that eleven-year period totaled minus $3.1 billion. Without capital accumulation, no economy can grow. …If demagoguery were a powerful means of creating prosperity, then FDR might have lifted the country out of the depression in short order. But in 1939, ten years after its onset and six years after the commencement of the New Deal, 9.5 million persons, or 17.2 percent of the labor force, remained officially unemployed.

…let us state clearly what is at stake: did the New Deal halt the slump or did it prolong the Great Depression? …The issue that macroeconomists tend to consider is whether the rebound was fast enough to return to the trendline. …The…figure below shows the observed GDP per capita between 1929 and 1939 expressed as the ratio of what GDP per capita would have been like had it continued at the trend of growth between 1865 and 1929. On that graph, a ratio of 1 implies that actual GDP is equal to what the trend line predicts. …As can be seen, by 1939, the United States was nowhere near the trendline. …Most of the economic historians who have written on the topic agree that the recovery was weak by all standards and paled in comparison with what was observed elsewhere. …there is also a wide level of agreement that other policies lengthened the depression. The one to receive the most flak from economic historians is the National Industrial Recovery Act (NIRA). …In essence, it constituted a piece of legislation that encouraged cartelization. By definition, this would reduce output and increase prices. As such, it is often accused of having delayed recovery. …other sets of policies (such as the Agricultural Adjustment Act, the National Labor Relations Act and the National Industrial Recovery Act)…were very probably counterproductive.

Here’s one of the charts from his article, which shows that the economy never recovered lost output during the 1930s. 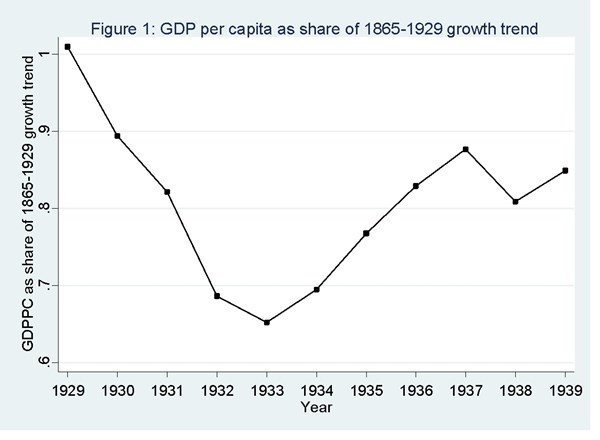 In a column for CapX, Professor Philip Booth adds some interesting evidence on how the United Kingdom adopted a smarter approach in the 1930s.

…the UK had a relatively good Great Depression by international standards. There was an extremely conservative fiscal policy (much more so than during the so-called austerity after 2008) and yet the economy bounced back. In the period 1930-1933, the average public sector deficit was just 1.1% of GDP. And there were only two years of negative GDP growth (1930 and 1931). By 1938, GDP growth had been sufficiently rapid, that the country had returned to trend national income as if the Great Depression had never happened. …In the UK, we had a stable regulatory environment, a liberalised market for land for building purposes and fiscal austerity. …though Roosevelt is often regarded as the great saviour, he is nothing of the sort. …taking the period 1929-1939 as a whole, real GDP growth was only 1% per annum. There was no return to trend national income levels. …unemployment in the US was much higher than in the UK. For the economy to be operating at those levels of unemployment for so long requires some very bad policies. …Arbitrary regulation damaged business and created “policy uncertainty” and top marginal tax rates were raised.

For what it’s worth, I also think it’s worth comparing what happened in the 1930s with the genuine economic recovery from the deep recession in 1920-21.

Or, look at how the economy boomed after World War II even though the Keynesians predicted the economy would fall back into depression without a massive expansion of domestic spending.

Nonetheless, as illustrated by this cartoon, some people still want to blame capitalism for problems caused by government. 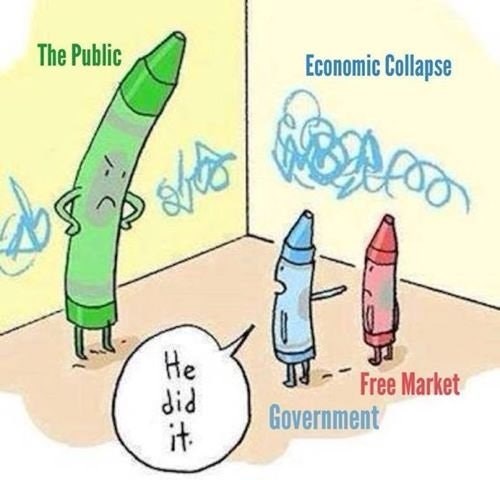 P.S. FDR not only wanted a 100-percent tax rate, he actually tried to impose it without legislative approval.

P.P.S. FDR also wanted an “Economic Bill of Rights” that would have created a far-reaching entitlements to other people’s money.

P.P.P.S. This video summarizes the awful policies of Hoover and FDR.