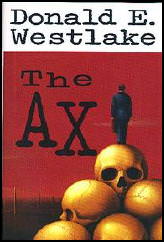 
As the economist Joseph Schumpeter famously observed, the “essential fact about capitalism” is creative destruction—the process “that incessantly revolutionizes the economic structure from within, incessantly destroying the old one, incessantly creating a new one.” In times of great economic downturn, however, it is easy to see the destruction of the old and just as easy to overlook the creation of the new.

Written during the years that followed 1987’s Black Monday crash, Donald E. Westlake’s crime novel The Ax takes on the question of creative destruction. Dark satire carries the story of a middle-aged middle manager driven to extremes by 18 months of unemployment. Having spent his post-Vietnam career in sales and management at a paper mill, Burke Devore is on the wrong side of 50 to be job hunting in an ever-tightening job market and an ever-less-prosperous industry. Fortunately, Devore is an entrepreneurial type. He responds creatively.

Devore takes an ad out in some trade journals for an imaginary job that would ideally suit him. This ad allows him to collect an enormous stack of resumes from the competition, against which to assess and rate himself.

But it is not until he reads an interview in a trade journal with Ralph Fallon, production line manager at Arcadia Processing—a paper mill that specializes in precisely the kind of polymer paper that is Devore’s particular area—that a plan begins to form. Reading about Fallon, he realizes that “‘Ralph’ Fallon had my job. I read the piece, and I read it again, and there was no doubt in my mind. He had my job, and in a fair contest I’d get it, not him. . . . I was better than him. I knew I was. It was obvious. And yet, he had my job.” The solution is obvious.

The solution is murder.

Daydream. I’d drive over to Arcadia, New York, the Luger beside me in the car. Find the mill, find Fallon . . . find him, and follow him, and wait for the opportunity, and kill him. And apply for his job. Which is where the daydream broke down, and came crashing down at my feet. . . . Of course I’m better than he is, in any contest between us for the job, it would be my job, no question. But the contest isn’t between us, and never can be. The contest, once Fallon is out of the way, is between me and that stack of resumes over there.

Realizing the nature of the problem allows Devore to pull out the six most likely competitors from the pile of resumes he has collected. He then sets out to remove the competition. With a Luger.

I realize that many Freeman readers may feel that serial murder is not a reasonable response to unemployment. But they are forgetting the standard advice given to the buggy whip makers, following Theodore Levitt in his article “Marketing Myopia.” Levitt wrote that in many industries, “The industry has its eyes so firmly on its own specific product that it does not see how it is being made obsolete. The classical example of this is the buggy whip industry. No amount of product improvement could stave off its death sentence. But had the industry defined itself as being in the transportation business rather than the buggy whip business, it might have survived.” In other words, buggy whip makers needed to understand that their job was not just making buggy whips. They needed to take a broader view. They needed to redefine themselves. And this is exactly what Devore does when he creates a whole new job opening for himself through his entrepreneurial murders.

Some readers may want to argue that The Ax contains the kind of anti-business bias of which literature is often accused. After all, the narrator is a businessman and a murderer, and he blames business for his decision to become a murderer. “What I’m doing now I was forced into, by the logic of events; the shareholders’ logic, and the executives’ logic, and the logic of the marketplace, and the logic of the workforce, and the logic of the millennium, and finally by my own logic. Show me an alternative and I’ll take it.” But it may be wise for those who want to make that argument to consider how seriously we ought to take the economic arguments made by a man who kills four people and insists, “I’m not a killer. I’m not a murderer, I never was, I don’t want to be such a thing, soulless and ruthless and empty.”

The Ax is, like the best satires, a darkly funny and deeply uncomfortable read. Killing off the competition is, of course, insanity. But Devore’s observations about job hunting in a declining industry will be grimly familiar to those who are facing today’s job market. Devore says, “Fallon is my competition, all right. And the six resumes I’ve pulled out of the stack are my competition. But this is a sea change taking place in our civilization right now, and all of middle management is my competition. A million hungry faces will be at the window soon, peering in. Well educated, middle-aged, middle class. I have to be firmly in place, before the flood becomes overwhelming.” We read. We nod slowly. And we look over our shoulders and out our windows. And we update our resumes.