Governments on the other side of the Atlantic impose much higher burdens on lower-income and middle-class taxpayers.

I argued last year that leftists should be nice to rich people because upper-income taxpayers finance the vast majority of the American welfare state according to government data. Needless to say, my comment about being “nice” was somewhat sarcastic. But I was making a serious point about the United States having a very “progressive” fiscal system. The top-20 percent basically pay for government and those in the bottom half are net recipients of that involuntary largesse.

I also pointed out a huge difference between the United States and Europe. Governments on the other side of the Atlantic impose much higher burdens on lower-income and middle-class taxpayers.

Here’s some of what I wrote:

…the big difference between the United States and Europe is not taxes on the rich. We both impose similar tax burden on high-income taxpayers, though Europeans are more likely to collect revenue from the rich with higher income tax rates and the U.S. gets a greater share of revenue from upper-income taxpayers with double taxation on interest, dividends, and capital gains (we also have a very punitive corporate tax system, though it doesn’t collect that much revenue). The real difference between America and Europe is that America has a far lower tax burden on lower- and middle-income taxpayers. Tax rates in Europe, particularly the top rate, tend to take effect at much lower levels of income. European governments all levy onerous value-added taxes that raise costs for all consumers. Payroll tax burdens in many European nations are significantly higher than in the United States.

So does this mean European politicians don’t like ordinary people?

I could make a snarky comment about the attitudes of the political elite, but I’ll resist that temptation and instead point out that taxes in Europe are much higher for the simple reason that government is much bigger and that means some segment of the population has to surrender more of its income.

But here’s the $64,000 question that we want to investigate today: Why are European governments pillaging lower-income and middle-class taxpayers instead of going after the “evil rich” and “greedy corporations”?

Part of the answer is that there aren’t enough rich people to finance big government. But the most important factor is the Laffer Curve. Politicians can impose higher tax rates on upper-income taxpayers and companies, but that doesn’t necessarily translate into higher revenue. Simply stated, well-to-do taxpayers have considerable ability to earn less income and/or report less income when tax burdens increase, and they do the opposite when tax burdens decrease.

That’s true in the United States, and it’s true in European countries such as Sweden, France, Russia, Denmark, and the United Kingdom.

So even if politicians want to fleece upper-income taxpayers, that’s not a successful method of generating a lot of revenue.

I’ve made this point before, but now I have some additional evidence thanks to a new report from the Organization for Economic Cooperation and Development. The Paris-based bureaucracy is probably my least-favorite international organization because of its advocacy for statism, but it collects and publishes lots of useful statistics about fiscal policy in the industrialized world.

And here are three charts from the new study that tell a very persuasive story (and a depressing story for ordinary taxpayers).

First, we can see how the average tax burden has increased substantially over the past 50 years. 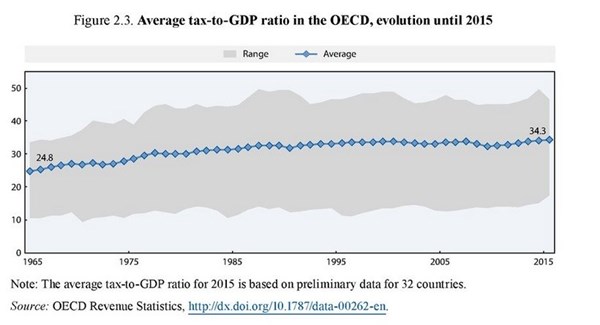 And who is paying all that additional money to politicians? 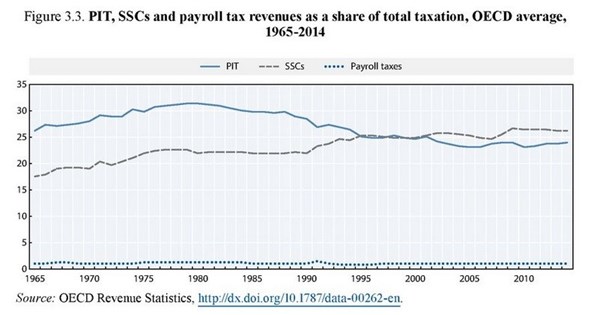 The third chart shows the evolution of the value-added tax burden. This levy takes a big bite out of the paychecks of ordinary people and the rate keeps climbing over time (and if we looked just at European governments that are part of the OECD, the numbers are even more depressing). 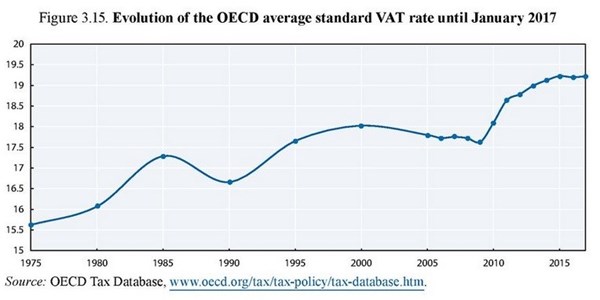 But because of dramatic demographic changes, we are doomed to have a large-sized welfare state. At least that’s what will happen if we don’t reform entitlement programs.

And if we leave policy on auto-pilot and there’s a substantial increase in the burden of government spending, it’s simply a matter of time before politicians figure out new ways of taking more money from lower-income and middle-class taxpayers.

Yes, they may also impose higher rates on “rich” taxpayers, but that will be mostly for symbolic purposes since those levies won’t generate substantial revenue.