Although controversial among many, nuclear power remains the main source of zero-carbon energy.

Today marks the 35th installment in a series of articles by HumanProgress.org titled Heroes of Progress. This bi-weekly column provides a short introduction to heroes who have made an extraordinary contribution to the well-being of humanity. You can find the 34th part of this series here.

This week, our hero is Enrico Fermi, the Italian-American physicist who created the world’s first nuclear reactor. Although controversial among many, nuclear power remains the main source of zero-carbon energy that, scientists from NASA calculate, saved millions of people from air pollution-related deaths. Today, 26 percent of electricity in the European Union and 20 percent of electricity in the United States is generated by nuclear power. Those numbers will likely rise in the coming decades.

Enrico Fermi was born on September 29, 1901, in Rome, Italy. His father was a division head in the Ministry of Railways, and his mother worked as an elementary school teacher. Even at a young age, Fermi showed a keen interest in science and could often be found building scientific contraptions, such as gyroscopes and electric motors. Fermi was baptized as a Roman Catholic but remained an agnostic throughout his life.

Fermi's academic advisor, Luigi Puccianti, used to say Fermi was so bright that “there was little [that he] Puccianti could teach him.”

In 1918, Fermi graduated from high school and won a scholarship to the prestigious Scuola Normale Superiore di Pisa, Italy. Fermi initially chose to major in mathematics but soon switched to physics, focusing on quantum mechanics and atomic physics. The faculty was so impressed with Fermi’s intellect that they quickly put him in the doctoral program. His academic advisor, Luigi Puccianti, used to say Fermi was so bright that “there was little [that he] Puccianti could teach him.”

Fermi was awarded a doctorate degree in physics in 1922 when he was just 20 years old. In 1923, Fermi was awarded a scholarship by the Italian government, which allowed him to spend several months studying with renowned physicist Max Born at the University of Gottingen. Fermi also received a scholarship from the Rockefeller Foundation to study at the University of Leiden. He moved back to Italy in late 1924.

In the early stages of his career, Fermi primarily focused on electrodynamic problems and theoretical investigations into spectroscopic phenomena (i.e., the interaction between matter and electromagnetic radiation). In 1934, Fermi began to study the atom. He demonstrated that nuclear transformation could occur in nearly every element subjected to neutron bombardment. When he split the atom of uranium, Fermi found that the experiment led to the slowing down of neutrons, which caused nuclear fission and the production of new elements beyond the known periodic table at the time.

In 1938, Fermi was awarded the Nobel Prize in Physics “for his work with artificial radioactivity produced by neutrons, and for nuclear reactions brought about by slow neutrons.” At that time, Italy had just passed anti-Semitic laws that threatened Fermi’s Jewish wife, Laura, and put many of his research assistants out of work. When Fermi and Laura traveled to Stockholm for the Nobel Prize award ceremony, the pair decided not to return to Italy. Instead, they chose to travel with their two children to the United States.

Fermi worked relentlessly to pursue the idea of nuclear energy.

Fermi was offered several positions across the United States and accepted a physics professorship at Columbia University in New York. While at Columbia, Fermi found that when uranium neutrons were emitted into another batch of fissioning uranium, they would split the uranium atoms and set off a chain reaction, thus releasing a tremendous amount of energy. Fermi worked relentlessly to pursue the idea of nuclear energy and, after moving to the University of Chicago in 1942, he successfully constructed the first artificial nuclear reactor, named “Chicago Pile-1.”

Built in a squash court situated underneath the University of Chicago’s football field, the Chicago Pile-1 was almost 25 feet in diameter. It contained 380 tons of graphite blocks, almost 6 tons of uranium metal, and 40 tons of uranium oxide—all distributed in a carefully designed pattern. Construction of the reactor was completed on December 1, 1942. The next day, the reactor reached a state in which its nuclear-fission chain reaction became self-sustaining. The experiment was the first controlled nuclear chain reaction. The Chicago Pile-1 quickly became the prototype for many other large nuclear reactors that were being built across the United States.

In 1944, Fermi moved to Los Alamos and started working as an associate director at the Manhattan Project, which focused on the development of the atomic bomb. In the same year, Fermi and his wife and children became American citizens. After the war ended, Fermi accepted a professorship at the University of Chicago and was also appointed to the U.S. General Advisory Committee for the Atomic Energy Commission. 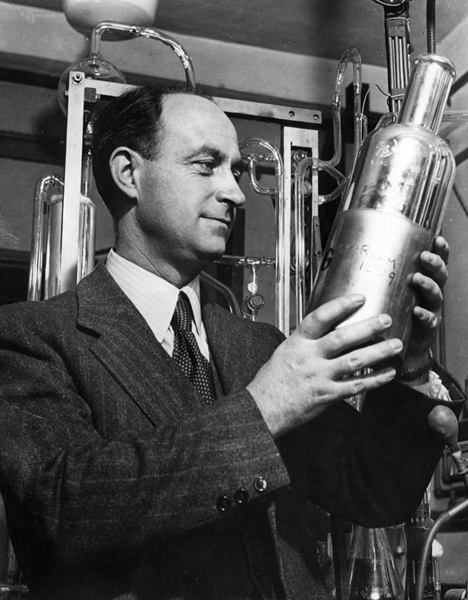 For the remainder of his life, Fermi’s work focused on high energy physics. He also led investigations on the origins of cosmic rays. In 1954, Fermi was diagnosed with incurable stomach cancer. He died on November 28, 1954, at his home in Chicago.

Many awards, institutions, and concepts are named after Fermi, including the Fermilab in Illinois, the Enrico Fermi Award given by the U.S. Department of Energy, and the Fermi Gamma-ray Space Telescope. Fermi is also only one of 16 scientists who have an element named after them. It is called fermium (Fm).

Nuclear reactors have provided humanity with reliable, and relatively safe and clean energy for close to eight decades.

Nuclear fission is one of the most significant discoveries in human history. Nuclear reactors have provided humanity with reliable, and relatively safe and clean energy for close to eight decades. Accidents have been rare and, with the exception of Chernobyl, manageable in terms of their negative impact on humans and the environment.

Today, nuclear power remains the only reliable source of energy that emits zero carbon dioxide into the atmosphere and can be scaled to meet the growing needs of human civilization. Nuclear power has improved hundreds of millions of lives and is likely to continue to do so for decades to come. For these reasons, Enrico Fermi is our 35th Hero of Progress.

Alexander C. R. Hammond is a policy advisor at the Institute of Economic Affairs, a Senior Fellow at African Liberty and a Young Voices contributor. He frequently writes about African development, economic freedom, global wellbeing and British politics. Previously, he was a Research Associate at the Cato Institute's Center for Global Liberty and Prosperity.