Is college itself to blame?

The idea that a college education is the most important element in landing a job is continually impressed upon today’s young people. As a result, many head to the best university they can afford (or not afford).

But if a recent report out of the U.K. is any indication, a college degree does not necessarily a good employee make. As the chart below shows, many employers are increasingly dissatisfied with new employee attitudes toward work, problem-solving and communication skills, and the ability to relate well to customers. 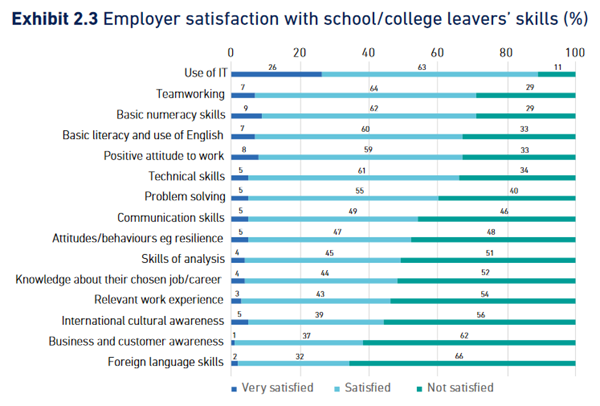 The Telegraph gave backing to these numbers by offering the real-life experiences of employers, one of whom is Crescens George:

Crescens George, chief operating officer of Be Wiser Insurance group, told The Telegraph that graduates are not prepared for ‘the real world of work’, and often require ‘ego-massaging’.

‘You would expect that university education would teach some basic business etiquette, and certainly communication skills.’

Recalling a negative experience with a graduate he had previously hired, George said:

‘He was not willing to make the sacrifice of learning through the ranks. I can only attribute this to the stress of having 50k debt [from university loans] hanging over his head, and of finding out that the real world of work is different to how it’s painted in the lecture rooms.

‘Had we not had to waste around 12-14 months on unnecessary graduate ego-massaging time, I am sure that this employee would have tasted his success sooner, and opened doors to leadership opportunities by now.’”

While employers such as George pin these employee problems on issues with college, one can’t help but wonder if they started long before students entered the sacred ivy halls. Is it possible that the lack of knowledge of business skills, poor personal communication, and bad attitudes toward work actually begin in a student’s earliest years in the education system?

Consider, for example, the attitudes taught about the individual. In the words of C.S. Lewis, the education system fosters an attitude of “I’m as good as you,” regardless of aptitude or ability. Such an idea leads a student to believe he is God’s greatest gift to humanity, and if left unchecked, will only cause the student to demand greater praise and benefits as he gets older and enters the workforce.

Socialization only occurs within a student’s grade, making it difficult to learn to interact with people outside that circle.

Or consider the social skills training which the education system advances. Socialization has long been a main goal of the system, but that socialization only occurs within a student’s grade, making it difficult for a student to learn to interact with those outside his circle. This becomes problematic when he gets to the workplace and must learn to peacefully co-exist with those 10, 20, and even 50 years older than himself, both as co-workers and customers.

Furthermore, the education system has eliminated a lot of introduction to the business world by phasing out hands-on classes such as shop class, while also denigrating the concept of apprenticeship. Without this early introduction, it should be no surprise that new employees lack awareness of the business realm they are entering.

Would we see more satisfied employers and more highly-skilled employees if the education system began to break out of its cookie-cutter, ego-stroking mode?