A Philosophical Mistake Based on False Premises

Why is libertarianism a political nonstarter? Libertarianism has traditionally been lumped in with conservatism, based on their (perceived) mutual opposition to taxes and government spending. As a result of this “fusion” with the right, libertarians have become the junior partner in a political coalition that generally does not represent their views on “social” policies — such as war, immigration, criminal justice, drug prohibition, gay rights, civil liberties, and much else.

It can seem, then, that libertarians’ limited political influence is due to libertarianism’s priorities and resulting political alliance. We might have boxed ourselves into a corner by making abolition of the welfare state a paramount concern, hitching our compassionate social agenda to what is perceived as a cruel, Social Darwinist fiscal agenda. As a result, we cannot stand on our own, so we stand with the right.

Opposing redistribution hamstrings us politically, the theory goes, and ruins our chances to effect change on other issues. Therefore, if we simply dropped our hostility to redistribution and the social safety net, libertarians could be popular and intellectually respectable, and we could finally make real progress on the neglected half of our policies.

This is a philosophical mistake based on two false premises. The American public is not as in favor of redistribution as it supposes, and neither are libertarians as dogmatically opposed to any social safety net.

Americans are not overwhelmingly in favor of egalitarian redistribution. A YouGov poll from January found that a large plurality of Americans oppose raising taxes to “make America as equal as [they] want it to be.” 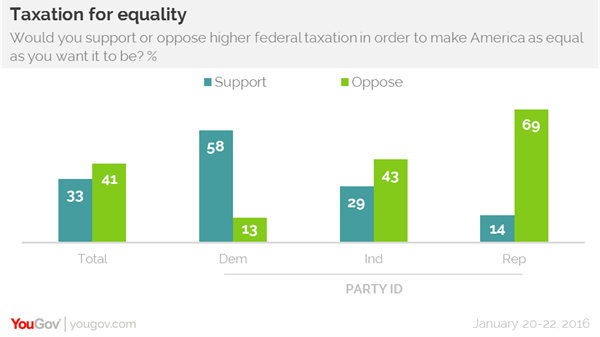 This is in spite of the fact that, in the very same poll, survey respondents wildly overestimated how unequal America actually is. In fact, the “ideal” inequality, for both Republicans and Democrats, is pretty close to what actually exists — which is itself nowhere close to what people imagined it to be. 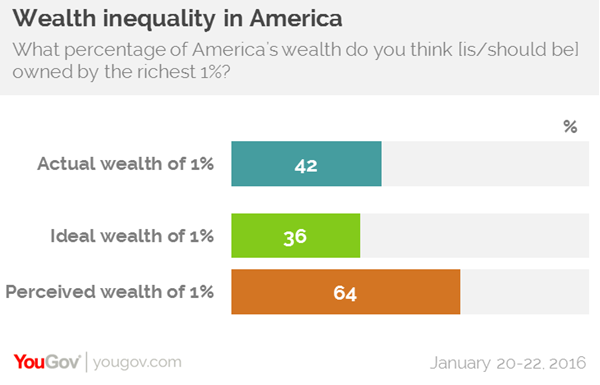 Even young people are not wildly more in favor of redistribution: 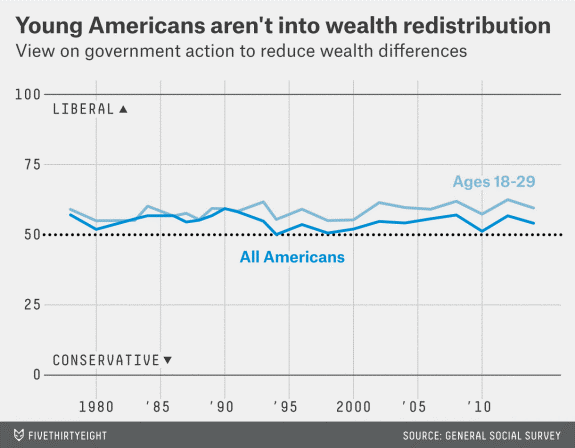 And young people who earn more money are more opposed to government action to reduce inequality. This is significant because young people are typically at the lowest rung on their income ladder, and they will earn more as they age — and thus, presumably, sour on punitive taxes. 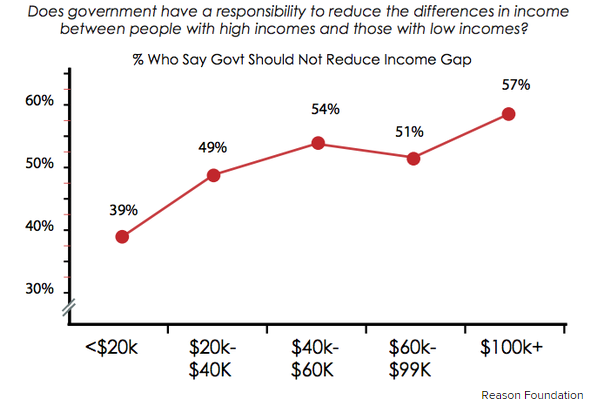 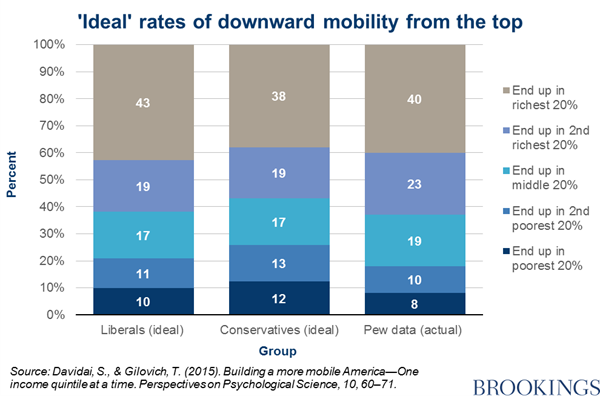 In fact, both liberals and conservatives want about the same share of rich children to remain at the top as do (liberals actually wanted more rich kids to end up rich than conservatives did). Once again, Americans’ “ideal” downward mobility about matches the reality. People want children to move up but not down.

Contra John Rawls, people do not seem to want an egalitarian society. On average, Americans want the top 1 percent to own 36 percent of the wealth, and they want 40 percent of kids born in the top quintile to stay there.

(You could dismiss these survey results as the random guessing and blind prejudice of ignorant voters — and, of course, you’d be right. And you could always ask loaded questions to tip the poll results towards more or less redistribution. But if we are going to dismiss public opinion as ignorant, irrational prejudice, why would we be surprised that most Americans aren’t thoroughgoing libertarians?)

It’s true that Americans do want a social safety net — to alleviate poverty, not to reduce inequality — but most of the welfare state as it actually exists has very little to do with either poverty or inequality.

How Fringe Are Libertarians about Welfare?

Americans are not wild-eyed egalitarians. Moreover, most libertarians and fiscal conservatives are not, in fact, dogmatically opposed to any sort of safety net (whether they ought to be is a different question). We don’t have to dredge up the cliché of “Even Milton Friedman and even F.A. Hayek supported a basic income.” Just talk to some actual welfare scholars at AEI, Heritage, Cato, or the Manhattan Institute. They are focused on making the welfare state less burdensome, expensive, centralized, and destructive — not on burning it to the ground and exacting reparations from poor people.

And it’s not just these sophisticated Beltway-tarians. Pew’s 2014 study on libertarians in the electorate found that, while libertarians are more likely than the general public to think that “government aid to the poor does more harm than good by making people too dependent on government assistance,” the difference was not overwhelming: 57 percent of libertarians vs. 48 percent of the public. Clearly, there are a lot of Americans who are receptive to one libertarian critique of the welfare state.

This doesn’t even get to the question of taxes, but it's worth noting that tax cuts and tax reform are eternally popular issues. The anti-tax coalition probably does more to practically slow the march of big government than all our philosophizing. Trying to be the cool kid on the block by embracing more welfare necessarily requires abandoning our most popular agenda: cutting taxes.

So Why Aren’t Libertarians Winning? (Or Are They?)

If the public is not in love with welfare, and libertarians are not shrieking fanatics out to abolish all of it this second, why is libertarianism a political nonstarter? Why can’t libertarian candidates get traction? Why, frankly, are there so few libertarians?

Even minimally consistent libertarians are a rare breed: Pew found just five percent of the public who generally matched the libertarian profile of free market, anti-war, fiscally conservative, and socially liberal. While you can always slice up the electorate using a number of broad measures of libertarian sentiment, it’s clear that libertarians are not a dominate political force.

And yet, the public is moving — slowly, haltingly, inconsistently — in a more libertarian direction on many issues. As FiveThirtyEight puts it, there are few libertarians in America, but many Americans have libertarian views. On gun rights, gay rights, the drug war, immigration, and a variety of measures of fiscal conservatism, the public has become more opposed government intervention.

But voters don’t like consistent political philosophies, and they have no incentive to adopt one. They want their opinions à la carte, based on whatever makes them feel good and signals that they are a good person; they don’t want to be compelled to accept something just because they accept its premises. Cognitive dissonance, not philosophy, is the key to understanding public opinion.

So it’s not likely that a majority of the public will become thoroughgoing libertarians — or socialists, or Rawlsian liberals, or Burkean conservatives. But that doesn’t mean that social change is impossible. We see it all around us.

As Fareed Zakaria once pointed out, the classical liberals won almost all of their major battles. We’ve seen the end of slavery, monarchy, the established church, communism, imperialism, mercantilism, eugenics, and many other great evils. Liberal and conservative coalitions (relying at least in part on libertarian ideas) defeated Jim Crow, racist immigration quotas, and the draft; they got civil rights protections, industrial deregulation, freer trade, tax cuts, gun liberalization, and welfare reform. Today, the tide is turning on things like asset forfeiture, drug prohibition, the death penalty, and gay marriage.

Moreover, as Bryan Caplan notes, when we look at the realm of ideas, rather than public opinion, libertarians are not such an insignificant group. Scan the list of Nobel Laureates in Economics: Hayek, Friedman, Coase, Buchanan, Ostrom, Smith, North, Becker — all hugely important figures in modern libertarian thought. In policy, in philosophy, in economics, in law, libertarians are at least as influential as conservatives.

Being Pragmatic with Principles

It’s not at all clear that what is holding back libertarian ideas is a lack of intellectual credibility — or that we’d gain such credibility by abandoning half of our philosophy. Nor is it clear that libertarians would gain electoral success by embracing redistribution or the welfare state.

Instead, libertarians should focus on where we are winning (whether in the realm of education, policy, or public opinion) and devise strategies that maximize our impact in expanding freedom wherever we can. That doesn’t mean demanding all things at all times, but it can’t mean ignoring the foundations of our beliefs wherever they seem impolitic or inconvenient. You can be pragmatic without being unprincipled.

Libertarianism is attractive because it offers a coherent vision of a free society based on the primacy of individual liberty. In many ways, the purpose of libertarianism is to reunify the pieces of liberty that have been haphazardly fragmented over time: the economic and the social, the intellectual and the commercial, the personal and the cultural. To simply give up, to surrender in one sphere or another, would not save the libertarian project — it would abandon it to incoherence.