Does Democratic Socialism Work Any Better Than Totalitarian Socialism? Well ...

When I write about socialism, I often point out that there’s a difference between how economists define it (government ownership, central planning, and price controls) and how normal people define it (lots of taxes, redistribution, and intervention).

These definitions are blurry, of course, which is why I created a “socialism slide” to show how countries oftentimes are an odd mix of markets and government.

But one thing that isn’t blurry is the evidence on what works. Simply stated, there is less prosperity in nations with big government compared to nations with small government. 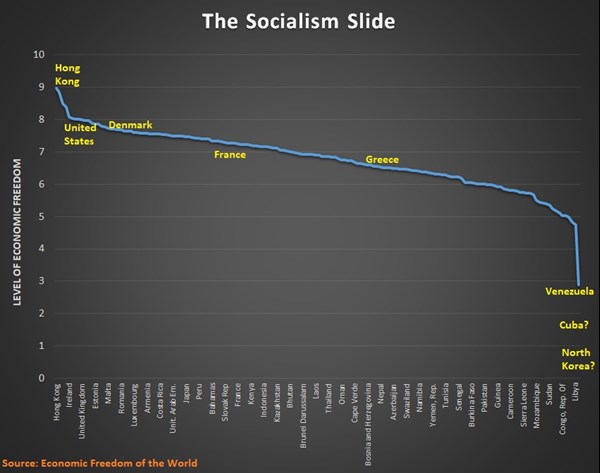 And it doesn’t matter whether socialism is the result of democracy or tyranny.

Kristian Niemietz is with the Institute of Economic Affairs in London. He explained for CapX that mixing democracy with socialism doesn’t fix anything:

Mention the economic failures of the former Eastern Bloc countries, or Maoist China, or North Vietnam, or today, of Cuba or Venezuela or North Korea, and the answer will invariably be: “But that was a dictatorship! That’s got nothing to do with me, I’m a democratic socialist!” …“[S]ocialism means ‘economic democracy’…But the…economic failures of socialism never had anything to do with a lack of democracy. Democratisation improves many things, and is desirable for many reasons. But it does not, in and of itself, make countries richer. …The empirical literature on this subject finds no relationship either way between economic development, and the system of government. …If socialists want to make the case that democracy was the magic missing ingredient… How exactly would democracy have closed the economic gap between East and West Germany, or North and South Korea, or Cuba and Puerto Rico, or Maoist China and Taiwan, or the People’s Republic of Angola and Botswana, or Venezuela and Chile?

Meanwhile, Kevin Williamson pointed out in National Review that post-war socialism in the United Kingdom failed for the same reason that socialism fails anywhere and everywhere it is tried:

History counsels us to consider the first adjective in “democratic socialist” with some skepticism. …the socialism that reduced the United Kingdom from world power to intermittently pre-industrial backwater in the post-war era was thoroughly democratic. …In the United States, we use the word “democratic” as though it were a synonym for “decent” or “accountable,”but 51 percent of the people can wreck a country just as easily and as thoroughly as 10 percent of them. …The problems of socialism are problems of socialism — problems related to the absence of markets, innovation, and free enterprise… Socialism and authoritarianism often go hand in hand (almost always, in fact), but socialism on its own, even when it is the result of democratic elections and genuinely democratic processes, is a bottomless well of misery. …rights — property rights and the right to trade prominent among them — also find themselves on the wrong side of majorities, constantly and predictably. But they are…necessary for a thriving and prosperous society. Socialism destroys societies by gutting or diminishing those rights. Doing so with the blessing of 50 percent plus one of the population does not make that any less immoral or any less corrosive.

But other nations haven’t been so lucky. Democratically elected governments adopted socialism in Greece and Argentina, but neither country found a savior to restore economic liberty (or maybe voters didn’t want to reverse the failed policies).

What about the United States? Will we vote ourselves into socialism?

Given the wretched track records of Wilson, Hoover, FDR, Nixon, Obama, etc, I’m tempted to say that we’ve been doing that for more than 100 years.

But I don’t want to be unduly pessimistic. America hasn’t slid too far down the socialism slide. Indeed, we’re actually ranked #6 in the world for economic liberty.

That’s the good news. The bad news is that there are lots of proposals for additional bad policy and plenty of politicians clamoring to move in the wrong direction.

To see what that might mean, I’ll close with some polling data that the Washington Examiner shared earlier this year. Here are things that might happen if socialists (however defined) get power in the United States: 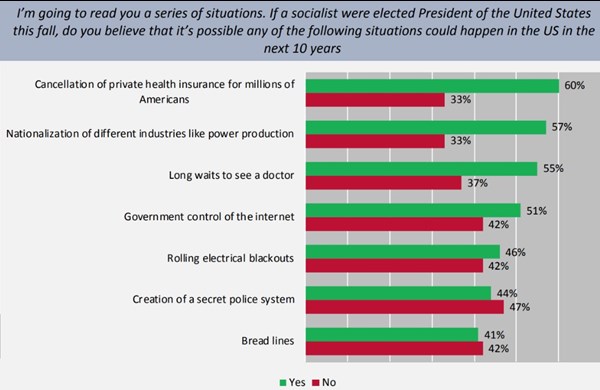 And here are things that the American people say would qualify as socialism: 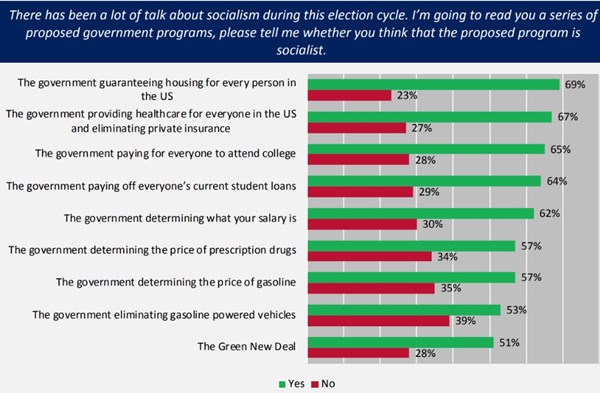 Ugh, that’s a recipe for the Venezuela-fication of the U.S. economy.

P.S. For what it’s worth, notwithstanding his statist platform, I think Joe Biden only intends to incrementally go down the slide (whereas Bernie Sanders would have greased the slide for a rapid descent).