Europe Rose Because of Jurisdictional Competition

Plenty of classical thinkers and Nobel Prize-winning economists seem to think so.

During the dark ages, nations like China were relatively advanced while Europeans were living in squalid huts.

Governments were forced to adopt better policies because labor and capital had significant ability to cross borders in search of less oppression.

But that began to change several hundred years ago. Europe experienced the enlightenment and industrial revolution while the empires of Asia languished.

What accounts for this dramatic shift?

I’m not going to pretend there’s a single explanation, but part of the answer is that Europe benefited from decentralization and jurisdictional competition. More specifically, governments were forced to adopt better policies because labor and capital had significant ability to cross borders in search of less oppression.

I’m certainly a big fan of making governments compete with each other, but even I didn’t realize how jurisdictional rivalry gave us modernity.

But you don’t have to believe me. This topic was discussed by Professor Roland Vaubel at last week’s Mont Pelerin Society meeting. Here are some excerpts from one of Professor Vaubel’s papers on the topic.

…competition among the public institutions of different countries can benefit from an international competitive order which preserves peace and prevents governments from colluding with each other at the expense of third parties, notably their citizens.

This post will have lots of additional excerpts, but if you’re not as excited by the issue as I am, just take a moment to review this table from Vaubel’s paper (click it for a larger image). You will see that the intellectual history of this issue is enormous, and the common theme is that big, centralized states hinder development. 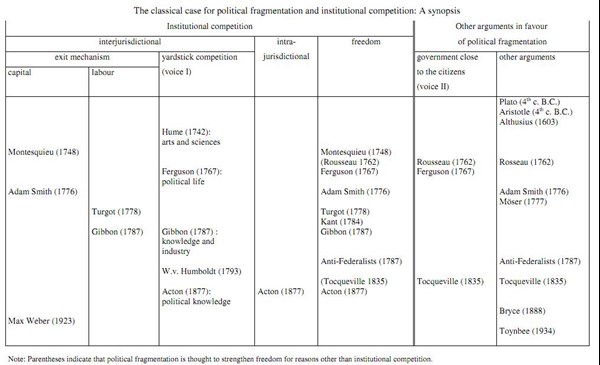 Remember that this table merely looks at the classical thinkers on the issue. The paper also includes modern thinkers, some of who are quoted below. And I also have a postscript that shows how many Nobel Prize-winning economists see jurisdictional competition as a tool for restraining excessive government.

But let’s see what insights we can find from the great thinkers of history, starting with this passage from Charles Montesquieu that Vaubel cites in his paper.

In Europe, the natural divisions form many medium-sized states in which the government of laws is not incompatible with the maintenance of the state; on the other hand, they are so favourable to this that without laws this state falls into decadence and becomes inferior to all the others. This is what has formed a genius for liberty, which makes it very difficult to subjugate each part and to put it under a foreign force other than by laws and by what is useful to its commerce… princes have had to govern themselves more wisely than they themselves would have thought, for it turned out that great acts of authority were so clumsy that experience itself has made known that only goodness of government brings prosperity.

In other words, the mobility of capital among jurisdictions limits government interference.

The father of economics, Adam Smith, made a very similar point. Here’s a passage from the Wealth of Nations that Vaubel includes in his paper.

The … proprietor of stock is properly a citizen of the world and is not necessarily attached to any particular country. He would be apt to abandon the country in which he is exposed to a vexatious inquisition in order to be assessed a burdensome tax and would remove his stock to some country where he could either carry on his business or enjoy his fortune at ease. A tax that tended to drive away stock from a particular country would so far tend to dry up every source of revenue both to the sovereign and society … The nations, accordingly, who have attempted to tax the revenue arising from stock, instead of any severe inquisition … have been obliged to content themselves with some very loose and, therefore, more or less arbitrary estimation. The abuses which sometimes creep into the local and provincial administration of a local or provincial revenue, however enormous so ever they may appear, are in reality, however, almost always very trifling in comparison with those which commonly take place in the administration and expenditure of the revenue of a great empire.

Jacques Turgot (Bastiat was not the only great French economist) looked at the new nation of the United States and saw the benefits of jurisdictional competition.

The asylum which (the American people) opens to the oppressed of all nations must console the earth. The ease with which it will now be possible to take advantage of this situation, and thus to escape from the consequences of a bad government, will oblige the European governments to be just and enlightened

…civil liberty cannot now be easily assailed without inflicting such damage as will be felt in all trades and industries and especially in commerce; and this would entail a diminution of the powers of the state in external relations. This liberty, moreover, gradually advances further. But if the citizen is hindered in seeking his prosperity in any way suitable to himself that is consistent with the liberty of others, the activity of business is  checked generally; and thereby the powers of the whole state are again weakened.

Kant expanded on this notion in another publication.

…peace is created and guaranteed by an equilibrium of forces and a most vigorous rivalry. Thus, nature wisely separates the nations.

…the distribution of power among several states is the best check on democracy. By multiplying centres of government and discussion it promotes the diffusion of political knowledge and the maintenance of healthy and independent opinion. It is the protectorate of minorities and the consecration of self-government. …It is bad to be oppressed by a minority but it is worse to be oppressed by a majority.

The competitive struggle (among the European nation states) created the largest opportunities for modern western capitalism. The separate states had to compete for mobile capital, which dictated to them the conditions under which it would assist them to power.

Weber’s comments are significant from a terminological perspective. As Vaubel noted in his paper, “This is the first time that we find the economic term “competition” rather than jealousy (Hume) or rivalry (Kant) or emulation (Gibbon) in this literature.”

…how did Europeans escape crippling exploitation by their rulers? … The rulers of the relatively small European states learned that by supplying the services of order and adjudication they could attract and retain the most and best-paying constituents …European kings were never as absolute as they wished. The power dispersed among the great proprietors was a check on them, as was the rising power of the market.

In the Western legal tradition diverse jurisdictions and diverse legal systems coexist and compete within the same community. … The pluralism of Western law was a source of legal sophistication and of legal growth. It was also a source of freedom.

In the Middle Ages there was never just one hierarchy of government exercising absolute authority but always two – church and state to use the language of a later age – often contending with one another, each limiting the other’s power” (1995, p. 66). “Since, in the conflicts between church and state, each side always sought to limit the power of the other, the situation encouraged theories of resistance to tyranny and constitutional limitations on government.

Here are some additional quotes from more modern academics, all taken directly from Professor Vaubel’s paper.

For those interested in the topic, Vaubel’s entire paper is worth reading. But if you don’t have time, just remember that national sovereignty should be celebrated. Not because national governments are good, but because competition between governments is the best protector of liberty and civilization.

I favor tax competition, financial privacy, and fiscal sovereignty because these institutions lead to better tax policy. But Vaubel teaches us that promotion of better tax policy is just the tip of the iceberg.

P.S. Since this post is designed to show the intellectual case for jurisdictional rivalry, here are some quotes from a number of Nobel Prize-winning economists.

Competition among communities offers not obstacles but opportunities to various communities to choose the type and scale of government functions they wish.

…competition among nations tends to produce a race to the top rather than to the bottom by limiting the ability of powerful and voracious groups and politicians in each nation to impose their will at the expense of the interests of the vast majority of their populations.

…tax competition among separate units…is an objective to be sought in its own right.

With apologies to Adam Smith, it’s fair to say that politicians of like mind seldom meet together, even for merriment and diversion, but the conversation ends in a conspiracy against the public, or in some contrivance to raise taxes. This is why international bureaucracies should not be allowed to create tax cartels, which benefit governments at the expense of the people.

[I]t’s kind of a shame that there seems to be developing a kind of tendency for Western Europe to envelope Eastern Europe and require of Eastern Europe that they adopt the same economic institutions and regulations and everything.  …We want to have some role models… If all these countries to the East are brought in and homogenized with the Western European members then that opportunity will be lost.

…international competition provided a powerful incentive for other countries to adapt their institutional structures to provide equal incentives for economic growth and the spread of the ‘industrial revolution.’

…while it has always been characteristic of those favouring an increase in governmental powers to support maximum concentration of powers, those mainly concerned with individual liberty have generally advocated decentralisation.

[Tax competition] is a very good thing. …Competition in all forms of government policy is important. That is really the great strength of globalization …tending to force change on the part of the countries that have higher tax and also regulatory and other policies than some of the more innovative countries. …The way to get revenue is doing all you can to encourage growth and wealth creation and then that gives you more income to tax at the lower rate down the road.

In other words, it’s not just me making these arguments.

But I’m probably the only person mentioned in this post who almost got tossed into a Mexican jail for having these views. But that’s the risk one takes when fighting evil.