Current taxpayers will have to pay to cover the profligate spending of the past that was done with assurances from politicians, economists, and complacent voters that deficits don't matter.

The OMB's projections show debt payment outlays growing a startling 70 percent from 2017 to 2020. The sector with the next-highest growth rate is defense, but that increases by only 20 percent over the same period: 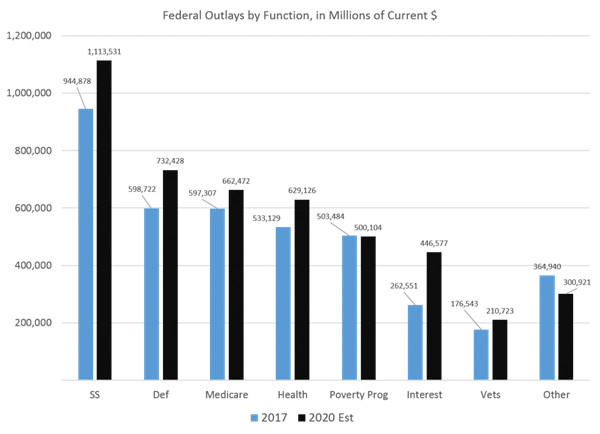 While Medicare, defense, and Social Security all, for now, still use up much larger portions of federal spending, it won't be long before payments on the debt will eat up hundreds of billions of dollars every year on par with programs like Medicare and national defense.

Over just a few years, that will be trillions of dollars that current taxpayers will have to pay to cover the profligate spending of the past that was done with assurances from politicians, economists, and complacent voters that deficits don't matter.

Over just a few years, that will be trillions of dollars that current taxpayers will have to pay to cover the profligate spending of the past that was done with assurances from politicians, economists, and complacent voters that deficits don't matter.

Ten years from now, that slice of the pie now labeled "interest" is likely to be the same size as the Medicare and Defense slices.

The Consequences of Rising Interest Rates

And it won't be a surprise as interest rates increase and debt payments get larger. Indeed, the CBO expects the interest rate on the 10-year Treasury note to increase 4.2 percent in 2020. It moderates after that but never returns to the sorts of very low rates we've seen in recent years. 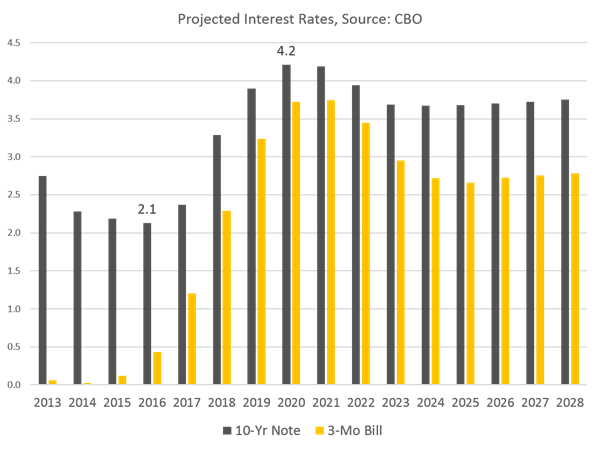 The result is a sizable increase in total outlays necessary for debt service. While ultra-low interest rates have helped debt payments fall from the high levels seen in the 1980s and 1990s, rising rates will push them up to record levels.

This won't be an unmanageable problem, of course, if revenues boom alongside the need for higher debt payments.

Banking on a Strong Economy

To construct a future reality where this all turns out fine, however, we have to assume there will be no recession any time in the next decade.

This is what the CBO very optimistically assumes for its revenue projections. 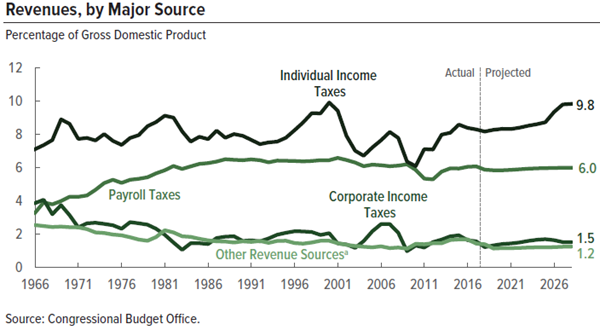 Should a recession strike, we are likely to see a large drop-off in revenues, just as we have seen in the last two recessions. In the 2008-2009 recession, of course, federal revenues fell 3 percent in 2008 and an additional 13 percent in 2009. This caused the annual deficit to balloon to nearly a half trillion dollars in 2008 and then to 1.4 trillion in 2009.

Were a revenue situation to approach anything like this in the next recession, we would see Congress have to make some very hard choices about where to cut. Either that, or it will need to allow deficits to explode again. And if that happens—depending on how the Fed intervenes and how global investors react—there will be further upward pressure on interest rates paid to service US debt.

Perhaps most troubling of all, the US is still running deficits—and we're in a "boom" period.

Perhaps most troubling of all, the US is still running deficits—and we're in a "boom" period. The US had a deficit of $778 billion dollars in 2018, just as unemployment was hitting historic lows. That, of course, doesn't bode well for what will happen to deficits when a "bust" hits, income taxes fall, and revenues evaporate.

What might actually happen as the economy slows will be very difficult to guess since it's impossible to know how the central banks of the world will react. But we do know that any combination of falling revenue and rising interest rates will lead to a situation where federal programs will either face real cuts—or the central bank will need to enact a new wave of money supply inflation, which will be necessary to cover the federal revenue shortfall without allowing interest rates on government debt to rise dramatically.

Exactly how that will affect ordinary households in terms of price inflation is impossible to guess for now.

This article from reprinted from the Mises Institute.