Dad jokes are not funny. They are uncomfortable. So why do they persist?

“What time did the man go to the dentist? Tooth hurt-y.”

As far as I can tell, the Dad joke (the near cousin of the pun – for more examples, try this Buzzfeed article) has existed since time immemorial. But if natural selection has anything to do with the heritability of traits, you would think dad humor would have been wiped from the human gene pool a long time ago.

Dad jokes are not funny. They are uncomfortable. They are sometimes endearing. But they are not funny, and they serve the opposite purpose of most humor. So why do fathers continue to tell them from one generation to the next?

There’s no rational explanation for it. Unless….

What if the Dad joke offers an evolutionary advantage?

This deserves a full team of anthropological and psychological researchers, but it probably won’t get it. The task has fallen to me. I have to determine the real cause of this bizarre human behavior.

What if the dad joke is made for the benefit of the next generation of males?

Here are the ground rules for evolutionary advantage: it helps you pass your genes on to the next generation. To do that, it has to help you on some level with the ladies. The ladies are the ones who have veto power on what gets to the next generation, so having traits that make you attractive is key.

Two of these traits? Coolness and a good sense of humor – both traits completely undermined by dad humor.

The good news for dads is that they no longer have the problem of having to reproduce. That part of their evolutionary job is already done. But what if the dad joke is made for the benefit of the next generation of males? This generation still has to fulfill the evolutionary “mandate” to reproduce.

You can see this dynamic play itself out in wolf populations, where younger males will challenge the “alpha” male of a pack for dominance and mating access. The wolves spar and engage in bounded conflict to establish who’s top dog. The one that submits will usually have to establish that it is not a threat to the dominance of the alpha male. To do this, it may even expose its own neck to the jaw of the alpha as a playful sign of submission. 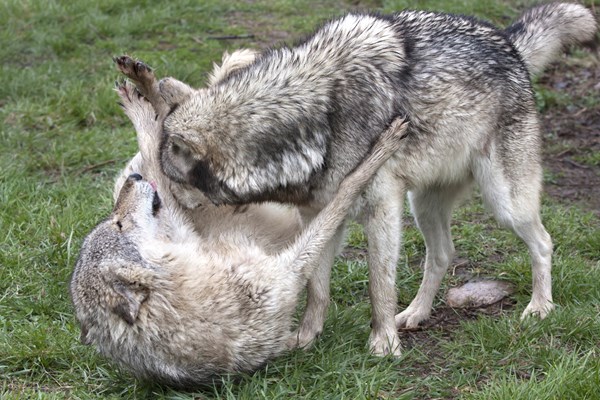 What if human fathers do things differently than older alpha wolves? What if they willingly choose to lose the dominance battle to their male sons to help them out? This is a brilliant strategy to ensure that your genes (now carried by your male children) get passed on to yet another generation. You don’t want to take chances that your scrawny cubs don’t get a chance with the females. You take things into your own hands instead, and things get… desperate.

The Dad joke maintains social harmony and is key to the continued survival of the human race. Enter the Dad joke. In my evolutionary theory of Dad humor, the Dad joke is a voluntary surrender of coolness and good humor to the next generation. It’s a self-destructive act that passes on two of male-kind’s most powerful assets for impressing the ladies.

The younger generation may act ungrateful or embarrassed, but they become relatively cooler and funnier every time their fathers tell Dad jokes. It’s a beautiful exchange, really. The Dad, like the defeated wolf, is putting his own neck into the jaws of his young wolf challenger.

So basically, the Dad joke maintains social harmony and is key to the continued survival of the human race. Think about it.