Today’s unprecedented debt-to-economy ratio includes $2.5 trillion in new debt since the outset of the COVID-19 pandemic.

The US national debt has just reached 120.5 percent of the nation’s annual economic output, breaking a record set in 1946 for the highest debt level in the history of the United States. The previous extreme of 118.4 percent stemmed from World War II, the deadliest and most widespread conflict in world history.

Today’s unprecedented debt-to-economy ratio—which is economists’ primary measure of government debt—includes $2.5 trillion in new debt since the outset of the COVID-19 pandemic. However, it doesn’t account for the vast bulk of economic damage inflicted by government-mandated business shutdowns, which will soon make the debt ratio significantly larger by decreasing its denominator. Although this decline has already begun, most of it is not yet reflected in the official data on the size of the US economy.

Unlike the debt from World War II—which rapidly fell once the war ended—the modern national debt has been on a steep upward path for decades. The main driver of this has been increased government spending on social programs, which grew from 20 percent of federal expenses in 1959 to 62 percent in 2018. Without substantial reforms, social spending will increase further and drive the debt to levels that dwarf the debt from World War II.

Contrary to claims that government debt isn’t a major problem, a broad range of facts show that it can have serious negative consequences, such as lower wages, weak economic growth, increased inflation, higher taxes, reduced government benefits, or combinations of such results. These, in turn, impair people’s quality of life and can reduce their life expectancy. Some of these impacts may have already begun.

The US Treasury’s official figure for the debt of the federal government on June 15, 2020 is $26,131,295,159,192. This measure of raw debt has grown through most of the nation’s history, but it overstates the scale of debt over time because it doesn’t account for inflation, population increases, or economic growth. These factors allow governments to carry more debt with less harm than if their economies were smaller.

To adjust for such factors across nations and over time, economists and government agencies commonly measure government debt as a portion of each nation’s annual economic output, or gross domestic product (GDP). This accounts for varying population sizes, some effects of inflation, and the capacity of governments to service their debts.

Over the course of US history, the government’s debt-to-GDP ratio has averaged 30.3 percent and has stayed around or below this level except for a massive spike from World War II and during the modern era. The WWII record of 118.4 percent held for the past 74 years but was toppled on May 22, 2020 when it reached 118.5 percent. By the end of May, it had reached 119.5 percent, or four times its average over the nation’s history: 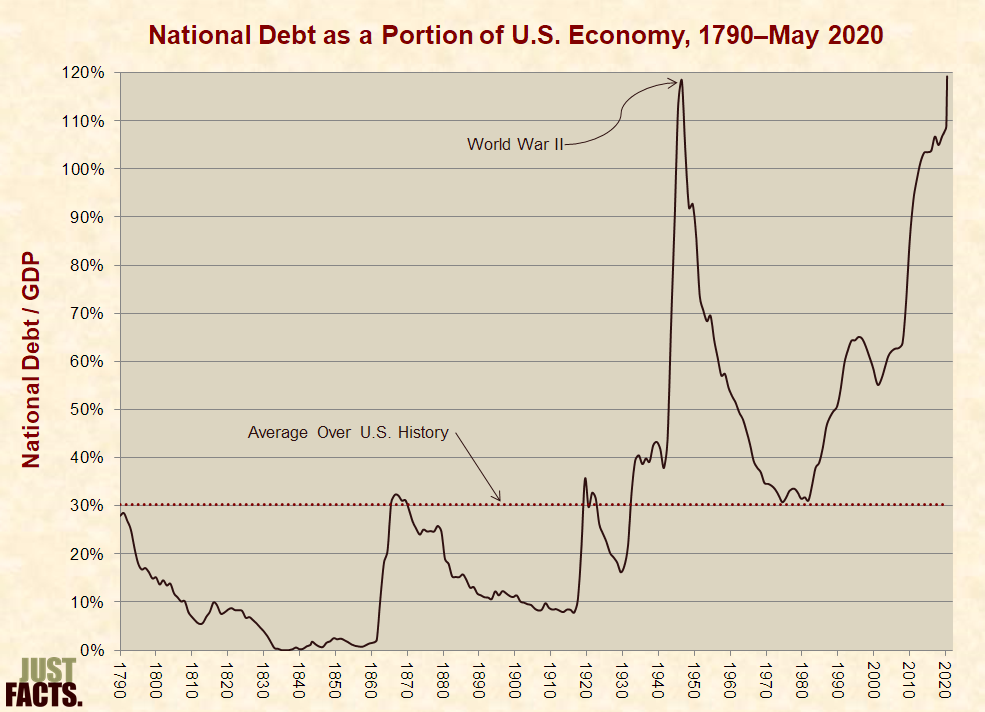 The debt continued growing in early June and reached 120.5 percent by the 8th day of the month. These debt-to-GDP figures are based on the latest available yearly data from the US Treasury and the US Bureau of Economic Analysis, the federal agency that calculates official GDP figures.

From the day that the World Health Organization declared COVID-19 a pandemic (March 11) through June 8th, the US national debt rose by $2.5 trillion or 11.5 percentage points of GDP. This was mainly due to:

Because the latest available GDP data is for the first quarter of 2020, and the business shutdowns didn’t begin until mid-March, they affect only half a month out of a year of data. Thus, the shutdowns have a relatively small effect on the latest annual GDP figure, reducing it by about 0.4 percent.

Also in response to COVID-19 and the shutdowns, the Federal Reserve created trillions of dollars in new money to purchase federal government debt and other financial assets. The effects of such policies don’t necessarily manifest in the national debt but can impact people in other ways.

As with the recent debt increases from the COVID-19-related laws, the national debt has been mainly driven for the past 60 years by social spending, or government programs that provide healthcare, income security, education, nutrition, housing, and cultural services. These programs have grown from 20 percent of all federal spending in 1959 to 62 percent in 2018: 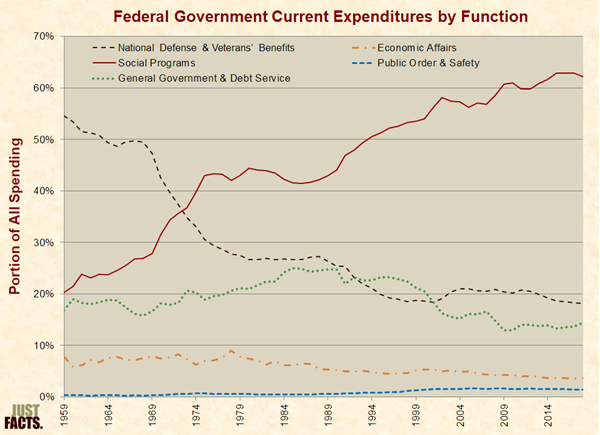 Under current laws and policies, the Congressional Budget Office projects that almost all future growth in debt will be due to increased spending on social programs and interest on the national debt.

Nonetheless, many media outlets and politicians have blamed the skyrocketing debt on military spending. In reality, however, military spending has plummeted from 55 percent of all federal expenses in 1959 to 18 percent in 2018. These are comprehensive figures that include standard military expenses, supplemental appropriations like those enacted for the wars in Iraq and Afghanistan, and veteran’s benefits.

Another commonly blamed cause of debt increases is tax cuts, but the fact is that federal tax revenues have stayed roughly level as a portion of GDP for the past 80 years. They commonly declined during recessions and rebounded during recoveries, but the long-term trend has been flat since the 1940s. Before that, tax levels rose dramatically during the Great Depression/New Deal and World War II: 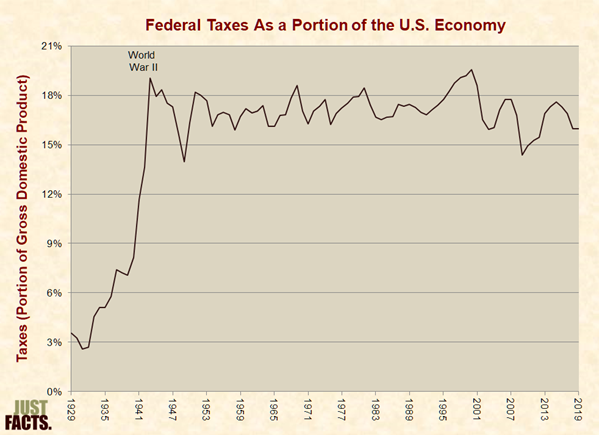 From the era of John F. Kennedy in the 1960s up through Donald Trump, various Congresses and Presidents have enacted a range of tax cuts. However, tax levels have stayed generally stable due to tax increases and a phenomenon called “bracket creep.” This automatically raises people’s tax rates over time because many tax laws are not indexed for income growth and/or inflation. Thus, if tax cuts are not periodically implemented, taxes consume a continually greater share of people’s incomes and the nation’s economy.

For instance, after the Trump tax cuts of 2017 took effect, the Congressional Budget Office projected in 2018 that the portion of the nation’s economy consumed by taxes would rise above its long-term average in several years and then continue on an upward trajectory. Part of this increase is due to the certain expiring provisions of the tax cut in 2026, but the general trend is due to bracket creep: 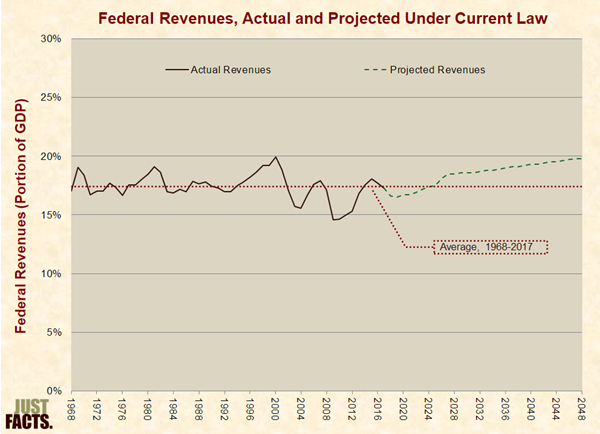 This comprehensive data reveals that many “tax cuts” were actually “tax evens” because they kept taxes on a relatively flat trend for more than half a century.

Given that the debt from World War II was by a large margin the highest US debt for more than 220 years, many people have pointed to it as evidence that large national debts don’t harm economies. For example, Douglas J. Amy, professor of politics at Mount Holyoke College, wrote in 2011:

Forebodingly, the debt exceeded that of WWII in less than a decade, but even before the COVID-19 pandemic, it was on track to grow to more than double the WWII level in the coming three decades. These facts expose the fatal flaw in Amy’s argument—the failure to consider that the WWII debt was a passing spike that plunged after the war, while the modern debt is growing rapidly due to structural issues.

The primary difference between the post-WWII era and today is again, spending. After WWII, federal spending as a portion of GDP fell by 50 percent within two years and averaged 41 percent lower than the last year of the war over the next four decades. In contrast, when Amy wrote the above, the Congressional Budget Office was projecting that under current policies and a sustained economic recovery over the next four decades: 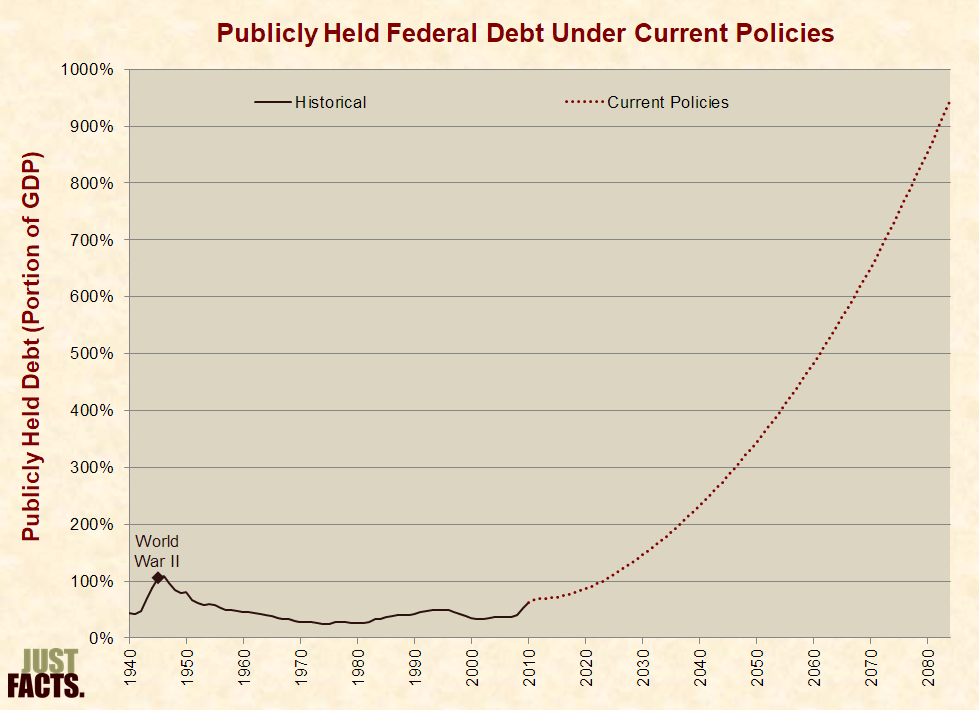 In the years following that projection, both debt and GDP outcomes were worse than predicted, and the Congressional Budget Office released a more dire projection in 2013. At that time, Barack Obama and Paul Krugman were dismissing concerns about the national debt, and David Lauter and Michael Hiltzik of the Los Angeles Times were falsely reporting that debt was falling. Six years later in 2019, the outcome was even worse than projected: 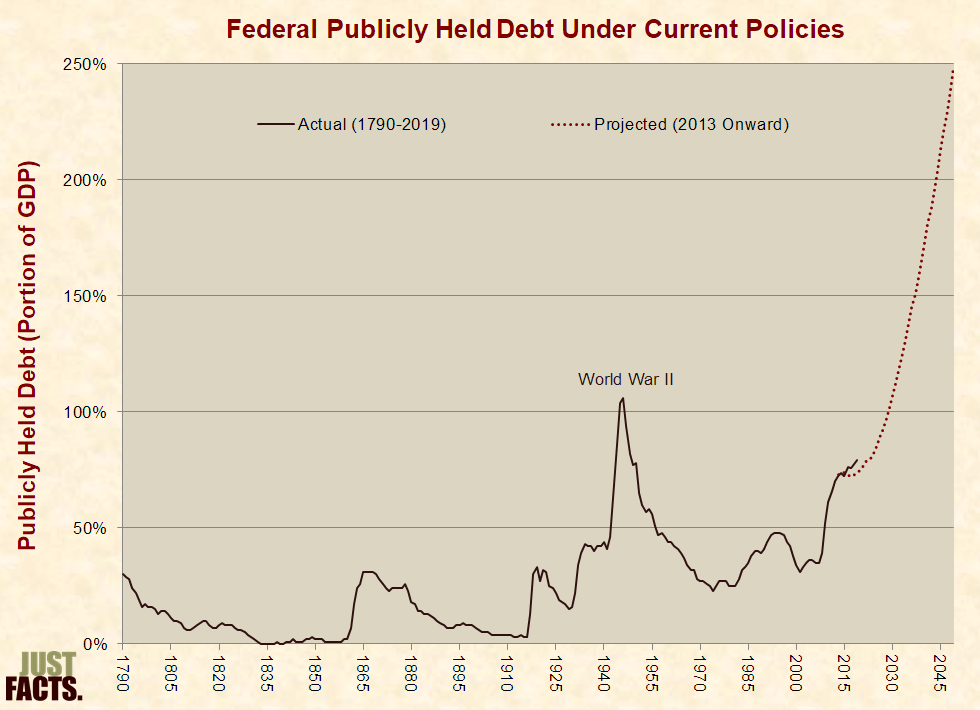 Since 2019, the debt from government responses to COVID-19 has been adding to this, thus steepening its upward trajectory.

All of this has placed the US in a debt situation that is far more critical than at any time in its history. Unlike the WWII era, this is not a passing anomaly but a systemic, escalating problem driven by ongoing federal policies.

Contrary to those who downplay the dangers of government debt, a broad range of scholarly research has documented the harm it can do:

Misinforming people about those matters, numerous media outlets publicized a study said to disprove the connection between high debt and weak economic growth, but the study actually shows what previous studies had found: GDP growth decreases by an average of about 30 percent when government debt exceeds 90 percent of GDP. The authors of the study, however, buried this data on the 10th page of their paper and wrote a deceitful overview, which the media parroted.

The consequences of government debt are not merely potential dangers that might occur at some point in the future. They may, in fact, have already begun. Although association does not prove causation, the national debt has risen dramatically over past decades, and with this, the US has experienced episodes of historically poor growth in GDP, productivity, and household income. These could cause a host of negative impacts on human welfare in areas like education, nutrition, healthcare, and life expectancy.

Some people point to Japan, which has a debt-to-GDP ratio of around 200 percent, as evidence that high national debts are harmless. They claim that Japan has not suffered like Greece (which underwent a debt crisis in 2009) because Japan and other nations that have their own currencies “can never run out of money to pay back what they owe, since they can always print what they need as a last resort.”

In reality, Japan has fared as poorly as Greece when measured by the World Bank’s “preferred“ indicator of human welfare, which is people’s consumption of goods and services. The difference is that Japan has experienced long-term sluggish growth in its living standards as its debt has surged, while Greece endured a sudden collapse in living standards when its debt bubble burst. Ultimately, they ended up in about the same place: 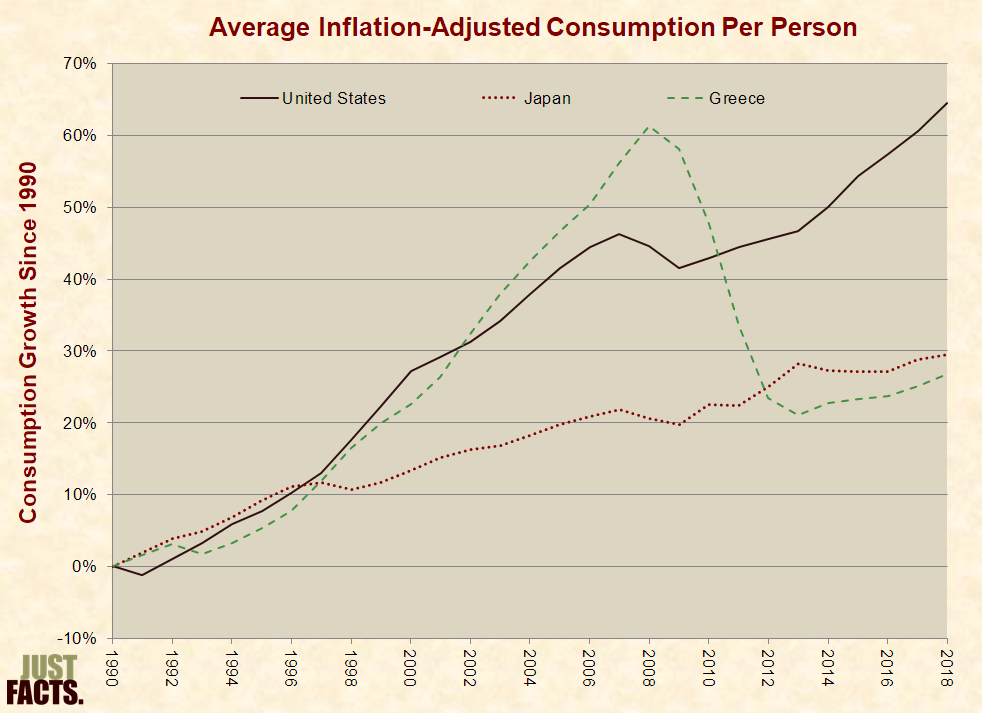 Again, association does not prove causation, so these data don’t prove that Japan’s or Greece’s economic woes were caused by debt, but they do debunk the notion that Japan hasn’t suffered like Greece. Japan’s situation may even be worse than Greece’s, for if debt has played a role in Japan’s long-running slump, it is more difficult for citizens to understand this and hold politicians accountable for their actions. Hence, the harmful effects continue.

While some people imagine that governments can borrow with abandon without hurting people, one of the most established laws of economics is that there is no such thing as a free lunch. The prolific economist William A. McEachern explains why this is so:

There is no free lunch because all goods and services involve a cost to someone. The lunch may seem free to you, but it draws scarce resources away from the production of other goods and services, and whoever provides a free lunch often expects something in return. A Russian proverb makes a similar point but with a bit more bite: “The only place you find free cheese is in a mousetrap.”