John Stuart Mill’s ideas on education are not as well known as Milton Friedman’s. But they may deserve to be. Mill and Friedman agreed that government should not run schools, but for different reasons. (At least each emphasized different things.) Friedman was mainly concerned with productivity improvements that arise through competition. Mill was more concerned with freedom of thought. Mill valued the diversity of opinion that comes from people pursuing their own intellectual journeys, and all compulsion in opinion was anathema to him. The consequences of State schooling in America suggest Friedman and Mill were both correct.

State schools are a productivity disaster. In principle, public schools should thrive in the Information Age. Schools are in the information business, tasked with inculcating knowledge, and the processing and distribution of information have been vastly accelerated by interconnected computing technologies. Moreover, schools should benefit from the Flynn effect—the pattern cognitive psychologists have observed in which aggregate IQ rises a little bit each generation.
And schools are getting more money, too. In real terms, school spending per pupil rose from $2,835 in 1961–62 to $10,694 in 2008–09, according to the National Center for Education Statistics—a 177 percent increase. Yet SAT scores for college-bound seniors are stagnant. High school graduation rates seem to have hit a plateau, and high school graduates are less prepared for college than ever. Better raw material, more money, new technology—and yet no improvement.
The State education system is centrally planned and run by committees, so choice and competition are lost from the system. Stagnation is therefore inevitable. Where market forces prevail, productivity improvement is normal. Computers and cell phones are vastly better than they were twenty years ago. Cars and planes less dramatically so, but they are safer, more fuel-efficient, and have new features. In the energy sector, hydraulic fracturing (fracking) has vastly increased the supply of fossil fuels, so that the United States may become a net energy exporter within the next couple of decades. Less innovative sectors can still use technologies invented in other industries to raise productivity (e.g., by lowering their energy costs or improving their logistics) if competitive market forces are at work. But productive innovation is difficult and competition is the best school in which to learn it. State education plays hooky from that school, so it fails to learn.
Poor public schools are a major bottleneck holding back the entire U.S. economy. The recent increase in inequality has been driven not by capital but by labor income, as Saez and Piketty stress. This reflects sharply rising demand for certain kinds of skilled, educated workers, combined with little supply response. The public schools and universities are unable and/or unwilling to train the kinds of people the market wants. Eric Brynjolffson argues in his book Race Against the Machine that workers are unable to keep up with new technology. Brynjolffson illustrates his point with the chart shown below: 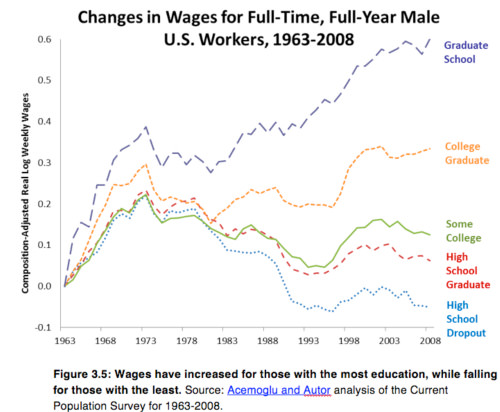 The fact that wages of high school graduates have fallen is a painful remark about how much the market values what the public schools produce. In spite of these high labor premiums, college completion rates among men have actually fallen. College is overregulated and oversubsidized, and there is too much power in the hands of accreditation agencies answerable to the Department of Education. But there is still far more competition and choice there than at the K–12 level. Thanks to competition, the U.S. university system is generally regarded as the best in the world and as an important source of U.S. economic competitiveness. Of course, the top universities—Harvard, Yale, Princeton, Stanford, etc.—are private. And the consensus in academia is that universities would be equipped to produce many more bright college graduates if the public schools provided more students with basic skills.
Milton Friedman wanted to make K–12 education more like the university system through vouchers. Under a voucher system, financing K–12 education would still be the government’s job, but running K–12 education would be opened up to competition and largely privatized. Each student’s family would get a certain dollar value’s worth of vouchers, which could only be spent on education. “Government” schools would get their money by collecting the vouchers of students who chose to attend them and converting those to cash through the government. Direct financing of public schools through the government budget would be curtailed or eliminated. Meanwhile, vouchers could also be used to pay for private school tuition.
Today, the Friedman Foundation for Educational Choice seeks to “advance Milton and Rose Friedman’s vision of school choice for all children.” Voucher programs have been adopted in several countries, including free-market Chile and social-democratic Sweden. In the United States, there has been progress in overcoming legal challenges to school vouchers (especially Zelman v. Simmons-Harris), and voucher programs have been adopted in cities like Cleveland and Milwaukee and states like Indiana. Where tried, vouchers have improved educational outcomes, just as economic theory says they should.

Nathan Smith is a professor of economics and finance at Fresno Pacific University and the author of Principles of a Free Society and Complexity, Competition, and Growth. He blogs at Open Borders: The Case (openborders.info).