This absurd tariff on light-weight trucks is reminiscent of Bastiat's Robinson Crusoe fable.

The other day my daughter, who is moving to Canada, and I were car-hunting at a Volkswagen dealership. During our conversation with a salesman, he told us that the Australian VW sells a superb high-end pickup truck called an Amorak that is not sold in Canada or the United States. 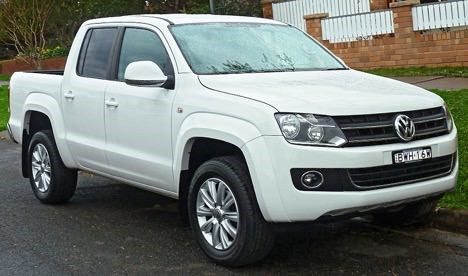 "Why not?" I asked. "That," said the salesman, "is a long story. Google Volkswagen and Chicken Tax to get the answer.”

I did and here is what I discovered.

The German Chancellor reported that half of his correspondence with President Kennedy was over chickens.

According to Wikipedia, the Chicken Tax is a 1963 tariff imposed by the United States on potato starch, dextrin, brandy and light trucks. It was a tit for tat response to tariffs imposed by France and West Germany on U.S. chickens. The period from 1961-1964 was actually known as the Chicken War.

Chicken was an expensive delicacy in Europe up until the sixties when cheap American chickens changed the status quo. Consumption rose, the American chicken, which accounted for almost of all chicken sales, dominated the market, and the price dropped.

The Dutch claimed that U.S chickens were being priced below the cost of production. The Germans accused the Yanks of "fattening chicken artificially with arsenic". Tariffs were imposed, first by France and then by Germany. This resulted in a 25 percent decline in U.S. chicken exports.

You’ll remember that the early 60s were the time of a festering cold war, the Bay of Pigs fiasco, and the Cuban missile crisis. Yet Senator William Fullbright interrupted a NATO nuclear disarmament debate to raise the far more important issue of the "trade sanctions on U.S. chicken” and threatened to cut troops out of NATO. German Chancellor Konrad Adenauer later reported that half of his correspondence with U.S. President John F. Kennedy was over chickens.

How did trucks get into the mix you might ask. Politics!

Lyndon Johnson wanted support from the United Auto Workers union for his civil rights plans, and he wanted to avoid a strike before the 1964 election. UAW chief Walter Reuther wanted the President to stifle import of Volkswagen trucks into the U.S. They high-fived and the rest is history.

Foreign automakers found ingenious ways to circumvent the tax. First "Japanese manufacturers found they could export 'cab-chassis' configurations (which included the entire light truck, minus the cargo box or truck bed) with only a 4% tariff." So they sold cab-chassis to the U.S. and had a truck bed added in America with the finished vehicle sold as a light truck. Many of these sales were sub-contracts to Ford and Chevrolet. Not to be outsmarted by private interests, the government closed that loophole in 1980.

In 1978, Subaru discovered they could add two extra seats to a truck (a crew cab in effect) and the vehicle would be classified as a tariff-free passenger vehicle, not a light truck.

Major Japanese manufacturers eventually built plants in the U.S. and Canada. But Mercedes found a different way to get around the Chicken Tax. "From 2001 to 2006, cargo van versions of the Mercedes and Dodge Sprinter were manufactured in assembly kit form in Germany and shipped to a factory in South Carolina for final assembly with a proportion of locally sourced parts complementing the imported components." Complete units would have been subject to the tariff, but in kit form they were tax exempt.

But the real kicker was Ford's response.

Ford imported all of its first generation Transit Connect models as passenger vehicles by including rear windows, rear seats, and rear seatbelts.

The vehicles are exported from Turkey, arrive in Baltimore, and are converted back into light trucks at [an American] facility by replacing the rear windows with metal panels and removing the rear seats and seatbelts. The removed parts are not shipped back to Turkey for reuse, but shredded and recycled in Ohio.

The process costs Ford hundreds of dollars per van but saves thousands in taxes."

Chrysler announced plans to do the same in 2015.

Harvard's Robert Z. Lawrence, a professor of International Trade and Investment, states that "the chicken tax crippled the U.S. automobile industry by insulating it from real competition in light trucks for forty years."

The Cato Institute called it "a policy in search of a rationale" in its 2003 study, Ending the Chicken War: The Case for Abolishing the 25 Percent Truck Tariff. In this study, author Daniel J. Ikenson notes that domestic producers control "87 percent of the U.S. pickup truck market." Its only usefulness now, says Ikenson, is as a bargaining chip in trade negotiations. But since the Japanese already manufacture in the States because of the tariff, that point is virtually moot.

Especially today, when almost everyone recognizes how beneficial free trade is, the Chicken Tax is wildly unreasonable.

In his classic book, Economic Sophisms, Frederic Bastiat tells a fable about the fiction character Robinson Crusoe. Crusoe was an enterprising fellow. Ax in hand, he intended to chop down a tree to make a plank, but good fortune smiled on Crusoe and a plank conveniently washed ashore on his little island.

A lucky accident? You'd think so, but Crusoe, schooled in the protectionist school of thought and the labor theory of value, thought differently. He believed that retrieving the plank would only cost him “the exertion of carrying it, and the time needed to go down to the beach and climb back up the cliff.”

If I make a plank with my axe, first of all, I shall be assuring myself two weeks' labor; then my axe will will become dull, which will provide me with the job of sharpening it; and I shall consume my provisions, making a third source of employment, since I shall have to replace them. Now labor is wealth. It is clear that I shall only be hurting my own interests if I go down to the beach to pick up that piece of driftwood. It is vital for me to protect my personal labor, and now that I think of it, I can even create additional labor for myself by going down and kicking that plank right back into the sea!"

As absurd as that may seem, when I read about the Chicken Tax, it made me think of Bastiat's Crusoe story. The Chicken Tax is just as absurd.

The people being hurt by this tax are American and Canadian consumers. Their options are reduced since some European manufacturers like Volkswagen don't even bother trying to sell Amoraks or other light trucks in North America.

Furthermore, today’s prices are higher than they should be since Ford and other manufacturers are kicking figurative planks back into the sea when they engage in the destruction described above. All because of this tax.

It is absurd that, except for light trucks, all other components of this tax have been repealed. It is also absurd that the Chicken Tax is ten times that of a normal tariff. It’s absurd that even American companies like Ford are engaging in wanton destruction to avoid this tax. And it is almost criminal that the tax on light trucks came about because of graft in the Lyndon Johnson administration.

Clearly, this tax is only useful as fodder for an absurdist comedy or a stand-up comedian. It deserves to be ridiculed for the ludicrous outrage that it is.