And maybe try a little empathy.

One of the shortest, simplest yet deepest books I have read on politics is The Three Languages of Politics by Arnold Kling. It’s a mere 146 pages and you can have it on your Kindle for a mere $3.99. This is a new and (slightly) expanded edition. (And you can listen to my EconTalk interview with him on the book at no charge.)

Liberals see the world as a battle between victims and oppressors.

Conservatives see the world as a battle between civilization and barbarism.

Libertarians see the world as a battle between freedom and coercion.

Take almost any issue and you see the debate play out along these lines. Take the outrage over police shootings of blacks. As liberals see it, the police are the oppressors, the young black men are the victims. And of course, the liberals are right. So many African-Americans have died without good reason at the hands of police.

Kling argues that our political discourse is dysfunctional because we look at the world through different lenses.

Conservatives value law-and-order. The authority of the police is crucial to keep chaos at bay. The police have a tough job. They must constantly confront violent and dangerous people who are often armed. Many of the neighborhoods the police patrol are gang-ridden and on the verge of social disintegration. And aren’t most or all of the people killed by the police criminals or potential criminals?

Conservatives stand with the police. And of course, the conservatives are right. Police play a crucial role in maintaining the conditions for normal life, especially in many troubled neighborhoods.

Libertarians worry about the coercive power of the state. Relations between the police and the communities where they work are corrupted by drug laws that restrict the freedom of people to buy what they want and take responsibility for their own choices. And because the police have the legal authority to use force, they are prone to abuse it. So it is not surprising that they shoot people from time to time.

And of course, the libertarians are right. Drug laws are a tragic failure. Eternal vigilance is the price of liberty and the police on the ground must be careful not to misuse their monopoly on the legal use of deadly force.

Or consider immigration. Liberals sympathize with impoverished people victimized by limited employment opportunities in their native countries coming here to find a better life for their family.

Is particularly useful for understanding why our political debates are so fruitless.

Conservatives fear that the cultural differences that immigrants bring may threaten the American way of life, especially if they come from countries seen as less civilized or democratic than the United States. Conservatives are particularly worried about illegal immigration because they view the lax enforcement of laws as the road to barbarism.

Libertarians don’t like the idea of borders to start with – goods and people should be free to move freely. We have no right to tell people who they can hire or where those people can live.

Of course, there are variations within each group but even these variations are related to the three lenses. Some liberals are against immigration but that’s often because they worry about the impact on the wages of low-skilled American workers who struggle to prosper because of the power of businesses to exploit low-skilled workers. Those workers are the victims of greedy profit-hungry employers.

Conservatives will sometimes support immigration because of the importance of free markets, a key part in the view of some conservatives of a civilized society.

Blind Men and an Elephant

One use of Kling’s taxonomy is how easy it makes predicting how various groups will respond to any particular policy issue. But it is particularly useful for understanding why we struggle to get along with each other and why our political debates are so fruitless.

The person you’re arguing with just doesn’t see the world the way you do.

Liberals can’t understand the views of conservatives, conservatives have no respect for liberals and neither group respects libertarians. That lack of respect leads to moral self-righteousness and endangers discourse. It also leads to a great deal of intolerance. This brilliant essay by Scott Alexander describes the problem eloquently and powerfully.

Once you realize that other groups are coming from a different place than you are, you actually can empathize with their views. It may not be as fun, but you can actually view your ideological opponents as decent human beings who look at the world differently from the way you do. And it shows the foolishness, other than for therapeutic catharsis, of yelling at your opponents oblivious to why they don’t understand the wisdom of your views. The person you’re arguing with just doesn’t see the world the way you do.

We are like the blind men and the elephant where the elephant is some social problem. We grab hold of one part of the problem and fail to see that the world is more complicated. 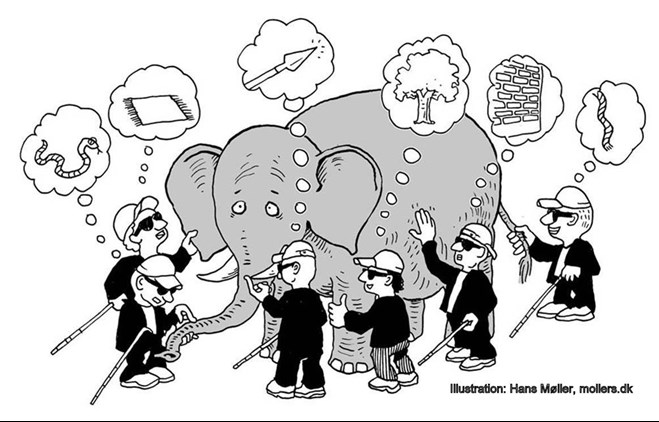 In this essay, I want to add a twist to Kling’s original vision. I want to speculate about the three blind spots of politics. Liberals, conservatives, and libertarians each have a blind spot that should give them pause and maybe reduce the confidence they have in the correctness of their position. (OK, that’s a bit of a fantasy, but I can dream.) Each of these blind spots is a natural outgrowth of the lens that each group adopts.

Liberals first. In their eagerness to empathize with the victim, they can turn the victim into an object rather than an independent actor. Poor people are so oppressed in the liberal view, they don’t just have limited agency to choose and live life in meaningful ways. They have no agency. They are simply objects manipulated by powerful people around them.

There are a variety of policies that liberals support that ignore the ability of poor people, for example, to make choices and improve their lives. One example is school choice or various educational reforms that empower parents over bureaucrats. Liberals will often condemn school choice by arguing that poor parents are simply incapable of making good choices for their children. Poor parents need to be protected from their own bad decisions. And of course, there’s some truth to this – all of us, rich and poor, can make mistakes. But if we’re not careful, we dehumanize those we wish to help by denying their potential for agency.

In their zeal to preserve civilization, they demonize those that they see as a threat to it.

I remember discussing privatizing social security with a very successful (liberal) lawyer. He explained that he would, of course, be capable of making his own investment decisions. But his secretary was a different matter. She simply wasn’t capable of that level of intellectual sophistication.

I pushed back arguing that the market would create ways for her to improve her knowledge. But the more interesting point was that he was a stock-picker. He eschewed index funds. I think I’d prefer to let his secretary manage my portfolio if his choices were the alternative.

Conservatives dehumanize in their own way. In their zeal to preserve civilization and the American way of life, they demonize those that they see as a threat to civilization. They can forget that most immigrants are hard-working individuals who want a better life for their children. They can forget that poor people face tremendous disadvantages and that while some can rise about their situation to find opportunity, the environment that many poor people live in makes making it, even in America, oh so difficult. It is not the fault of the poor that their schools are ineffective. It is not the fault of the poor that it is hard to find a job in many poor neighborhoods.

Too many conservatives see their own success as simply a result of hard work and see the poor through their eyes. That vision is often blind to the challenges so many poor people face today.

My tribe, the libertarians, has a special set of blind spots all our own. We often romanticize the power of economic freedom. We struggle to imagine that some people are poorly served by markets, that some transactions involve exploitation of ignorance and that the self-regulation of markets can fail. In our zeal to de-romanticize government, we often ignore the good that government does especially in cases where freedom might perform badly.

We should be more humble about what economic freedom can achieve.

Our worst mistake is to defend the freedom of business to do what it will in situations where government has hampered or destroyed the feedback loops of profit and loss that make economic freedom successful.

I fear too many libertarians, for example, defend Wall Street simply because it is the punching bag of liberals, forgetting that Wall Street helps make the rules that exempt the largest banks from the market discipline of profit and loss.

Perhaps our biggest weakness is that we ignore the complexity of poverty and growth. Economic freedom will always lead to good outcomes – yet the slow and corrupt situation of Eastern Europe and Russia after the fall of the Soviet Union should give us pause.

We think educational freedom and eliminating the minimum wage will end poverty, and it might. I think it certainly will help. But we ignore the role of culture and family in holding our most disadvantaged back. Incentives may help, but they rarely solve every problem perfectly. We could use a little liberal empathy for those who have a tough time. We should be more humble about what economic freedom can achieve.

I write these words at a time when I find it increasingly unpleasant to read the newspaper and my twitter feed. The level of disdain for those we disagree with runs high. It is a good time to remember the three languages of politics and to consider our blind spots as well. We look at the world in different ways. Each way has its own strengths and flaws. This is a good time in American history to keep that in mind.

Russell Roberts the host of the weekly podcast, EconTalk and co-creator of the Keynes-Hayek rap videos. His latest book is How Adam Smith Can Change Your Life. He is also a John and Jean De Nault Research Fellow at Stanford University"s Hoover institution.