Charity Is Not How We Solve Poverty

If we can afford to help, don’t we have an obligation to do it?

In a famous 1972 article, “Famine, Affluence, and Morality,” philosopher Peter Singer compared global poverty to a child drowning in a pond:

[I]f it is in our power to prevent something very bad from happening, without thereby sacrificing anything morally significant, we ought, morally, to do it. An application of this principle would be as follows: if I am walking past a shallow pond and see a child drowning in it, I ought to wade in and pull the child out. This will mean getting my clothes muddy, but this is insignificant, while the death of the child would presumably be a very bad thing." (231)

If we ought to prevent something very bad from happening whenever we can do so without sacrificing anything morally significant, then we also ought to spend much of our lives and wealth on rescuing people from starvation and disease:

It makes no moral difference whether the person I can help is a neighbor’s child ten yards from me or a Bengali whose name I shall never know, ten thousand miles away. . . [We should make] no distinction between cases in which I am the only person who could possibly do anything and cases in which I am just one among millions in the same position." (231-

Instead of buying a Starbucks coffee once a week, you could save that money – about $200 over the course of a year – and give it to a charity that saves lives. It’s morally wrong to buy Starbucks coffee when there are people dying around the world. Letting someone die so that you can enjoy Starbucks is like letting a child drown rather than getting your suit muddy.

It doesn’t matter that most other people aren’t living up to their moral obligations. Bystanders’ failure to save a drowning child doesn’t relieve you of a duty to save that child. If you can save a life without sacrificing anything morally significant, you must.

To live up to a moral duty to save every life, we’d have to spend our entire lives going from pond to pond.

What should we make of this argument? The analogy between saving someone from extreme poverty and saving a drowning child seems strong. Millions of people around the world die young (or at birth) due to disease and malnutrition. We in affluent countries spend much of our wealth on luxuries. In fact, we eat too much and watch too much TV. Can’t we afford to spend a lot of that wealth on helping save others’ lives? And if we can afford it, don’t we have an obligation to do it?

Singer’s argument faces two main difficulties. First, he thinks it’s obvious that consuming luxuries isn’t morally significant. But is that right? Perhaps having your once-a-week Starbucks can be as morally significant as saving a life, strange as that may sound. Second, he thinks saving poor people’s lives is about as simple as wading into a pond and dragging a drowning child out of danger. But in fact it might be a lot more complicated.

Let’s think about the first point. Global poverty is a really big problem. There are millions of people suffering from extreme poverty and a very high likelihood of early death. If it were always wrong to consume a luxury whenever there were someone whose life could be saved instead, we would in fact be morally obligated never to consume any luxury, and to spend essentially our whole surplus wealth and time on saving people. It’s as if there were millions of ponds with millions of children drowning in them. To live up to a moral duty to save every life, we’d have to spend our entire lives going from pond to pond.

That kind of life might not be worth living. You’d be turning yourself into a virtual slave of the people you save. Your life would have no value to you, because you would have no opportunity to put an individual stamp upon your plans, projects, and desires. Your whole life would be predetermined from the outset: work as hard as you can so that you can save as many people as you can, and never do anything else.

Where Does Duty Lie?

You might have a duty to save lots of people without having a duty to forego all the pleasures that make life worth living: making friendships, developing hobbies, reading, creating, and, yes, even consuming. A once-a-week Starbucks might actually be morally significant to your personality (to me, it would be my home-brewed cup of oolong, but preferences vary).

If giving to a charity empowers a vicious gang or government that keeps people poor, you’ve just made poor people’s lives worse.

It isn’t clear at what point it becomes morally permissible for us to focus on our own desires rather than spending our resources on saving others, but it’s definitely well before the point of “marginal utility” (when you become as bad off as someone in extreme poverty). The point isn’t that you don’t have a duty to save people – you do – but there are limits, real though difficult to nail down precisely, to the duty.

The second point is that saving people isn’t simple. Giving money to a charity that claims to help people may not do very much good and may even do net harm. Extreme poverty in the world today is generally the fault of some human organization or institution, usually a government but often rebel groups, gangs, and other purveyors of violence.

People lift themselves out of poverty when they are free to trade and to enjoy the fruits of their labors. They remain poor only when they face violent threats to their lives, liberties, and property. If giving to a charity empowers some vicious gang or government that keeps people poor, you’ve just made poor people’s lives worse. This consideration doesn’t relieve us of the duty to give, but simply adds a duty to investigate seriously the consequences of our gifts before we make them.

To his credit, Peter Singer now realizes this problem, and the website he started, thelifeyoucansave.org, carefully evaluates antipoverty charities for efficacy. Most of the charities they highlight have shown, through randomized controlled trials, that their efforts are actually making people’s lives better. (I would take exception to the inclusion of Oxfam, which has been taken over by ideologues who seem to care more about rich-world politics than doing anything about real poverty.)

We do have duties to help those less fortunate, especially in developing countries, where extreme poverty of a kind we can barely imagine is all too commonplace. But we should also bear in mind that the biggest reductions in poverty haven’t come from foreign aid but from economic policy reform. 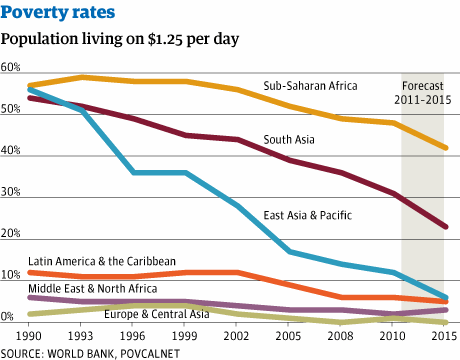 Extreme poverty is falling around the world, mostly because governments have chosen to let their people join the global marketplace. The biggest reductions in poverty have happened in China, where post-1980 market reforms have raised 680 million people out of poverty.

One of the most important things we can do to better the lives of the poor is to fight for their access to property rights and to global markets.

Reprinted from Ethics and Economics Education.

Jason Sorens is a lecturer in the Government Department at Dartmouth College and received his Ph.D. in political science from Yale University in 2003. He is also vice president of the Free State Project.