Cash for Clunkers Was a Complete Failure

Scholars confirmed that the program didn’t have any long-run impact.

Keynesian economics is fundamentally misguided because it focuses on how to encourage more spending when the real goal should be to figure out policies that result in more income.

But let’s set all that aside because we have new evidence that Keynesian stimulus schemes aren’t even very good at artificially goosing consumption.

The Impact of Cash for Clunkers

Three economists (from MIT and Tex A&M) have crunched the numbers and discovered that Obama’s Cash-for-Clunkers scheme back in 2009 was a failure even by Keynesian standards.

The abstract of the study tells you everything you need to know.

The 2009 Cash for Clunkers program aimed to stimulate consumer spending in the new automobile industry, which was experiencing disproportionate reductions in demand and employment during the Great Recession. Exploiting program eligibility criteria in a regression discontinuity design, we show nearly 60 percent of the subsidies went to households who would have purchased during the two-month program anyway; the rest accelerated sales by no more than eight months. Moreover, the program’s fuel efficiency restrictions shifted purchases toward vehicles that cost on average $5,000 less. On net, Cash for Clunkers significantly reduced total new vehicle spending over the ten month period.

This is remarkable. At the time, the most obvious criticism of the scheme was that it would simply alter the timing of purchases.

And scholars the following year confirmed that the program didn’t have any long-run impact.

But now we find out that there was impact, but it was negative. Here’s the most relevant graph from the study. It shows actual vehicle spending and estimated spending in the absence of the program. 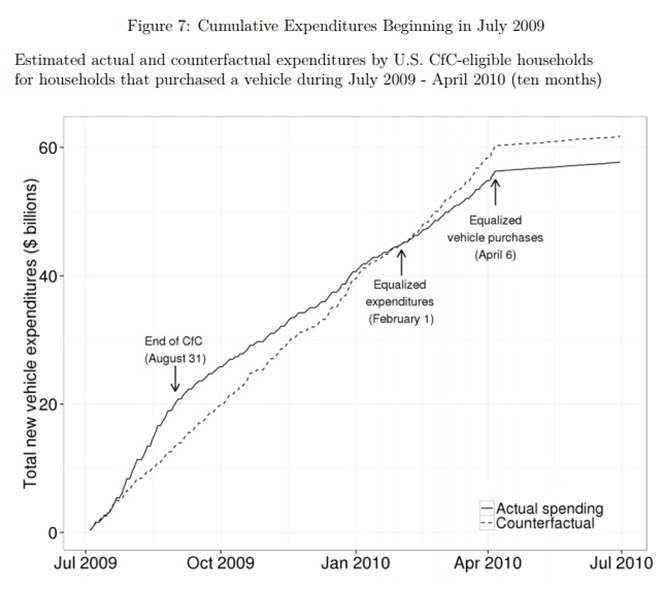 For readers who like wonky details, here’s the explanatory text for Figure 7 from the study.

The effect of the program on cumulative new vehicle spending by CfC-eligible households is shown in Figure 7. The figure shows actual spending and estimates of counterfactual spending if there had been no CfC program. Cumulative spending under the CfC program was larger than counterfactual spending for the months immediately after the program. However, by February 1 the counterfactual expenditures becomes larger and by April has grown to be $4.0 billion more than actual expenditures under the program. It is difficult to make the case that the brief acceleration in spending justifies the loss of $4.0 billion in revenues to the auto industry, for two reasons. First, we calculate that in order to justify the estimated longer-term reduction in cumulative spending to boost spending for a few months, one would need a discount rate of 208 percent. Given the expected (and realized) duration of the recession, it seems difficult to argue in favor of such a discount rate. Second, we note that Cash for Clunkers seems especially unattractive compared to a counterfactual stimulus policy that left out the environmental component, which also would have accelerated purchases for some households without reducing longer-term spending.

By the way, the authors point out that Cash-for-Clunkers wasn’t even good environmental policy.

One could also argue that this decline in industry revenue over less than a year could be justified to the extent the program offered a cost-effective environmental benefit. Unfortunately, the existing evidence overwhelmingly indicates that this program was a costly way of reducing environmental damage. For example, Knittel [2009] estimates that the most optimistic implied cost of carbon reduced by the program is $237 per ton, while Li et al. [2013] estimate the cost per ton as between $92 and $288. These implied cost of carbon figures are much larger than the social costs of carbon of $33 per ton (in 2007 dollars) estimated by the IWG on the Social Cost of Carbon [Interagency Working Group, 2013].

So let’s see where we stand. The program was bad fiscal policy, bad economic policy, and bad environmental policy. The trifecta of Obamanomics. No wonder the United States suffered the weakest recovery of the post-WWII era.

P.S. David Letterman had a rather amusing cash-for-clunkers joke back in 2010.