Capitalist Reforms Are Boosting Prosperity in the Baltics

I’m a fan of the Baltic nations in part because they were among the first to adopt flat tax systems after the collapse of the Soviet empire. But tax reform was just the beginning. Estonia, Latvia, and Lithuania have liberalized across the board as part of their efforts to become prosperous.

Economic Freedom of the World is always the first place to check when you want to understand whether countries have good policy. And the dataset for the Baltic nations does show that all three nations are in the top quartile, with Lithuania and Estonia cracking the top 20.

So are these market-oriented policies paying dividends? Has the shift in the direction of free markets and limited government resulted in more prosperity?

The European Central Bank has released some very interesting analysis on the economic performance of these countries.

The Baltic States have been able to maintain an impressive rate of convergence towards the average EU per capita income over the past 20 years. …these three countries have each pursued a strongly free-market and pro-business economic agenda… The three countries are different in many ways, but share a number of key features: very high levels of trade and financial openness and very high labour mobility; high economic flexibility with wage bargaining mainly at firm level; relatively good institutional framework conditions; and low levels of public debt.

And this has translated into strong growth, which has resulted in higher incomes.

The Baltic States are among the few euro area countries (along with Slovakia) in which real GDP per capita in purchasing power standard (PPS) terms has shown substantial convergence towards the EU average over the last 20 years. While in 1995 their average per capita income (in PPS) stood at only around 28% of the EU15 average, in 2015 it reached 66.5% (see Chart A).

Here’s the chart showing how quickly the Baltic countries are catching up to Western Europe. 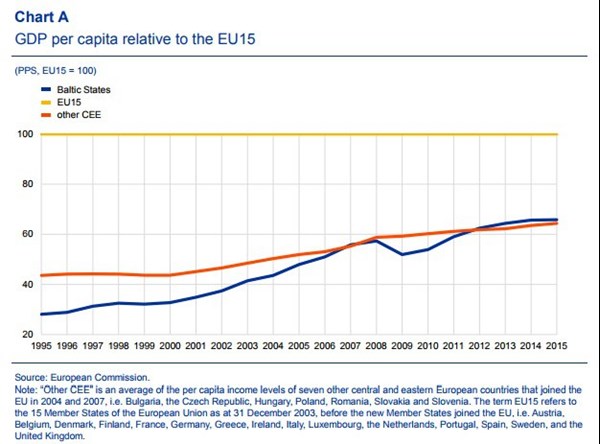 The ECB report also measured how fast the Baltic nations have grown compared to theory.

The long-term convergence performance of the Baltic States has exceeded what would have been expected based on their initial income level.

And here’s the chart showing how they have over-performed. 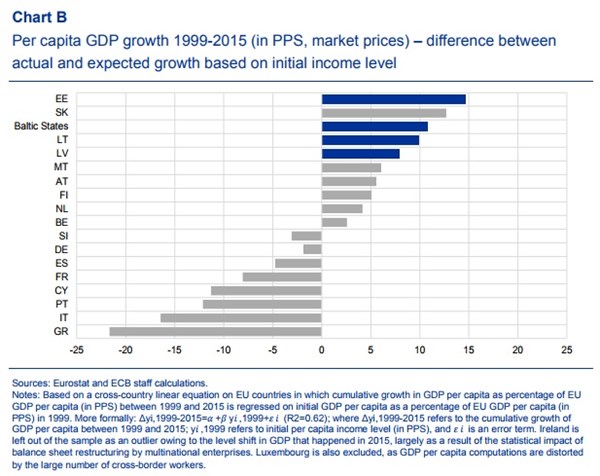 The ECB study says that the Baltic countries have been especially good about replacing cronyism with the rule of law.

I agree. Indeed, I’ve written that Estonia is a good role model, having reduced corruption by limiting the power of politicians and bureaucrats.

The report also credits the three countries with rapid rebounds from the financial crisis, which is a point I made back in 2011.

Though the report does warn that there are not guarantees that the Baltic countries will fully converge with Western Europe.

This is a good point. As I explained two years ago, full convergence is very difficult. North America and Western Europe became rich in part because of very small public sectors in the 1800s and early 1900s. Indeed, there was virtually no welfare state until the 1930s and the level of redistribution was comparatively small until the 1960s.

Unfortunately, this is one area where the Baltic nations are weak. Yes, the burden of government spending may be modest compared to other EU countries, but the public sector nonetheless consumes more than 35 percent of GDP. And even though these nations have flat taxes, they also have stifling payroll taxes and government-fueling value-added taxes.

Another problem (not just in the Baltic region, but all through Eastern Europe) is that the demographic outlook is unfriendly, which means that the welfare state automatically will become a bigger burden over time.

If the Baltic countries want genuine convergence (or if they want to surpass Western Europe), that will require additional reform, particularly efforts to reduce the burden of government spending to the levels found in Hong Kong and Singapore.

Unfortunately, it’s more likely that policy will move in the other direction. There are constant efforts to repeal the flat tax systems in the Baltic countries. And efforts by the European Commission to harmonize business taxation ultimately may undermine the pro-growth approach to business taxation in the region as well.

P.S. For those who want an in-depth look at a Baltic nation, I recommend this video about Estonia. And if you want some amusement, check out how Paul Krugman wanted people to believe that Estonia’s 2008 recession was caused by 2009 spending cuts.