The Most Hated Chore in the History of Housework

Laundry might be one of the most hated chores in the history of housework. It’s a Sisyphean task. The moment the job is done, there’s more laundry to do. And unlike cooking, which can be put off by ordering pizza or going out to eat, or dishes, which can be reduced by using paper plates, the laundry has to be done regularly. (Unless you’re a college student, of course.) 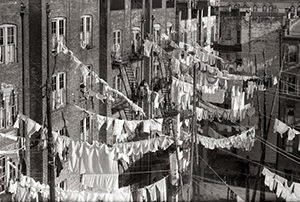 Our vision of what laundry “used to be like” has very little to do with what it actually was like.

And so we complain about laundry all the time. And economists and others study it.

I started to think about laundry this week when a blog post that collected eight decades of images of clotheslines in New York crossed my desk. The images are a striking reminder of how laundry used to be done.

Scrolling through those images was an odd experience. I looked at them and admired the graceful arcs of the clotheslines and the ghostly flutter of the laundry that hung from them. I was reminded of “Love Calls Us to Things of This World,” a poem by Richard Wilbur about waking to the sights and sounds of laundry on the line. To the poet’s sleep-hazy and unspectacled eyes, the laundry on the line makes it look as if “the morning air is all awash with angels.” And the beauty of the vision prompts the poet’s soul to wish,

Oh, let there be nothing on earth but laundry,
Nothing but rosy hands in the rising steam
And clear dances done in the sight of heaven.

It’s easy to look at laundry on the line and be swept away by memories of sun-dried sheets. But as with so many other tempting misconceptions that come when we are rich enough to play at being poor, our vision of what laundry “used to be like” has very little to do with what it actually was like.

For that, we have to turn from photographs to contemporary accounts.

When I’m looking for accounts of housework in earlier decades, I turn to Round about a Pound a Week, an exceptional demographic study of the working poor in 1913 Lambeth, a district in central London. But Round about a Pound is all but silent on the subject of laundry. I was mystified about why laundry was absent from a study that details everything from how the women of Lambeth chose to wash their front steps to why they bought flannelette clothing for the children. But the chapter that details how these women spent their days includes a small aside. When the study was done, the subjects told the observers not to record their schedule on washing day. “Washing-day was not considered fair by the mothers. They said, ‘You’d expect ter be a bit done-like washin’ day’; so an ordinary day was chosen in every case.”

The women in Lambeth knew laundry day was the hardest day of the week. They knew it was a statistical outlier, and they didn’t want an unfair assessment of how hard their average day was.

That, in itself, is telling.

But actual descriptions of laundry days are even more so. In 1949, Kate Smallshaw (a former editor of Good Housekeeping) wrote a determinedly cheerful book on housework called How to Run Your Home without Help. Marketed to the middle-class housewife learning to do without servants during the postwar domestic labor shortage, How to Run Your Home without Help was able to assume that its readers would have running water and electricity, unlike the women studied in Round about a Pound.

Even with plumbing and electricity, the 10 pages dedicated to “Doing the Washing” in How to Run Your Home make for exhausting reading. Describing a “very efficient single-handed housewife” and her average laundry day, Smallshaw notes,

She knew the right way to tackle every household job, and took a pride in doing them all well. Yet with her practice she still finds Monday an ordeal. One reason is that her equipment is so poor. Her single sink, with one draining-board only, is placed in a corner. The wash-boiler, of the round type, won’t take a wringer. She could get a new kind of wringer that would fasten to the edge of the sink … but she makes do with the old one that must be lugged in from the garden shed each time.… On a bright day she can get the clothes dry in the garden; otherwise there’s the misery of lots of wet things flapping round the little kitchenette, for she has no drying cabinet of any kind.

But even with the modern equipment lacked by this housewife, the laundry is an almost unimaginably arduous task when looked at from 2016. Here, for example, is Smallshaw’s description of the newly popular “hand operated simple washing machine”:

The machine is filled, by means of rubber tubing, from the kitchen tap. The water is then heated to the temperature required by gas or electricity, depending on the make of machine. Clothes can be left to soak, boiled up if necessary, or mechanically washed by means of a hand-operated “agitator.” They are then wrung into the kitchen sink for rinsing.

More expensive, newly available electric washers could help even more, though they still generally required manual filling and draining. And only the most expensive machines available came even close to approaching the luxurious kind of washer we can pick up for under $500 at Walmart or Sears today. (And we earn the money to buy that washer so much faster!)

But this only considers the issue of equipment. Smallshaw’s housewife had many other concerns that don’t even occur to today’s laundry doers: the need to run each item of clothing through the wringer twice; the separate boiling of handkerchiefs; the endless task of ironing. (Smallshaw does note that certain items, such as “all stockings and socks, woolen underwear, and men’s cellular or knitted-type cotton underwear, needn’t be [ironed], if time is an important factor.”)

All of this makes those photographs of the New York clotheslines a little more interesting and a little less dreamy. Notice that the laundry drying in those pictures is nearly all underwear, petticoats, sheets, and other whites. Washing the darker outer layers of clothing would have been done less often, because of the great weight (especially when wet) and extended drying time. Remember that in days when most homes heated with coal, those whites wouldn’t have stayed white for very long as they hung in the smoky air. 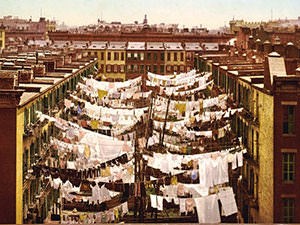 Picture a cold and rainy day, with all that wet laundry hanging in the tiny kitchen of your walk-up apartment in New York.

Those women who are leaning out their windows to hang out the wash may look quaint now, but they had been working at this task all day. And they would do it again the following week. And every single week after that. And those clotheslines? They may make a pretty picture in sunny weather, but picture a cold and rainy day, with all that wet laundry hanging in the tiny kitchen of your walk-up apartment in New York.

Consider all that, and then go watch Hans Rosling’s magic washing machine video, and remember how much of the world today still does their wash in conditions even harder than those of 1949, or even 1913.

Recent advances in nanotechnology have created textiles that clean themselves with light. Fans of mid-century science fiction will instantly think of the Alex Guinness movie, The Man in the White Suit, where the invention of a similar product leads to panic among textile plant managers and union workers. While many are sure to react to this news with similar distress and to lament the loss of the picturesque clothesline, Hans Rosling and I say bring it on. As a little visit to the laundry rooms of the past reminds us, every minute we now spend doing laundry — no matter how few those minutes are — could be more joyously spent doing almost anything else.