Assuming Bolsonaro does what is right for his country, the new president's finance minister could be the Jose Pinera of Brazil.

Brazil appears to be a tragic example of what happens when societal capital erodes (or never gets established in the first place) and too many people in the country see government as a vehicle for redistribution. That environment leads to statist policies. 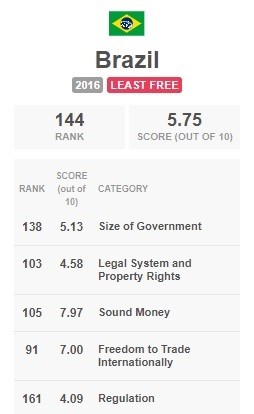 This presumably helps explain why Brazil is ranked #144 in the Economic Freedom of the World report. That’s not as low as some of its neighbors, such as last place Venezuela (#162) or close-to-last Argentina (#160), but it’s still miserable. The country definitely deserves to be in the “Least Free” group.

Today’s question is whether Brazil also belongs in the “give up hope” group. In other words, has the country passed a “tipping point” of big government?

I’ve previously speculated on whether the United States eventually may reach that point, and I definitely think it’s a relevant issue for states like Illinois and nations such as Greece.

A few weeks ago, I would have put Brazil in the same category. But the nation just elected Jair Bolsonaro, a right-populist who promises to shake things up when he takes power.

Mauricio Bento of Brazil’s Instituto Mercado Popular explains that Bolsonaro won in part because of a weak economy:

Most of the coverage from international media has been simplistic and is mostly repeating cliches, such as calling him the “Brazilian Trump”. …you might have read about how “terrible” Bolsonaro is, and you might be wondering how he managed to win by such a wide margin. …In the last four years, Brazil has been in a deep economic crisis, suffering from double-digit unemployment rates and a lack of confidence that a recovery is coming.

And in part because his opponent, Fernando Haddad, wanted to undo a handful of recent pro-growth reforms and make Brazil more like Venezuela:

Michel Temer. …passed some important reforms, such as the spending cap amendment and the labor law reform. …Haddad sought to repeal Temer’s reforms and increase government spending and taxes. This made many business owners and investors support Bolsonaro.

Since I am a big fan of the spending cap that was approved in late 2016, I’m glad Haddad didn’t win.

But should anybody be happy that Bolsonaro won? I don’t know the answer to that question, but it looks like Brazil is about to have a very good finance minister.

The UK-based Financial Times has an encouraging report:

For Brazil’s new finance minister Paulo Guedes, the government of far-right president-elect Jair Bolsonaro could represent a “Pinochet” moment for Latin America’s largest economy. Mr. Bolsonaro, who won elections last Sunday, ending almost 15 years of left-wing rule, will take over a moribund economy burdened by a bloated public sector when he assumes office on January 1. …The Chilean dictator’s solution was a dose of Milton Friedman-style free market economics from University of Chicago-trained academics. Mr. Bolsonaro is considering the same medicine in the form of Mr. Guedes, who has a doctorate from Chicago… For supporters of Mr. Bolsonaro, the 69-year-old Mr. Guedes’ uncompromisingly free market view of the world is the only answer. “Liberals know how to do it,” Mr. Guedes once said.

He definitely has a pro-growth agenda:

Mr Guedes—who first considered joining Mr. Bolsonaro’s campaign only last year—has repeatedly said his priority is to end Brazil’s 7 percent fiscal deficit through privatizations of the country’s 147 state-owned enterprises. ...Mr Guedes’ other plans include a radical simplification of Brazil’s tax system, one of the world’s most convoluted, and reforming the country’s costly pension system, which is threatening to overwhelm the budget.

Sounds like Guedes has the right ideas. Assuming Bolsonaro does what is right for his country (such as enacting much-needed pension reform), Guedes could be the Jose Pinera of Brazil.

Here’s a chart from Economic Freedom of the World. It shows how economic liberalization produced a dramatic increase in freedom between 1975 and 1995. Chile is now ranked #15 for economic liberty. Brazil, by contrast, has slowly lost ground since a period of pro-market reform between 1985 and 2000.

I’ll close with a video that was released before the recent Brazilian election.

It’s directed to mushy-headed young people in America, but it neatly summarizes how Brazil got in trouble.

A great video. I especially appreciate the indirect endorsement of my Golden Rule. The criticisms of former President Lula also are spot on, though I once expressed perverse admiration for him.

P.S. Bolsonaro is good on gun rights, so that’s a positive sign.